A referee timekeeping error might seem a little odd, but it recently happened in the Dutch top league. In this case study you’ll see an example how you can get wrong with your time-keeping, an explanation on how to handle and some tips to prevent you from making these mistakes. 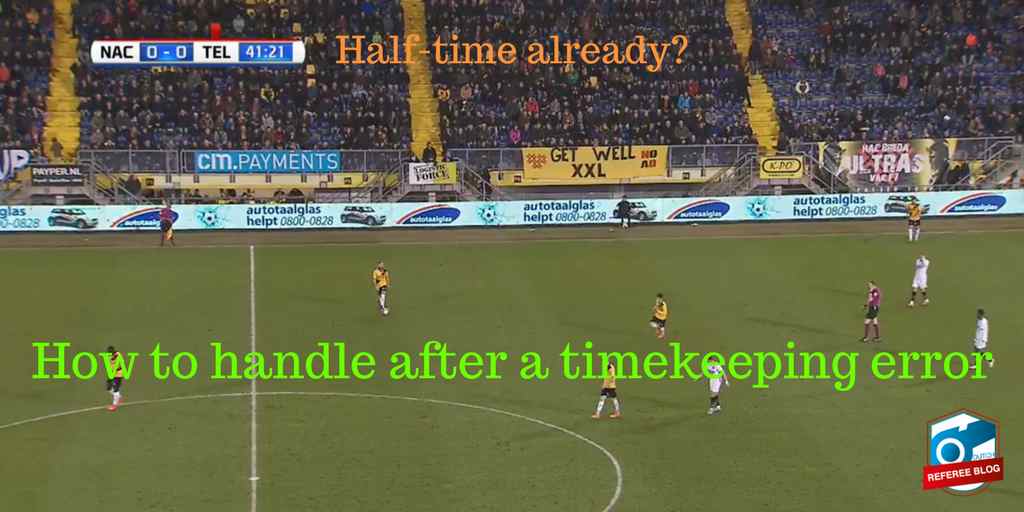 Referee timekeeping error: Ed Janssen whistles for the end of the half after 41 minutes

Firstly, a personal story. I officiated a game and a digital clock near the pitch was also keeping the time and scores. Quite useful so players won’t ask you all the time how long they have to score. It went fine in the first half, but they started the clock too late in the second half. Maybe about five minutes.

And that’s a lot.

On my watch 90 minutes were played and I added a few mins injury time. But when I blew the finale whistle the clock near the pitch told the players and fans 88 mins had been played. That’s when you get a lot of comments, I can tell you, especially when there is a one goal difference. I could show my own watch that said 93 mins, but then damage was already done.

But you can also whistle too early for the end of the first half and that’s what happend in the highest league in The Netherlands.

Referee explains what happed in the Eredivisie

Referee Ed Janssen explains the situation in the game between NAC and Telstar. “I discussed at the end of the half with my fourth official if injury time is needed. Our verdict: one minute would be sufficient. I watched at the clock in the stadium and saw 45 minutes. Then I see the fourth official with the board with the number one on it. We continued to play one minute, and I whistle for the end of the half. I walked off the pitch, and NAC’s assistant coach comes to me and says that we have played only 41 minutes and 21 seconds. I check my watch and see that he’s right. With the four of us, we relied on the stadium clock. That’s we shouldn’t have doen, I should have checked my watch. My own watch didn’t let me down. NAC’s clock had problems due to humidity and that’s why it failed. The second half I did not use it. A lesson for the next game.”

How to handle after a timekeeping error

The Laws of the Game tell a few important things. The first is that a “referee must not compensate for a timekeeping error during the first half by changing the length of the second half.”

So no second half that lasts for 47 minutes plus injury time.

The rules also tell that “a match lasts for two equal halves of 45 minutes, which may only be reduced if agreed between the referee and the two teams before the start of the match and is in accordance with competition rules.”

Nobody has agreed to play 43 minutes before the game, and the competitions rules will probably forbid it. The solution here is finishing the first half.

As the reporter tells in Dutch: both teams are defending the same goal as in the first half. Ever wondered how to restart play? In this situation the ball was in play when you blew for the final whistle. That means you have to restart play with a dropped ball. If the ball was out of play, the game needs to be restarted for the reasone the ball had left the field.

And when the 45 minutes of the first half are played, whistle for half-time and change sides immediately. Teams have been to the dressing room, so don’t stop play for another 15 minutes.

How do you keep time? Did you ever have any problems with timekeeping during the game? Please share your experiences below.