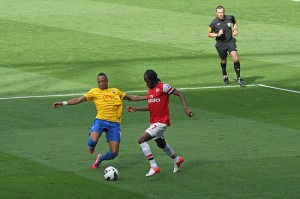 Referee stats Premier League 2012/2013: referees doing a good job. And did you know that referees do more in-game high speed runs than players? Check out the most remarkable referee statistics from the 2012-2013 Season Review by the organisation of the highest football league in England.

Download the full report by the Premier League about the referees. The images in the pdf are also worth watching. Nice work from the graphic editor.