Referee positioning at counter-attacks, that’s difficult as you have to change a pace fast and your response needs to be quickly. Leicester City has shown some great counter-attacks before. They get the ball and pass forward fast and their strikers are very effective. Are you able as referee to anticipate to that? Check out these lessons below.

The screenshots of the Leicester counter-attack are still there and give you a great impression. To have an idea of how fast a counter-attack can go, I’ve found another example, from Belgium – Japan, to give you an impression. Please take a good look at the referees. How do they react to the change of play?

You probably have noticed play goes fast and it’s not always possible to the referee to keep up with that. Not to say the referees are doing wrong, but it shows you that it’s very difficult to keep up with play. Below I’ll give some tips on how you can minimise that and anticipate better on counter attacks.

5 things that symbolize a counter attack

The Laws of the Game mention the counter attack: “In counter-attack situations, the AR should be able to give information such as whether or not a foul has been committed and whether a foul was committed inside or outside the penalty area, and what disciplinary action should be taken. The AR should make a clear movement along the touchline towards the halfway line to indicate when the offence took place outside the penalty area.”

Yes, I believe it is very important that your assistant referee can help you. But as referee you want to be able to follow play as well. You want to be in the right position. A Concacaf presentation I’ve seen describes it very accurate. “Mobility = being able to get ‘somewhere’ (fitness). Positioning = knowing where that ‘somewhere’ is.” Football teams have to anticipate to only one other team, as referee you need to anticipate on both.

As referee you’ll have such steps well. I’ve distilled the 5 steps for referees based on the one’s for players – and yes, they’re quite similar.

As referee you need to be aware of your surroundings. What happens on the pitch? What can be the next situation you have to focus on? You need to be able to read the game, recognize what players might do.

I’ll show in a picture below (that I took from the video) what the referee has to notice:

There is a player who wants to prevent the goalie from releasing the ball. And if you have a broader look, you’ll see five attackers that are even with the goalie or closer to Leicester’s goal-line. There must be plenty of space for a counter-attack because there are less defenders from Manchester United.

The goalie gets the chance to throw the ball forward a teammate, so regain position. In the clip you’ll see the referee turn his head to the player who was jumping in front of the goalie. Keep that short, focus on how play develops. As you can seen the referee has changed his direction already with his back to the Leicester goal. 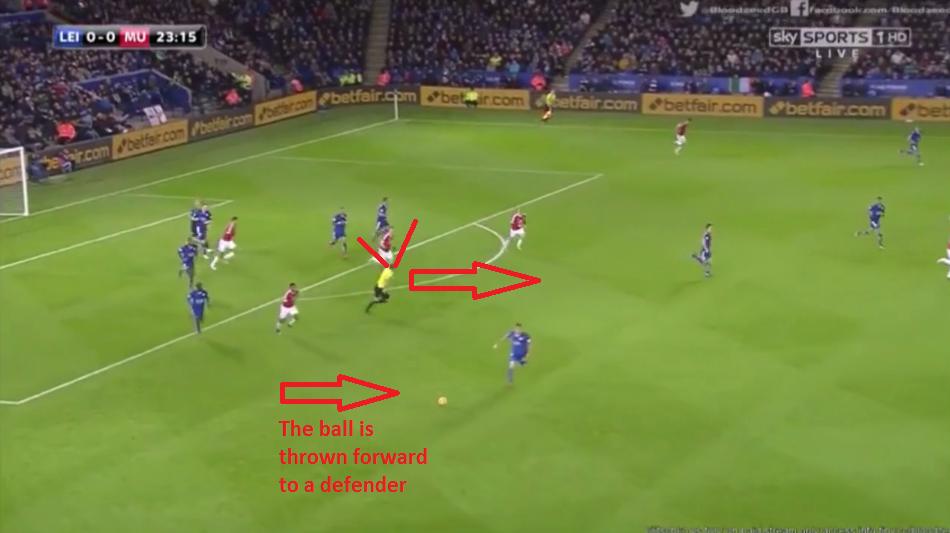 The early reaction has a lot to do with regaining position. They might have been under the same subheading, but I’d like to follow the 5 steps as mentioned in the video. What is the first thing you’d do when you expect a counter-attack? Yes, RUN!

In the picture below you’ll see the referee is looking back to the Manchester United player. My advice: don’t focus too much on something that happened earlier on, especially when there is no opponent near it, so you don’t have to expect any problems.

The good thing you see from image is that you see that  the referee is running forward. And fast. He anticipates on the possibility of a counter-attack. 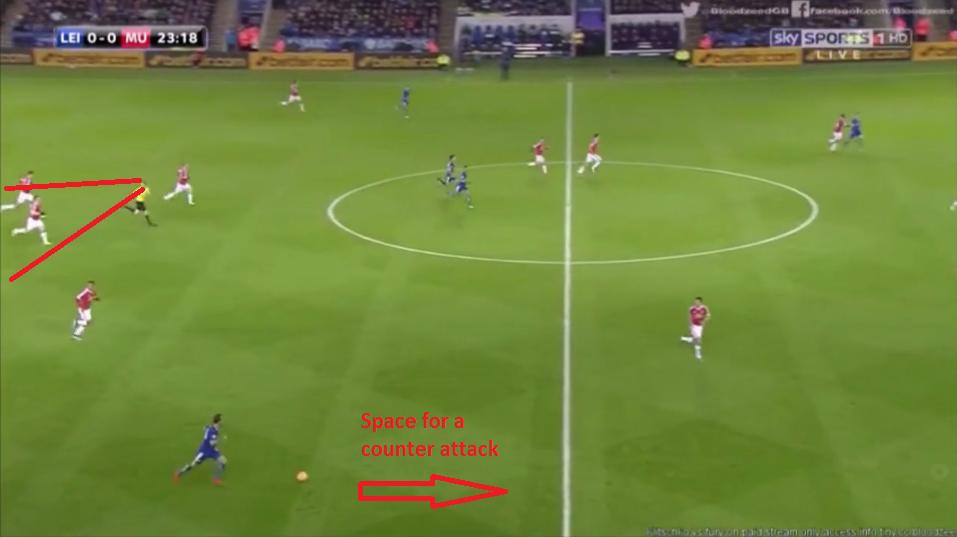 Once you’ve made that decision to go forward, you need to keep following the attack. The number 28 has stopped to see where he can pass the ball. That gave the referee some time to covere all the distance and he is shortly behind the ball.  But keep in mind, a ball goes faster than you can run, so keep moving forward and follow the attack. If the right midfield player passes the ball forward, you have a lot of metres to run to be close to the situation again. 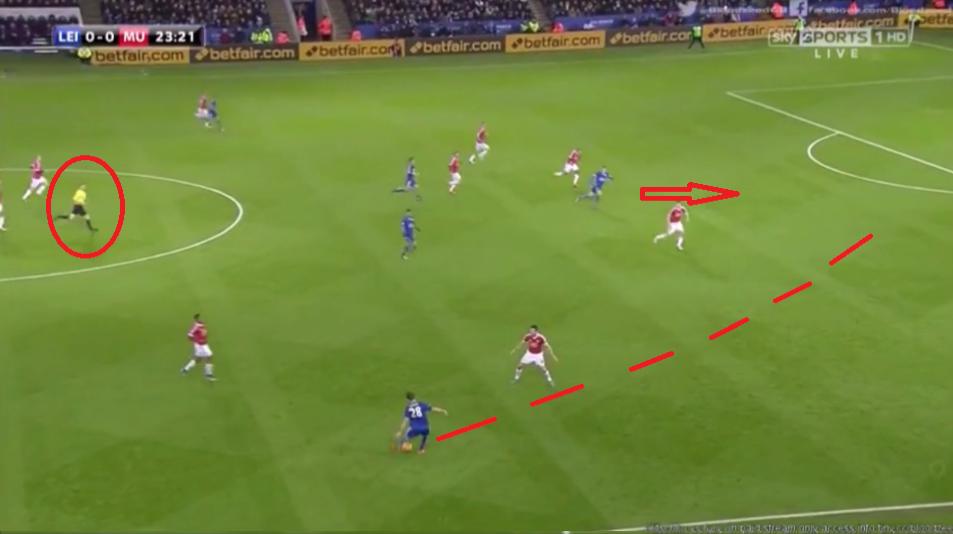 In the end, all you want to do is making the right decision. So your (end) position when something happens needs to be good. The referee would ideally have been a bit closer to the situation compared to the picture below. He has a clear view, but could have been closer. In this situation Vardy scores for Leicester, but what if the defender tackled him? Or did he play the ball?

Below I summarized some tips for positioning at a counter attack. 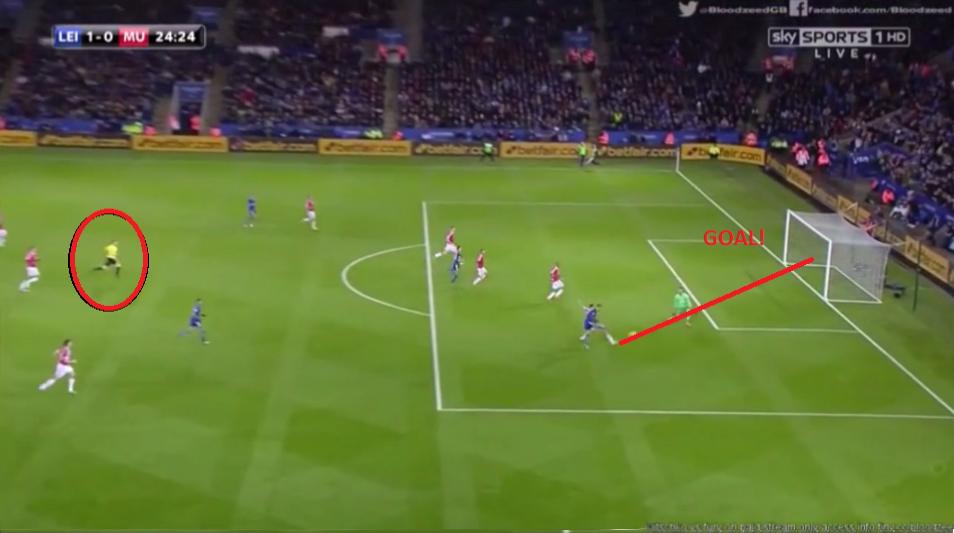 Tips for referee positioning at counter-attacks

Being in the right position is more than being able to run fast. You need to be able to anticipate on the situation and choose your position smartly. The Concacaf experts give you three simple tips for anticipating counter attacks as referees:

How do you keep fit enough to be able to anticipate on counter-attacks? How often do you train?

5 thoughts on “Referee positioning at counter-attacks”