Referee Massimo Busacca squatted on the ground. He takes a quiet moment for himself in preparation of the match Sweden versus Greece at the 2008 European Championship in Austria and Switzerland, his home country.

There’s a rosary on the table in the dressing room. Busacca makes the cross sign, he’s ready for it. Together with is assistants he leaves the quietness of the changing room to deliver a good performance with roaring crowds in the stadium.

This intimate moment from the movie Kill the referee (originally produced as Les Arbitres) shows the human aspects of the referees. And that’s exactly what Uefa aims with this documentary. The European soccer association and their referee committee want to show that the top referees are normal people who prepare professionally and they want to set a quality performance.

In regular sport broadcasts the players get full attention. But when a referee’s name is in the pages of the newspapers or on the tv programmes, there’s a big chance he made a mistake. Two recent examples are the mistakes by Roberto Rosetti (offside Tevez) and Jorge Larrionda (goal Lampard) in the matches for a spot in the quarter finals at this World Cup in South Africa.

The film is a unique documentary, because the football fans never got such a personal insight in the life of professional referees. Producer Jean Libon got access to the dressing room, the hotels and family meetings. His camera team was even able to film the family of the referees at home, who were shown as the greatest supporters of their husband, father or son.

“This openness from Uefa shows their professional approach towards referees”, says Jaap Uilenberg, former international referee and at this moment member of Uefa’s referee committee. “An interview wit a referee was not done a few years ago.” He stressed that the Dutch FA is more open since a few years ago when they get such requests.

In many European countries there is criticism about the invisible wall between them – coaches, players and supporters – and the refereeing business. For example England, where Arsenal coach Arsene Wenger openly criticised the FA of not giving openness about the referee appointments.

Kill the referee is a start to present the referees with an open approach. “Inside the referee committee we’ve extensively discussed how to handle this”, mentioned Uilenberg. “This movie shows that the referee is also a top sportsman. And a normal human being.” The documentary shows that all referees, like each soccer team and all fans, look forward to reaching the final. “For young referees the movie can be a motivation to strive to such a goal.” 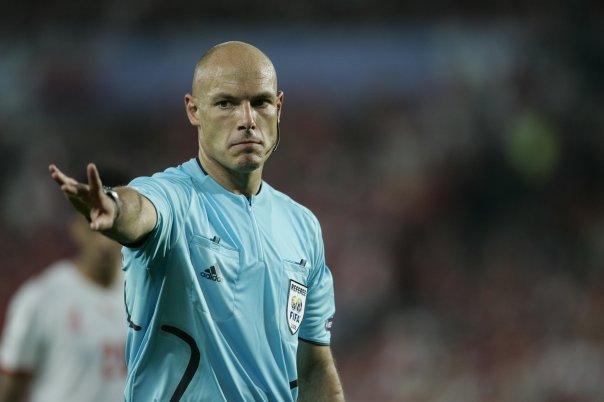 Howard Webb during Euro 2008. Shot from the movie Kill the referee

Uilenberg is also acting in Kill the referee. He’s guiding, mentoring and judging Howard Webb in the match between Austria and Poland. Because of awarding a penalty kick in the last minute against Poland he gets death threats and the then Polish president Lech Kascynski, who died recently in an air crash, makes it more worse when he was very negative about the referee in the worldwide media.

NB: Uefa did not blame Webb for the penalty kick, but he was sent home because of an offside goal which was not seen by Webb’s assistant.

Uilenberg: “The only thing you can do against the behavior of such people is to take care of the safety of the referee and his family back home.” He shows his aversion of people who call themselves fans, but really aren’t by threatening referees. “The boundaries are shifted according to many years ago. But when the producer can show such reactions, the movie gives a good representation of the life of modern refereeing.”

This documentary illustrates perfectly how important such a big tournament is for some fans and players. A wrong call of the referee can have enormous effects. The movie gives the man in black a human character, who actually can make mistakes. Busacca shows that in a touching way in his reaction to protesting players: “We are no gods, we make mistakes.” When his match is finished he makes the cross sign, and looks up to heaven. 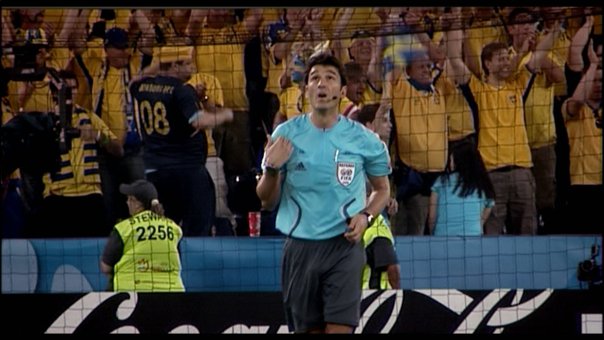 Busacca makes the cross sign and looks up to heaven. Shot from the movie Kill the referee

This article has been translated and is originally published in Nederlands Dagblad (Dutch Daily), a christian national newspaper in The Netherlands where I’ve worked as freelance journalist. You can read the original on the Kill the referee Facebook page.