A referee with ambitions who has set his goals straight: he wants to be a a Football League referee in the Season 26/27 season. It’s Lewis Hope, a 13-year-old miniwhistler from Dorset. In an interview with Dutch Referee Blog he tells that he prefers to live in Hungary because Viktor Kassai is his sporting hero. 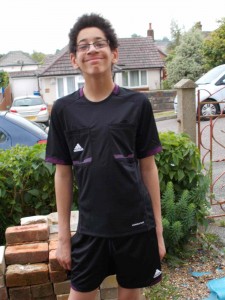 My name is Lewis. I am 13 years old and I am a miniwhister in Dorset in the UK.

When and why did you become a referee?

I am not a qualified referee yet. In the UK we cannot take our basic referee course until we are 14 so I have another 1 year and 2 months before I can even qualify as a proper referee. In season 2012/13, I did a miniwhistler course just after my 11th birthday, although you are meant to be 12 before you are allowed to do it. I was given permission to do it a year early though. It meant that I could referee games at my school for children at least 1 year younger than me. I refereed my first game at age 11 years and 5 weeks at my primary school. I had a lot of support during the game, my PE teacher was on the pitch with me ready to take over if I couldn’t cope or lost control and my Mum and another teacher supervised my 2 assistant referees.

I have always wanted to be a referee. Andre Marriner got me into refereeing when I was just 2, he and my Mum are friends and he has encouraged me ever since then. He is a big support to me. By the time I was 4/5, when I went out to play football with my friends they would run about kicking the ball and I would run about with them with a whistle in my mouth and red and yellow cards in my hands! I did try playing, I was a goalkeeper for a while but I really didn’t enjoy it. I enjoyed being the person on the pitch who made sure no-one was cheating or breaking the rules. My friends want to be the next Ronaldo or Messi but I want to be the next Andre Marriner, Mark Clattenburg, Michael Oliver or Viktor Kassai.

I finally get to do my basic referee course next summer when I am 13 although I still won’t be allowed to register until I am 14. I can’t wait!

How was your season?

Last season was very frustrating for me. Season 2012/13 I carried on refereeing at my primary school and was doing 2 games every week. I enjoyed it very much and my classmates at school loved having me as their referee as it made it our game. It wasn’t the teachers taking charge, it was one of us. My PE teacher did supervise me and stepped in if I missed something. I left primary school last summer and started at secondary school last September. That meant I was now in the youngest year group at school and so there as no younger year group to referee. My primary school PE teacher did invite me back to my old primary school to referee there but their football club ran from 3.15-4.15 and I don’t finish school until 3.30. By the time I got out of school and my Mum drove me to my old primary school and I got changed I had missed nearly the whole session so if lucky I would just get one short game in, 10 mins per half. They only ran the club for one term as well so I wasn’t getting any game time and was getting very frustrated. I came very close to just giving up on my dream because it felt like I was never going to achieve it. Chris Wild from the UEFA referee department stepped in and started to talk to me about my dreams of being a referee and helped get me back interested again instead of being just frustrated.

The season ended very nice for you with meeting referee Kassai, I read on your blog. How was that? What does Kassai mean for you? 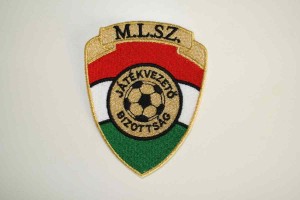 Meeting Viktor was just the best day of my life. He is the best referee in the world and my sporting hero. I watch all his games and study his positioning, how he interacts with players and try and work out the difference between when he gives a foul and when he plays an advantage so I can learn. He is the one whose footsteps I really want to follow in.

He was just brilliant when I met him. He spent nearly the whole afternoon with me, along with his team. They were very good fun and kind caring men. The conversation wasn’t all refereeing, we talked about school, the Hungarian Revolution, the differences between football in the UK and Hungary and about Hungary in general. Gabor Eros is a regional trainer in Hungary, I tried to sneak onto the basic course he ran last December but my Mum has password protected her credit card so I wasn’t able to pay for it and got caught out when her credit card company phoned her about the attempted payment.

She wasn’t very pleased with me. Gabor has invited me to go and do some training with him when we go to Hungary next summer, which I’m really looking forward to. I got some really good advice from all of the team and they really encouraged me to go after my dreams.

How does your RA help you getting better?

At the moment I don’t get any help from my RA. You have to be 14 and qualified before you can register with them but I will join up next year when I turn 14. At the moment I have my own unofficial coach Lucy May, who is a level 3 referee. She is the Referee Development Officer for Northumberland. I’m also lucky to have 5 excellent mentors who are all top flight referees Andre of course is my main mentor, Mark Clattenburg teaches me about application of the LOTG, Michael Oliver is my fitness coach, James Linington is my nutritional coach and Simon Hooper teaches me what the LOTG are and what they mean. I also get help from Roger Vaughan, who is a Football League assessor and Gary Willard who is a Football League referee coach. They set me teaching sessions when they see me and then quiz me on it the next time they see me. Sometimes they make me learn a particular section of the LOTG and sometimes they give me some scenarios to watch and I have to explain whether the referee was right or wrong with the decision and why. I also have Chris Wild and his team at UEFA in Nyon and David Elleray for support. I have also found a lot of support in the wider refereeing community. The majority of the National Group referees talk to me after a game at Bournemouth, discuss decisions with me, explain why some were made or missed! They also encourage me to stick with my dream and not give up. I go to Yeovil & Southampton with my Mum often as a referee guest, which is great because I get to spend more time with the match officials learning from them.

My ultimate aim is to one day be as good as Viktor Kassai and referee on the FIFA list. That is over 20 years away yet though and I have to put in a lot of hard work and learning before that happens.

First off I have to take the learning opportunity I have been given next season, Dorset FA are piloting a new referee club partnership scheme in minisoccer and I have been invited to take part in it. A specified number of clubs will register with the county and will have young qualified referees and any miniwhistlers, like me, allocated to them to referee all of their home games. I will referee U8 & below due to my age.

Each club will also have a senior county referee allocated to them who will act as a mentor and coach to us young referees and tailor our training needs to what we need. I will run the line to the older more experienced referees to give me the chance to learn from them and I will get qualified referees running the line to me in my first games so they are there to help guide me. We will have joint training sessions with the clubs we are allocated to, this will help teach the coaches and players the LOTG and learn about our role as referees.

The clubs have basically agreed to allow young referees and trainee referees to learn their trade in a safe and non-hostile environment. If I make a mistake instead of having to listen to people abusing me, we (the senior referee, the managers/coaches & me) will sit down after the match and discuss the mistake, where I went wrong, what I should have done and how I can get it right the next time. It will be used to help me learn and progress and not create a situation where I lose confidence and perhaps think of giving up because of abuse.

I am currently learning the LOTG relevant to mini-soccer for U8’s and below before the season starts. It will be a chance for me to start to learn the best positioning to maximise my chance of seeing incidents, to understand the LOTG & apply them fairly and honestly to both teams, to have the confidence to make the big calls as I see them at the time, to accept when I have called one wrong, learn from my mistakes, because I know I will make them, to analyse every game and see where I can improve and also to take satisfaction from what I did well. Viktor says it doesn’t matter what level you are refereeing at you must still put in a good performance and make the correct decisions. 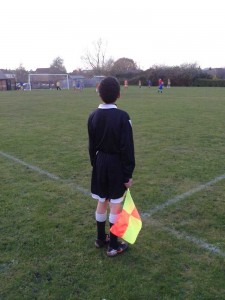 I will do my basic referee course at the start of season 15/16 when I am 13 and then start refereeing in my local youth leagues as soon as I turn 14. My aim then is to learn as much as I can, keep improving, get selected for the referee academy and referee in the youth leagues until I am 16. Once I am 16 I will look to go for an enhanced promotion from Level 7 – Level 5. If I work hard enough and do enough games I can get my level 5 by the time I am 17 or 18, referee in the local leagues and become an assistant referee on the supply league.

them, take their advice and learn to put that into practice. Listen to assessors and take on board what they tell me, they will be trying to help me learn and improve. When I get it wrong or have a bad game as is bound to happen then I have to keep the faith, look at the mistakes I made, work out why I made them and what I can do to not make them again in the future.

I could probably reach my FIFA goal soner if I move to Hungary and work my way up the leagues there as the pyramid is less complex but I’m having a bit of trouble persuading my Mum to move there and let Gabor Eros be my full time coach! Any suggestions on how I can persuade her would be welcome!