Former Fifa referee Ian Stokes prepares young referees for the challenges they will have to face at higher levels. He’s the Lead Tutor for the FAI School of Excellence. “Our aim is to assist these referees to achieve their maximum potential.” 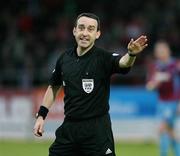 I grew up in Inchicore, Dublin which is close to the stadium of a League of Ireland team (St. Patricks Athletic). As a teenager I followed the fortunes of this team and it was during these years that I became interested in the role of the referee. I took the Referee beginners course in 1992 as a 20 year old and so began my career in refereeing.

I spent the first few years in the Dublin schoolboy league and I was selected for the first FAI Referee School of Excellence in 1998. I was promoted to the League of Ireland panel later that year.

In 2004, I was appointed to the FIFA International panel and thoroughly enjoyed my six years on the panel until my retirement in 2010.

Since 2011 I have been working with the FAI in a voluntary capacity as the Lead Tutor for the FAI School of Excellence.

Unfortunately you had to quit in 2011. Why? And do you miss refereeing?

I had to retire due to a troublesome achilles injury. Despite two operations and lots of various treatments, the medics were not able to resolve the problem. It was a huge disappointment and it took a while to come to terms with it. I finished refereeing at 37 and so potentially had another 8 years on the International panel and 10 years on the domestic panel. I still miss it and feel disappointed at the way things finished so prematurely.

What is your best memory?

I have lots of special memories but if I had to pick one, my best memory would have to be the FAI Cup Final in December 2005. It is an honour to officiate the Cup Final in your country and I feel very privileged to have taken charge of such a special occasion.

You’ve been a Fifa referee with Karl Erik Nilsson (Swe) and Rune Pedersen (Nor) as your mentors. How was the Uefa mentoring programme for you?

This was another highlight of my career working with such experienced and knowledgeable mentors. I really enjoyed working with these guys and they were always very helpful. They analyse your game in detail and give advice on the aspects that will improve your refereeing. As mentors, they were appointed as observers on my International appointments and mini tournaments. They even came to some domestic games in my own league.

You’re in referee development at FAI now. How does your international experience and the mentors you’ve had (also nationally) help you at your current job?

I think it helps me in my role that I have come through the first Irish School of Excellence so I know what it is like to take part as a student. Similarly, some of these young referees aspire to become International Referees and it helps to be able to draw from my experience on the International panel, UEFA Mentor Programme and I have also worked as a Referee Coach at UEFA CORE.

What is the FAI Referee School of Excellence you’re involved in? 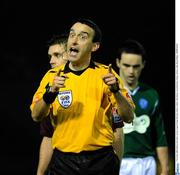 The FAI School of Excellence is a two year modular programme. It meets collectively four times a year. Candidates (from Junior/Intermediate football) are nominated by the local referee observer for the course and have been identified as having the potential to officiate at higher levels of the game.

Following a selection process, successful participants are regularly assessed on knowledge and application of the Laws, fitness and other aspects of refereeing. A lot of emphasis is placed on goal setting and working with the participants at their matches to improve on specific areas of their game. The role of the School is to assist the participants to achieve their maximum potential in refereeing.

What are in your opinion the keys for football organisations to develop their referees?

What can we expect from Irish referees in the future? 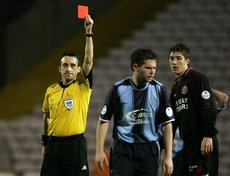 As mentioned previously, my role with the FAI School of Excellence aims to prepare junior/intermediate referees for the challenges that may lie ahead at higher levels of the game. Our aim is to assist these referees to achieve their maximum potential. Some may go on to officiate at League of Ireland and International level and our aim is to provide these officials with a solid base which will assist them to progress through the ranks of UEFA.

If you must give 3 tips to a young talented referee. What advice would you give him?