Assistant referee hit by fan. A news headline you don’t want to read, but sadly you have. Swedish AR Fredrik Klyver was hit by a beer bottle, thrown by a Sturm Graz fan, and was bleeding heavily. Because of this incident the game was abandoned for half an hour, but the game continued. “It is Uefa who decides”, says Swedish referee boss Stefan Johannesson in Sportbladet. “But personally, I do not understand why they make such a decision.”

In this blog post I’ll share some thoughts on why the game still resumes. Plus you get some tips on how to handle yourself, because it’s important to take care of yourself!

NB: The assistant referee has stitches and went to the hospital after the incident. I’ve been told the Fredrik Klyver is doing okay now and he was on his way to Sweden. 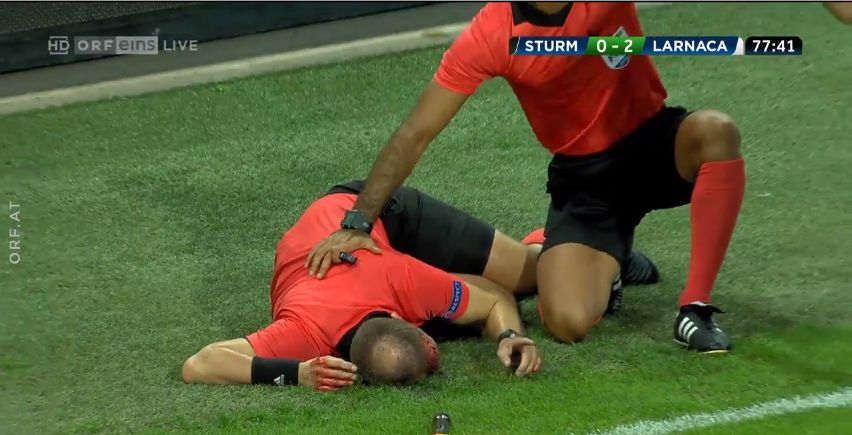 The fourth official has replaced Klyver after a long break. I quite like how blog Law 5 – The Ref has decribed Uefa’s decision to continue. “According to our opinion this was a very weak signal against the violence, almost an unacceptable choice, if we think to all referees who suffer such acts in amateur and minor leagues.” This is in line with acting against awful behaviour by players towards referees.

Uefa can stand up and take action against this. Because referees do need support. Violence has to stop.

The power of the referee

The referee has a say in the fact if the game continues, but it depends on who is the referee. Referee boss Stefan Johannesson explains that more experienced referees have more influence. “Mohammed (the center referee) is quite new to the international stage and then you have less to say about”, he says. “You can compare it with Anders Frisk in Rome.” In September 2004 he got hit by a coin during AS Rom vs Dynamo Kiev. “Then was an elite referee and when he said he did not want to play the match, Uefa listened.”

What you can do as (amateur) referee

“I can say this: if this happened in Sweden we would have abondoned the match”, Johanneson says. My advice to you is to do this as well. Don’t continue. And these tips by Dutch referee association COVS are also important to do:

Of course I hope it doesn’t happen to you, but take good care of yourself when it does.

The video: Referee hit by fan