Preparing referees for a World Cup is a big task. And Nestor Pitana has the honour of refereeing the final between France and Croatia. How does he make sure to be ready? I got the chance to speak with Esfandiar Baharmast, present in Russia as a FIFA referee instructor. “I work with all the referees in their technical preparation as well as mentoring and debriefings”, he says. “Our job is to prepare the referees to the highest standards and make sure that they arrive in top physical and mental conditions.”

In this interview you’ll get to know Esfandiar Baharmast, but will also get an insight in World Cup refereeing. 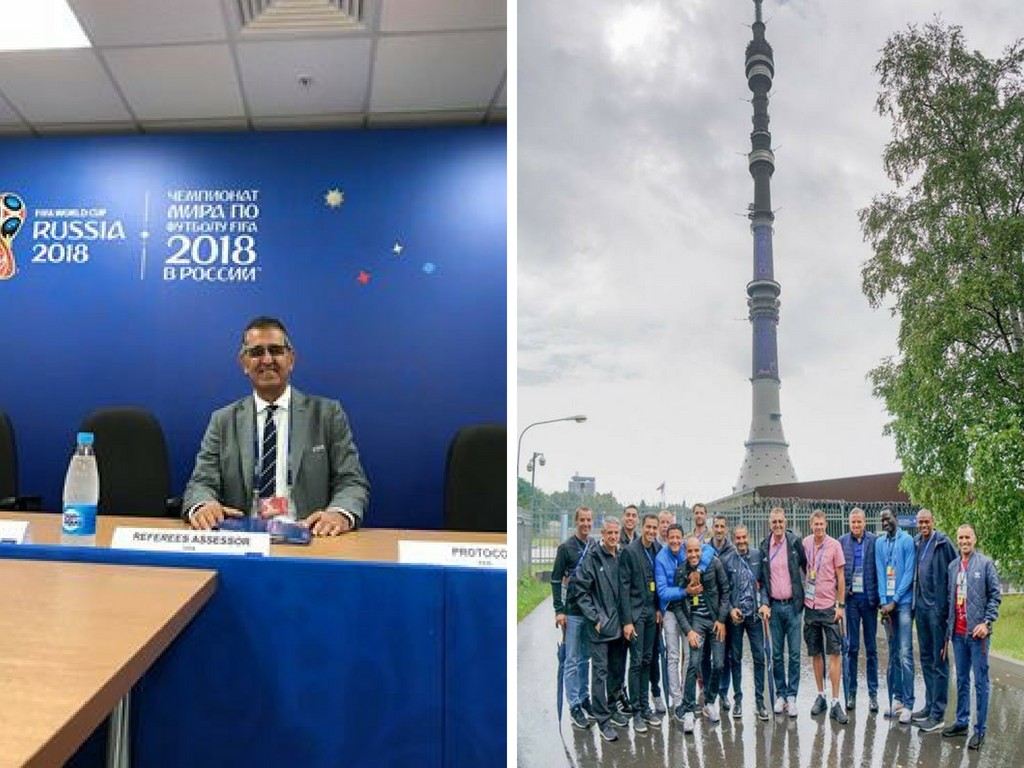 Highlights of his career

What is the biggest highlight of your refereeing career and why?

Esfandiar Baharmast: There are so many highlights that I am not sure which one to mention and keep it brief. From a refereeing point, semi-final of 1996 Olympics in Atlanta between Argentina and Portugal and of course my 1998 World Cup match between Brazil and Norway that to this day is talked about everywhere I go and is an incredible story that does not fade from memories. My assignments to do the opening game of Major League Soccer as well as its 1st Championship match, a game that became an instant classic between DC United and LA Galaxy, both in 1996.

This beautiful career has taken me to 5 Men World Cups, 2 Women World Cups, 4 Olympic games, and every FIFA and Confederation tournaments imaginable. I was the assessor of Rio Olympics final game ( Brazil-Germany) as well as Copa America Centennario championship match (Argentina-Chile).

The awards and accolades that have come are beyond belief, from being the only soccer referee to be the recipient of the NASO ( National Association of Sports Officials) Gold Whistle Award, to receiving the Inaugural MLS Referee of the year award in 1997 and induction to Colorado Soccer Hall of Fame in 1998.

Friendships all over the world

The list goes on and on, but for me the most wonderful highlights are the beautiful friendships that I have with so many quality people in every corner of the globe. They are my true gems and are priceless. I want to highlight each and every one of them, from the mentors who taught me everything I know and my fellow referees, the players and coaches that we still maintain respect and friendship every time we see each other. I also love to celebrate my younger referee friends who through their success and reaching their full potential, bring a smile to my face each and every day.

You’ve had several jobs in refereeing after you quit as active match official. What does it make so beautiful for you to remain involved in refereeing and do you miss it to officiate games yourself?

Esfandiar Baharmast: This game has given me so much and by staying involved and passing on what I have learned is my way of thanking those who came before me as we build on those collective experinces. My best reward is watching the new generation of refeees achieve their dreams and If I can make their journey a little easier and more pleasant, then it is all worthwhile. I owe a huge debt of gratitude to my family and specially my wife Afshan and my daughter Arianna, who know the importance of this and allow me to spend the time away, even though it involves a lot of sacrifice on their part to make it happen.

16 cameras did not see the foul

Let’s go back in time a little bit. You were the center of attention after awarding Norway a penalty kick. Footage afterwards proves that you made a great call, which nobody could see at the moment of the game. I did write a blog post on this topic, but can you briefly explain how you experienced this media storm during such a big tournament?

Esfandiar Baharmast: The media can be brutal and when the tsunami of criticism starts, it takes a great deal of self-confidence and a lot of support from those who are dear and near to your heart to make you stay balanced and in control of your emotions. It is amazing that in the eyes of the media in a span of 36 hours I went from the most incompetent and useless referee (those are some of the mildest words, I give you, as the rest can not be published for people with good manners) to one the best referees who saw something that 16 cameras failed to see. How I was the best and deserved the highest games and all of a sudden had X-ray vision and was super human! 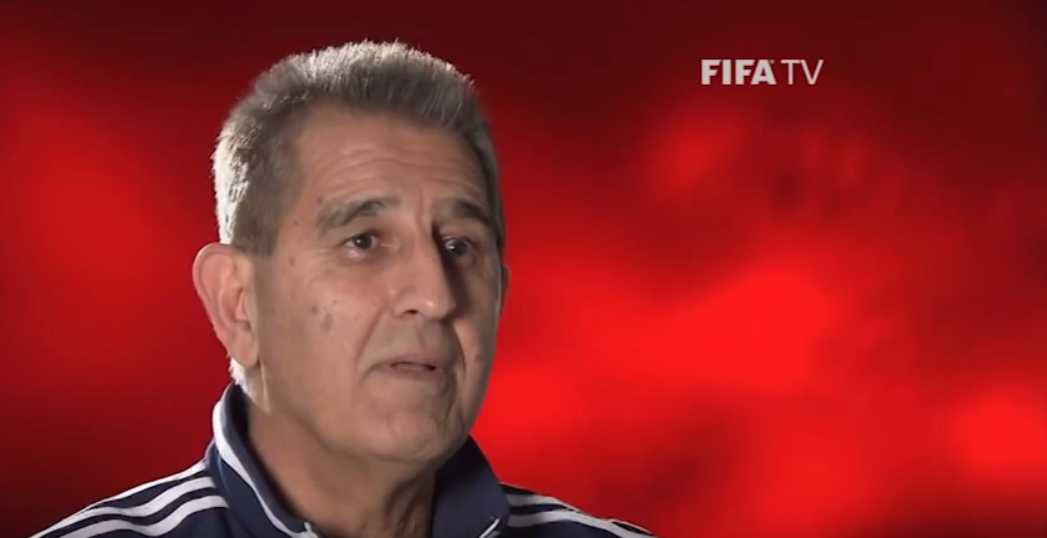 Being comfortable with who I am

The fact of the matter is that nothing had changed, I was the same person with the same judgement and the same decision. Thank God for the Swedish cameraman Mr. Stig Carlsson who had captured the penalty from his location, behind the goal to show the World, what were the simple facts. That Junior Baiano, had CLEARLY pulled the Jersey of Tore Andre Flo and the penalty was 100% the correct decision and I just refereed the game to the best of my ability with honesty and integrity.

Those are the simple facts and allow me to have the most clear conscience and be at peace and very comfortable with who I am and what my values are. For that, I don’t need to read any media or listen to people who have never met me, don’t know my background and have their opinions based on limited information.

How has this changed in recent years now the World Cup is getting even more attention and more people are sharing their opinions on online and social channels?

Esfandiar Baharmast: I think the level of scrutiny and pressure has become so much more, that is almost like trying to drink from a FIRE HOSE. It can be very difficult with all the social media and everything showing up in matter of seconds and shared all over the world, and many times with brutality and lack of civility. This is a shame and It can be seen in every part of our lives, from the kids in school who experience bullying and humiliation through social media, to what happens after a game to referees, and sometimes players and coaches. 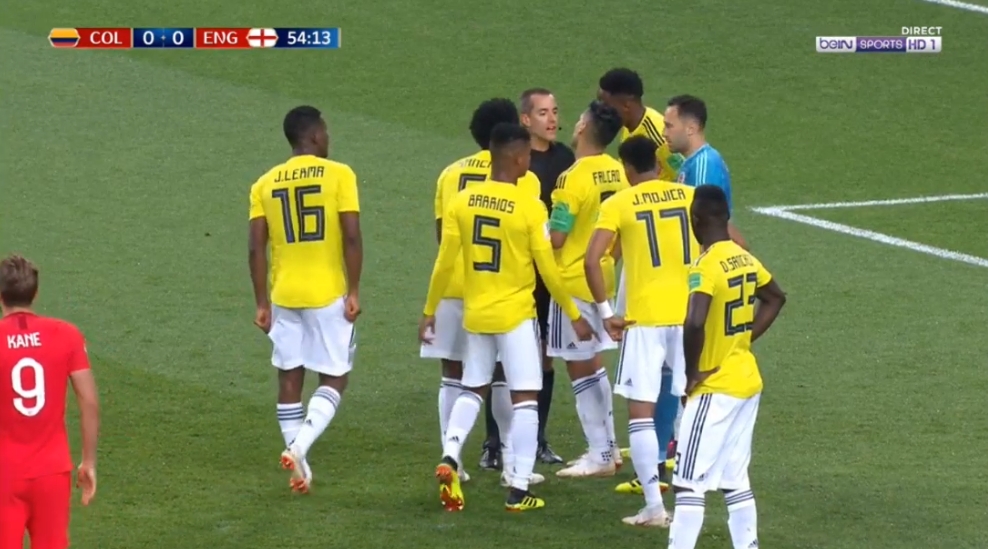 People forget that these are real people, humans with feelings and families to care for. It is not correct to spread so much harsh and negative feelings into this world, as what we spread, is exactly what comes back to us in return. My Motto has always been to “think positive, talk positive and act positive“, very simple words to say, but putting it into action is the real art of living and good humanity.

So my advice to all referees, is that in your life, stay balanced , be humble and always keep your feet to the ground and your eyes to the stars. When you know how to handle success and setbacks and have humility in victory and defeat, then you are at peace with who you are. Do your best, give it all and have faith that good things will come to good people.

You were the referee of the first ever MLS match. The game was played on April 6, 1996 between San Jose Clash & D.C. United. How has football changed and professionalized since then? And what does that mean for the role of the referee?

Esfandiar Baharmast: The Speed of the game is simply mind boggling now in comparison to 22 years ago. The pace of games and how you can have 3 counter attacks from one goal to another in less than 30 seconds are simply amazing. The game is played at incredible pace and referees need to be top athletes and be able to maintain fitness and concentration for over 120 minutes and more, as you can not lose your sharpness and focus in the most important moments of the match, namely when the players are tired and mistakes can occur. The increased number of cameras, more coverage of games in print, TV and social media adds to the amount of scrutiny to everything that we do on and off the field of play. 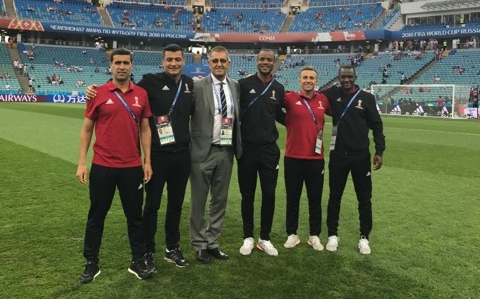 The role of FIFA instructor in Russia

What is your current role for the match officials that will go to the World Cup in Russia?

Esfandiar Baharmast: I am a FIFA instructor and work with all the referees in their technical preparation as well as mentoring and debriefings. Our role is the same as the coaching staff of any team that prepares the players for their games. We conduct practical training on the field of play, as well as preparing video clips from matches to debrief after games and prepare for next matches. In addition I have participated in meeting with teams in the Team Arrival Meetings to make sure players and coaches are informed about the general guidelines given and that we are all on the same page.

The highest standards of refereeing

You’ve been to several events prior to this final tournament with the selected candidates. How do you prepare them for the World Cup?

Esfandiar Baharmast: Our job is to prepare the referees to the highest standards and make sure that they arrive in top physical and mental conditions. Also from a technical standpoint, that they have practiced movement and positioning on the field of play and everything has become natural to them. During the games, they must anticipate and read the game, to move quickly to next phase of play, so that they are always in optimal position and have a great angle of view to see the incidents clearly and judge it according to the consistent interpretations of the laws, which again has been practiced by having gone through countless number of video tests and video discussions in the classroom.

How does FIFA provide the referees with the best preparation possible?

Esfandiar Baharmast: The World Cup referees have gone through a 4 year preparation process. Immediately following the the 2014 World Cup in Brazil, we identified the next group of candidates and they have participated in numerous FIFA tournaments from the Olympic games, to FIFA Youth World Cups (U-20 and U-17) in addition to the FIFA Club World Cups , Confederation tournaments,and countless seminars at every opportunity. Same as players who go through a qualifying process and the best are chosen to play for their National teams, we follow in the same way to select the best possible candidates to arrive at the World Cup. It is a long and very intense selection process to ensure that we get the best referees.

Esfandiar Baharmast: I expect that our referees will be in best fitness form and compete as top athletes, with mental toughness and total technical preparation. They will have be the best prepared referees and we have invested lots of time and resources to make sure that they are successful. They will work to the best of their abilities and as a result we should have a wonderful tournament, where players can showcase their talent and provide an exciting World Cup.

Most of my readers are not yet at their personal top. What tips (top 3) would you give them to manage their (amateur) games well?

Esfandiar Baharmast: My advice woule be:

3 thoughts on “Preparing referees for a World Cup final”