A funny moment in the FA Cup clash between Preston North End and Manchester United. Referee Phil Dowd gave a yellow card to Davies, but he was playing without number. Would you allow that? 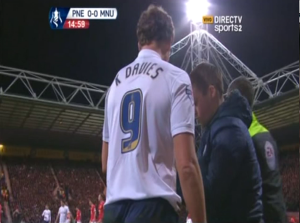 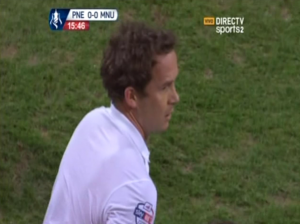 Here’s what happened. The player got blood on his shirt and Preston North End probably does not have more than one outfit per player. That’s why he played with a complete white back of his shirt.

The Laws of the Game say that “The basic compulsory equipment of a player comprises the following separate
items: a jersey or shirt with sleeves – if undergarments are worn, the colour of the sleeve must be the same main colour as the sleeve of the jersey or shirt.” Nothing mentioned about a number on the back of the shirt.

It’s probably in the competition rulebook that a number is necessary.

What would you do if a person is playing without number? On pro level it’s easier to recognize a player, but not on amateur level. How would you deal with it?

Numbers are needed in most games I officate. But I sometimes get a game in Category B (lower levels) and players don’t have numbers on their shirts. When I book someone, I would ask for his name, check that with the given names before the match and write that down in the report. That’s something you can do even when other players do have numbers.

Another solution would be to get some tape and give him a number.