A very interesting situation on the pitch: Jerry St. Juste is playing with lost footwear and scored a goal with one shoe.

The Heerenveen player gets the ball on his own half, but looses one of his shoes right after his first touch. He dribbles towards the opponent’s goal and without being challenged he is able to shoot. And he scores. The referee allows the goal, but is it a correct call?

If the video does not load well, check minute 4:24. That’s when this situation takes place.

The Laws of the Game are very clear (on page 42): “A player whose footwear or shinguard is lost accidentally must replace it as soon as possible and no later than when the ball next goes out of play; if before doing so the player plays the ball and/or scores a goal, the goal is awarded.” 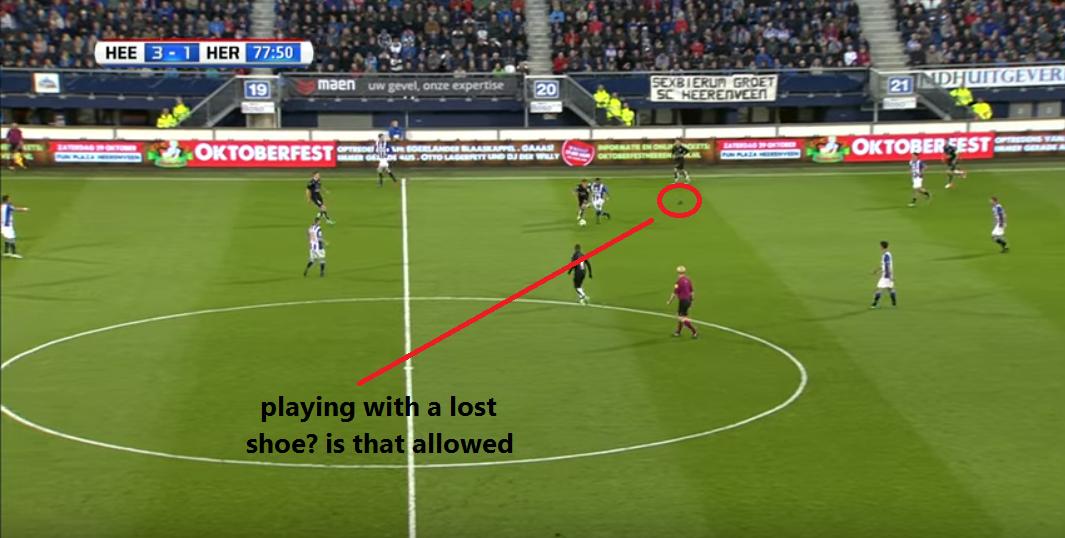 Assistant referee Edwin Zeinstra explains. “It was a beautiful goal, nothing wrong with it”, he says to newspaper Leeuwarder Courant. “Previously he should have passed the ball immediately and was not allowed to continue. Now players allowed to finish their actions [until the ball goes out of play]”, says the member of Team Kuipers.

In the LOTG before the big revision in 2016-2017 the goal would indeed not be counted, because it says that there’s no infringement if a player “immediately plays the ball and/or scores a goal” after loosing his footwear. That’s not the case here, because St. Juste made a long run before his goal with only one shoe at his feet.