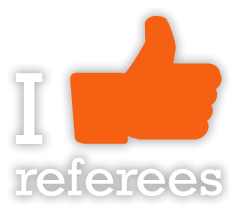 The Belgian FA has started the campaign “I like referees” earlier this season. Uefa referee boss Pierluigi Collina likes referees too.

“I think it’s important to support, help and assist the referees, so any action to promote refereeing is very important. I’m very pleased that the Belgian FA started such initiative.”

Pierluigi Collina also talks about the moment he got the most respect as a referee. “Ofcourse it was the World Cup final. I was invited on stage by Fifa presidant Blatter put a gold medal around my neck and then the crowd in the Yokohama stadium gave a very big applause. It’s something I’ll never forget. Fantastic.”

His last advice: “Support the referee be liking the facebook page.”

Also check out the interview with Howard Webb by the Dutch Referee Blog about his advice to young referees at the start of the campaign.