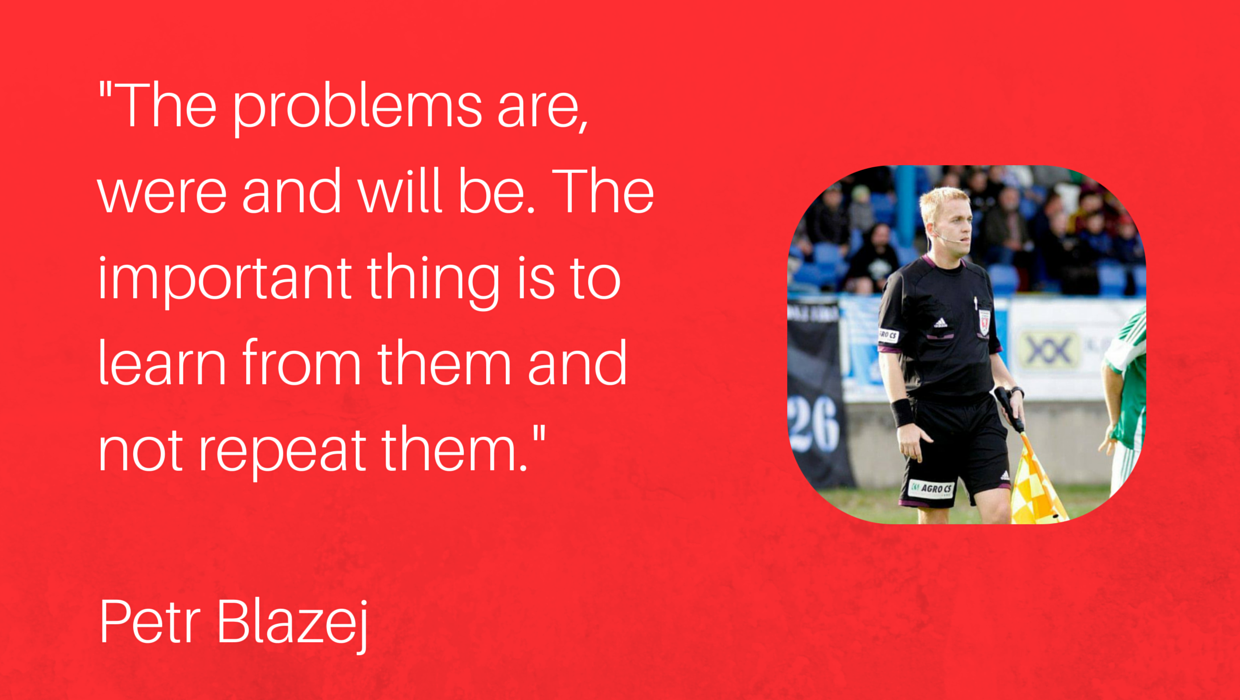 Petr Blažej has a realistic vision on refereeing: “The problems are, were and will be. The important thing is to learn from them and not repeat them.” The Czech assistant referee is appointed for the u19 European Championships 2015 in Greece. Dutch Referee Blog interviewed him.

Peter Blazej: “I feel good and very happy. It’s a great honour to be here.”

When did you leave for Greece and what did you do in preparation before the tournament?

To Greece I arrived four days before the tournament on July 2. Regarding the preparation, the physical preparation will not be some special because three weeks before this tournament I attendeded a UEFA seminar for the assistants referee also in Greece, where I had to made the physical checks.So physically I should be ready. Of course, I try to prepare also in the theoretical way, I want to know the teams, which are in the tournament, what their style of play is, their game tactics and what type of players are in each team.

I expect very good performances of all nine teams. Eight teams of players and one team of referees. Everybody here will do the maximum for a good team performace. It´s my first Uefa tournament, so I am lookong forward to cooperation with the referees and assistant from other countries.

Since childhood, I played football. When I was fifteen, I unfortunately injured my leg. During rehabilitation, I started with refereeing. Then over the time, I changed priorities and the refereeing became to be number one in my sport´s life.

How would you, Peter Blazej, describe yourself as referee?

That is a difficult question. On it should rather answer some of my colleagues. But I can say that I try to always be a good part of the team. Referees win as a team and lose as a team. This motto I try to follow.

Was does it take for you to be an international referee?

Being a referee at this level is sometimes very difficult. You have to have a good home base. Your family must be sometimes very perceptive, because it can often happen that you  will not be a long time at home. Fortunately, my girlfriend and the rest of my family understands this. Also, a job must have a lot of flexibility. Previously, I was a teacher, but to combine that together with refereeing was not possible because of the time. Now I work in family bussiness as a sales manager. I train during the week. My training depends on the job. Sometimes I train in the morning, sometimes in the evening, depending on the workload.

I like the emotion and tension.  Football is a global phenomenon and it’s great on this level to be part of it. Of course sometimes there are moments when things go wrong, but that is the life. After these bad moments there always come better moments. It is always important to learn from your mistakes and not repeat them in the future.

As I said, the problems are, were and will be. The important thing is to learn from them and not repeat them.

You are an international AR since 2014 and running the line in the Czech top league for 4 years now. What are your future goals?

I do not have any big plans for the future. I go step by step and try to take each match at maximum ability.

Check out the interview with Ricardo Fernandes Morais, also an u19 EC assistant referee.

4 thoughts on “Peter Blazej: “Learn from your mistakes””