Referee Ovidiu Hategan and Virgil van Dijk embraced each other after The Netherlands won their Nations League group. If you look a little closer you can see the emotion on the face of the referee. Dutch and Liverpool captain Van Dijk consoles him, as the referee seems upset. “That man broke down, stood with tears in his eyes because I think he had just lost his mother”, he says in an interview with Fox Sports. “I wished him strength and said that he had whistled well. It’s a small thing, but maybe it helps him.” 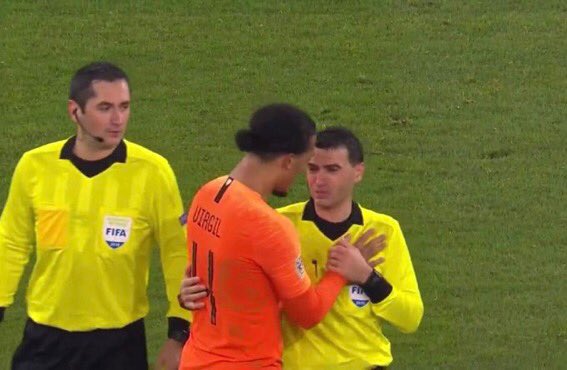 When (not) to referee

This situation got me thinking, because it’s something you rarely see. This is what players can do for you as a referee. Giving that bit of comfort when you need to.

But it also good for referees to realise when (not) to referee. That is a decision every referee has to take for him- or herself. Ovidiu Hategan officated a good game, was focused and fully capable of refereeing that game.

A few weeks ago my grandfather died. I felt sad, but still comfortable to referee a game in the weekend a few days later. It gives me something positive during that week of mourning. If I would have been distracted during work constantly or would have started crying out of the blue while making breakfast or so, then I would not have done the game.

It reminds me of a new paragraph in the KNVB referee handbook. “Football players have the right to have a fit (assistant) referee“, it says. “When you’re injured, we expect you not to referee or assist”.

For me that refers to mental fitness as well. You need to be able to focus on the game, like Hategan. The first point in the story 7 tips to stay focused for 90 minutes is: Avoid negative thoughts and feelings. Focus is what you need, because then you’ll be able to make the right calls. Then you can officate a good game. As KNVB puts it. “You take the risk that you deliver a performance lower than normal.”

Keep that in mind when you make your own call when (not) to officiate.