One of my readers posted the photo below on the Dutch Referee Blogs Facebook timeline. outfit of goalkeeper, good topic. Thanks for the suggestion about.

It shows a goalkeeper appearing in a suit – can’t see his tie – on the goalline. It’s during a gaelic football game. But would you allow him to play during a normal football game? 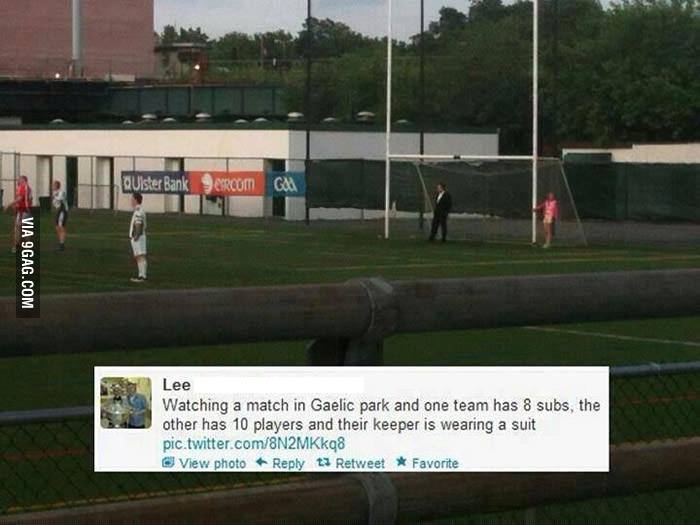 What is the basic equipment of player on a football pitch?

The basic compulsory equipment of a player comprises the following separate
items:

The referee’s suit has a different colour than the player’s outfits, so his colours distinguish him from the other players. Can’t see the referee’s kit.

It’s allowed for goalkeepers to wear tracksuit bottoms as part of their basic equipment. Don’t see any problem with that if he’s wearing a suit’s bottom als a “luxury tracksuit”.

The Laws of the Game also say: “if undergarments are worn, the colour of the sleeve must be the same main colour as the sleeve of the jersey or shirt.”

The shirt under the suit is not the same colour, but what if we don’t see the shirt? Don’t see a problem then. And the LATG don’t mention colour of undergarments around the neck. I’d love to see this guy wearing a suit as a goalie.

5 thoughts on “Outfit of goalkeeper: suit and shirt”