The offside rule is still a difficult one for players, fans and even referees. As an assistant referee it’s sometimes difficult to see if a defender is touching the ball and if it’s a deliberate pass as well. In Saturday’s local clash between Levante and Valencia referee Carlos Velasco Carballo had to make such a difficult call.
After a pass from a Levante defender Ángel was in offside position, but he’s walking back and doesn’t interfere with play immediately. Check out the video (from about 2 minutes) first and then read the case study below.

As you can see in the video: referee Velasco Carballo initially raises his hand to give an indirect free kick after an offside signal by his assistant referee. But then something triggers him to go to his assistant referee and discuss the whole situation. Yes, the assistant referee was correct that the player was in offside position when the ball was played. But how did play continue? Below you’ll see a good case study of the offside rule changes as introduces during the 2013/2014 season. 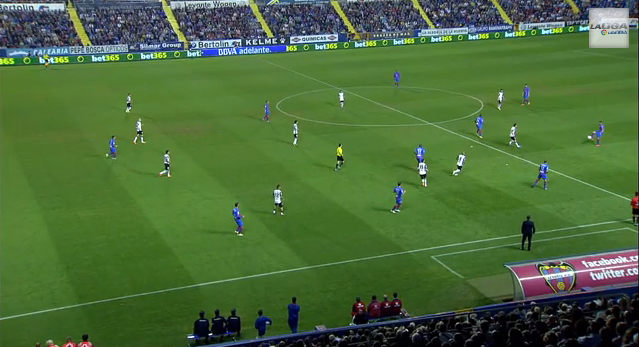 Offside rule: Levante attacker Ángel is in offside position at the moment the ball is passed.

The long ball is reaching a Valencia defender who sees the ball coming. He waits for it and tries to pass the ball forward with his head. The picture below shows that the attacker who was in offside position is not interfering with play at this moment. The Laws of the Game say that “interfering with play” means

The Levante attacker is completely out of the picture below, which means that he’s definately not challenging the defender. The ball came through the air, so he’s also not blocking the defender’s view. 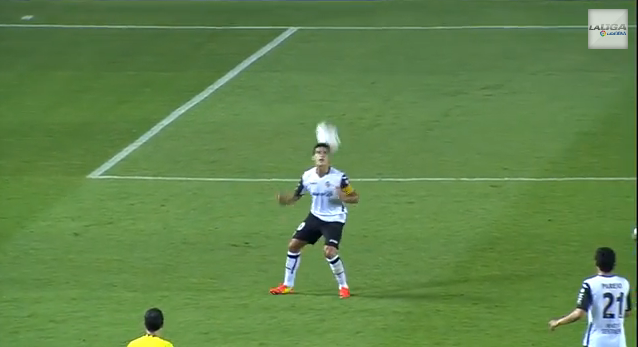 Offside rule: deliberate pass or not?

But the header from the defender fails completely, the ball moves backwards towards his own goalie. In just a few seconds the Levante attacker, who was in offside position, reacts and reaches the ball very fast, runs to the goal and scores. There was some chaos with protesting players, the referee and his assistant discussing the situation. Because the question now is: was Levante attacker Ángel gaining advantage of his offside position?

And the blog is right about that. The Laws of the Game says the following: “A player in an offside position receiving the ball from an opponent, who deliberately plays the ball (except from a deliberate save), is not considered to have gained an advantage.”

UPDATE: Look at the comment of Niclas below. Did you hear the whistle? I did not until listing a few more times. So the above is true if the referee did not whistle. But if a referee whistles and then changes his decision, restart should be a drop ball.