Mika Lamppu from Finland gets appointed for the u17 European Championship in 2017, but has never worked with the center referee before. He shares his experiences of the tournament and how important it is to build a relation with referees outside the games while abroad for a tournament. “Without chemistry the team can’t work to it’s full potential.”

Mika, congratulations with your appointment for the u17 European Championship earlier this year. How did you experience the tournament?
Mika Lamppu: “The tournament was a great experience. It seems to be true that final tournaments have their own atmosphere. It’s a big stage for the players and the teams are playing for the trophy. Especially, in the beginning you could see players being nervous, but the same time giving the best they got – all the time.” 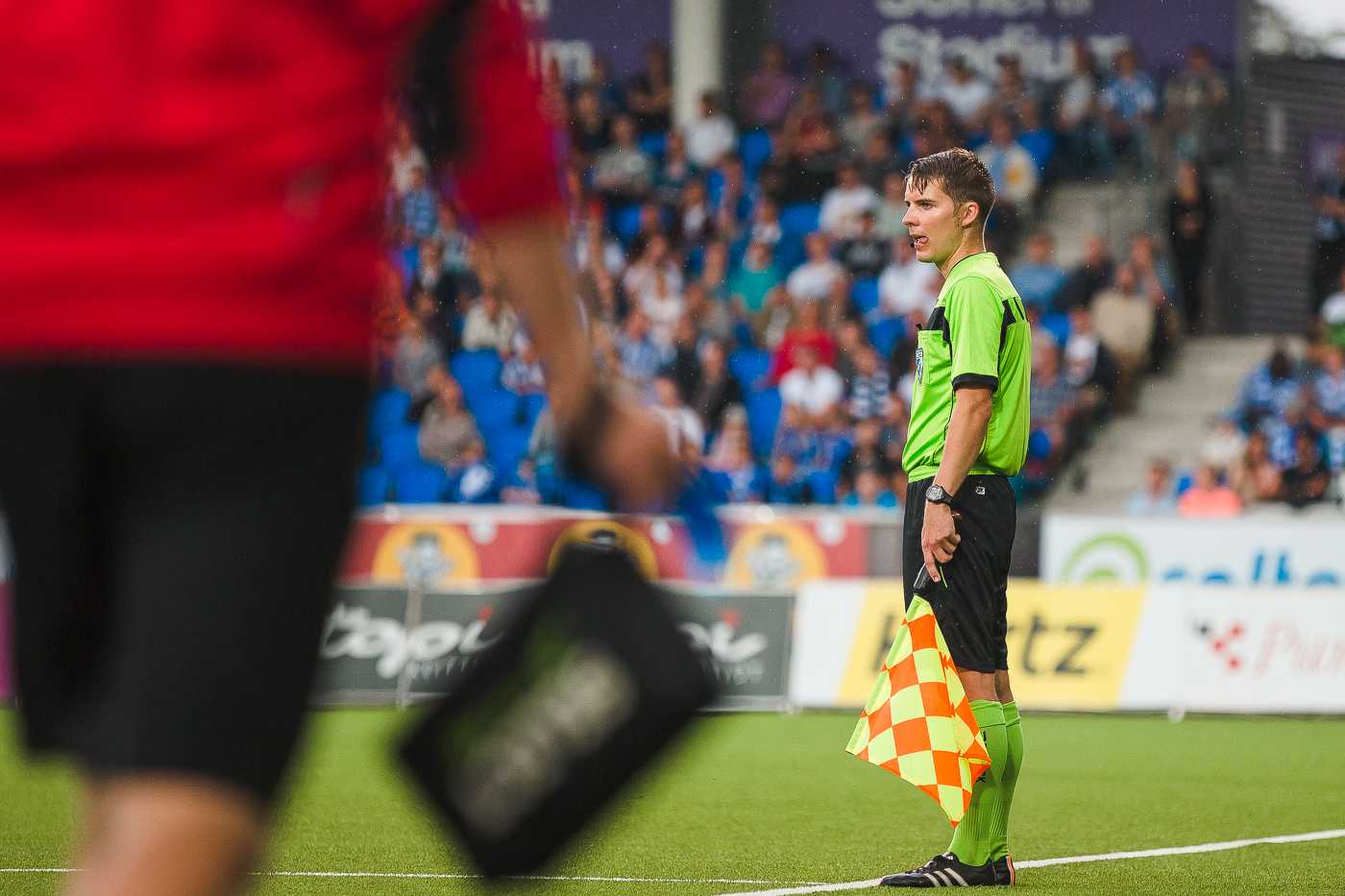 “I think it was the same for us, the referees, even though we were all much older than the players. It took the first match to get over the nervousness. After that you get used to everything going around you and you can prepare for the upcoming days and matches with ease. Like for the players, every match was important to us.”

A few Finnish colleagues went to this tournament as well. 2007 assistant-referee Jan-Peter Aravirta, 2009 assistant-referee Jonas Turunen, 2010 referee Antti Munukka, 2012 referee Mattias Gestranius, 2015 assistant referee Ville Koskiniemi and 2016 referee Ville Nevalainen. Did you talk with them about the preparation for such a final stage tournament?
Mika Lamppu: “I exchanged some words with all of them before and during the tournament. The best tips came from the duo of the veteran assistant referees, Mr Turunen and Aravirta, who told me to be myself. No magic tricks were needed – I only had to do the same performance that I’ve done so many times in Finland. I found it very important to have the opportunity to keep in touch with the guys during the three weeks and share my feelings to them. It helped me a lot.”

You got appointed for the final of the tournament between Spain and England. What does a day of a tournament final look like for referees?
Mika Lamppu: “In the end, the day of the tournament final doesn’t differ much from the normal matches. You do the physical training a day before, you have your pre-match discussion and a lunch with your team on the match day. Of course you need to concentrate on the match. Still, the day before the kick-off is quite long, so you want to have a short stroll outside or do something that gives you something else to think about. It keeps you fresh and the extra tension – that comes from the upcoming match – stays at bay. The biggest difference between other matches is the hype going around the stadium.”

Learning from other referees

In the final you worked with Jens Maae (Denmark) and Aleksey Vorontsov (Russia), but you were not a trio the whole time during the tournament. How is it to cooperate with officials from different countries?
Mika Lamppu: “The fact that every referee came from a different country brought us challenges during the tournament. The communication between the referee team members during the match has to be simple. We also need to discuss it thoroughly in the pre-match briefing. Also, refereeing is a bit different in every country which made us to give attention even to little details.

“But in the end, without chemistry the team can’t work with their full potential. As a assistant, you need to be aware what kind of persons the others are and what they think about football. During the tournament you needed to build the chemistry also outside the field of play and the formal daily schedule. For example, the final was my first match with mr. Maae, but we managed to build a good cooperation thanks to spending much time together during the weeks.”

Games with refs you don’t know

Refereeing with people from different countries probably gives you nice insights in their way of preparing and officiating. What are the best things you learned from them?
Mika Lamppu: “Getting prepared for the matches with unknown referees reminded me how crucial it is to an assistant referee to be on the field of play for the referee and manage the match the way he wants. There’s no place for going solo for the assistant referee. Of course you need to concentrate on your own performance too, but the aim is to succeed as a team, and the first step towards that aim is to help the referee to have a great match. This reminder was the best thing every referee thought me in the tournament.

“I tried to learn from the little things the referees did before the matches. I tried to study the nuances of the Cypriot and Greek music in the locker room. It was also interesting to see how many cups of tea the Welsh need before the match during the day. The number seems to vary between 9 and 13.”

Back to the start of your career. How did you start as referee?
Mika Lamppu: “I started refereeing in 2001 when I was thirteen years old. My dad – who was a 2nd division referee when he retired – got me into refereeing. I had already been playing football for years so it was quite natural to start this hobby. Back then I lived in a small town where referees were needed, so I got lots of matches under my belt every year. That way I got also pocket money. I guess that’s a common reason why young girls and boys start refereeing.”

What do you like about refereeing so much and have you ever thought of quitting this hobby?
Mika Lamppu: “Actually I’ve never even thought about quitting this hobby. After I had decided to stop playing football and concentrate on refereeing (I was 20 back then), I’ve been fully committed to being a better referee and make a career out of it. I just love to be part of the sport and the matches.”

What’s the hardest challenge/problem during your career?
Mika Lamppu: “I don’t know if it’s the hardest, but it’s sure one I remember. In my very early career as an assistant referee I tried also to develop as a referee. It took me a one full year to realize that my personality fits much better to be an assistant than a referee. It was hard to accept at first, but realizing that has definitely made me a better assistant referee.”

You were a match official in the game between Víkungur and FH Hafnarfjörður in the Champions League qualifiers in the 2017 summer. How was your debut in that tournament?
Mika Lamppu: “I took the match as an any other match I’ve had since I got my FIFA badge. I found the atmosphere in the stadium nice, though. It was obvious, that the match was important for the people who live on that island. Also, the visiting team coming from Iceland gave a twist for the match.”

What do you expect for the rest of this season?
Mika Lamppu: “I know I’m still very young as an assistant referee. I don’t want to try to take too big steps at a time. I really don’t have a hurry getting to bigger matches. My expectations for the rest of the season are to improve as an assistant referee and keep building a trustworthy relationship with my referees. The thing is to be patient.”

What are the best 3 tips you ever got that made you a better referee?
Mika Lamppu: “Be courageous, be confident and stay calm.”

2 thoughts on “Mika Lamppu: learning a lot from other refs during u17 tournament”