Michelle O’Neill will be involved in the 2019 Women’s World Cup final. She’s the assistant referee of Stéphanie Frappart. They first worked together at O’Neil’s first main Uefa tournament, the u19 Euro’s. “Where I was very succesfull and got all the way the final.”

Seven years later they will add another pinnacle to their cooperation with the World Cup final in France.  A story about Michelle O’Neil, a top level assistant referee from Ireland. 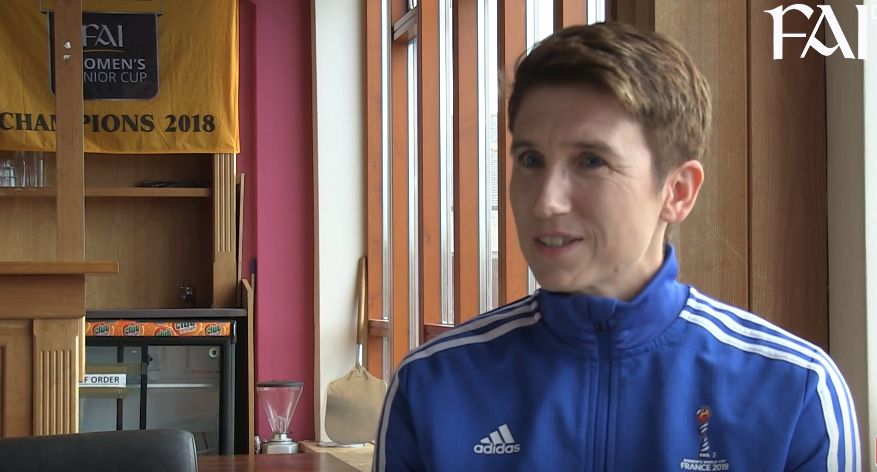 In a video from FAI Ireland (embedded below) she tells a lot about her career as referee. A few lessons for you.

The woman from Ireland is very passionate about her job as referee. She smiles when talking about it, excitement everywhere when being asked about going to France for the World Cup.

It’s just over ten years ago that she started as a referee in 2008. After her succesfull u19 Uefa Euro’s in 2012, she has been to Papua New Guinea for the under 20’s World Cup, 2015 Women’s World Cup in France, Uefa Euro 2017 in The Netherlands, the u20 France World Cup last year. In the latter she again worked with Stéphanie Frappart from France and  “got all the way to the final again”.

She calls her career “unbelievable”.

Always try to get better

As a player Michelle O’Neill was succesfull, but she was not always with the referee decisions. “I always was frustrated about, you know, the decisions in the matches”, she says to FAI. She always thought: “Hey guys, you can do better here.” That’s why she went into refereeing herself after finishing her career.

And getting better and better is something you’ll see throughout her career. She wants to be the best. “Four years ago there was 300 of us on the list for this tournament and that’s when the campaign started”, she says. “Now there is 47 of us going to the World Cup out of that huge amount.”

That means for her that she wants to give all to be “very fast, very strong, very fit”.

She made the final cut and is proud to be representing Ireland. “And in terms of my results I would be in the top 5% of the World Cup this year. So I am very very happy with that stats.”

Work hard for good games at national level too

Michelle O’Neill wants to officiate as many good games as possible. Not just in Europe, but also at national level.  She is an assistant referee in the highest men’s league since 2013.  What helped her getting ready for the 2019 Women’s World Cup is “getting the opportunities to have so much high quality matches here in Ireland”, she says. “That is a huge boost for me.”

In 2017 Esther Staubli officiated a game at FIFA’s u17 tournament in India, but did you know Michelle O’Neill was involved in the u19 men’s Youth League in 2014-2015? She assisted referee Robert Rogers in the game between Arsenal and Borussia Dortmund.

Gain experience as much as you can

“I’ts so exciting to come back to a World Cup”, Michelle O’Neill says. Because she has been at a World Cup before, she felt much better before the tournament.  Call it “more mature if you want to say that”. And the experience she gained helps her a lot. Less stress. “I am a lot more relaxed, as I know the work I’ve done over the last four years.

For her it’s a huge honour to be present in France. To FAI she tells that it’s amazing to be “standing in the middle of it all officiating it in front of 64.000 live spectators and then millions across the world. I mean it’s a huge, huge stage of Women’s football.”