I blogged about Irmatov who whistled for a foul and then still allows the goal which was scored afterwards. There’s a same situation back in the nineties in Germany: it costed referee Michael Malbranc his career. 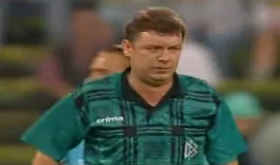 We need to go back to the 5th of August 1997. Referee Michael Malbranc was refereeing 1860 München versus Karlsruher SC in German Bundesliga in the Olympia Stadium in Munich. The score was 2-1 for “Die Löwen” (The Lions) the nickname of the club from Munich. It was the 88th minute when Abédi Pelé from the home team made an offence and referee Michael Malbranc whistled. The KSC attacker still kept going for the goal maybe less than a second after the whistle. The referee awarded the goal and the match ended in 2-2.

The referee never admitted his mistake. He said afterwards that “in his perception the whistle was after the goal was scored”, according to news website NDR. They also say Michael Malbranc was not allowed to referee matches on the two highest levels anymore. Only four months after Malbranc he resigned as a referee.

Check out the video about the incident. It’s in German, but you can hear when the referee whistled and where the ball was at that moment. If it’s not loading properly, you should start at 14 min and 30 seconds.

What can referees learn from this? Check out the case study about changing a decision as referee.

3 thoughts on “Michael Malbranc: a mistake that costed him his referee career”