“I love the feeling of waking up on a Saturday morning, looking forward to the games I shall be involved in at the weekend. It is a privilege to be involved in football as a referee, primarily because it’s the closest you can get to the game as a neutral and appreciate the spectacle of great passes, great saves and of course great goals!”

When and why did you become a referee?
Matt Leary: “I became a referee in the summer of 2007, after being a club assistant referee to a local ladies team for six months, which also included some rather unpleasant “additional” duties (see picture). 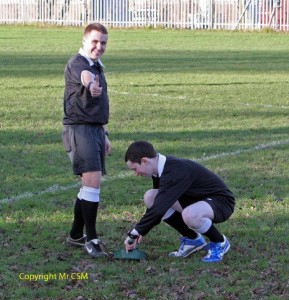 I was encouraged to “take up the whistle” by a local referee, when he saw that I was fairly good as a club assistant referee and thought I would make a good referee.

You often referee twice per weekend. How do you remain fit for that 2nd game? What if you need to give everything on Saturday and got sore legs on Sunday?
Matt Leary: “I sometimes referee three times per weekend, once on Saturday and twice on Sunday – very tiring physically and mentally!”

“The important bit for me is the recovery time on Saturday night. I make sure that I take care of myself to ensure I’m match-fit the following morning – stretching off a little bit on Saturday night, using compression wear to make sure my calves are fully recovered for Sunday morning as they often take a pounding across a busy weekend. I make sure I get a decent amount of sleep so that I’m mentally and physically recovered for the following day. Going out and partying hard the night before any game is a big no-no for me, as I’ve often seen colleagues turning up for Sunday morning games rather the worse for wear from a late night out and it doesn’t go down well with the teams.”

What’s the best thing you learned during the current season?
Matt Leary: “I had an incident during one of my matches this season, when an attacking player was fouled inside the opposition penalty area. Instead of awarding a penalty kick, I applied the advantage rule as I spotted another attacker in possession and thought he would score. The attacker fired his effort wide of the goal and there were instantly appeals for a penalty kick from his colleagues, which I turned down and instead awarded a goal kick.”

“The match assessor said afterwards that I would have been better off to award a penalty kick, as it causes less aggravation, and in the context of that match it would have meant an opportunity for the attacking team to equalise, as they were 2-1 down.
The lesson learnt was simple: if an attacking player is fouled inside the opposing penalty area, award the penalty kick and don’t apply the advantage – it causes less issues.”

We’re almost halfway the season. How was it so far and what do you expect from the second half of the 2014/2015 season?
Matt Leary: “It’s certainly been a busy season. Since August I have officiated nearly 30 games. I’ve had some games which I’ve enjoyed, some I haven’t, some games where I’ve had to issue a lot of cards and others where the cards have stayed in the pocket. I still require one more assessment before the end of February to determine whether I receive my promotion to level 5 and onto the Senior County Referees List. I’m confident I can put in a performance of the standard required that will result in my promotion, and I’m hopeful that I can put in consistent performances to be considered for the local cup final referee list.”

Read further below the photo. 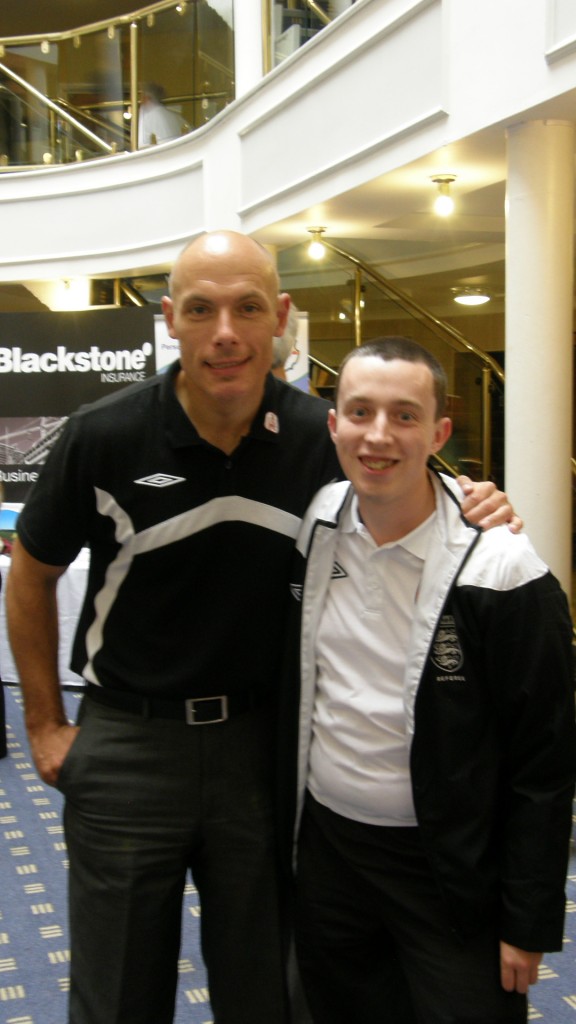 How does your RA help you getting better?
Matt Leary: “A lot of training is offered by both the Aldershot RA and the Hampshire County RA, both practical and theory. We have monthly sessions at Aldershot where we are joined by a guest from the refereeing community.”

“Last month we were joined by Ray Olivier, Training and Development Manager for the PGMOL, where we had an interactive session on recognising foul challenges, which provided much humour and debate on a subject which is critical to us as referees – if we don’t recognise foul challenges and punish them correctly (free kick, caution/dismissal) then we risk losing match control, further possible misconduct with players taking the law into their own hands and also accusations of not protecting player safety.”

You express a keen interest in the women’s game. Why is this important to you?
Matt Leary: “As previously mentioned, I began my refereeing adventure as a club assistant referee for a local women’s team in 2007, and coincidentally my first-ever adult game was in 2008, refereeing one of their league games when the appointed referee did not show.”

“I really enjoy officiating women’s football, as I feel it offers a different challenge to men’s football. Because the majority of the women’s games are good-mannered occasions, I can focus more on getting the technical aspects correct, such as positioning and work rate, although I still remain alert to the potential for misconduct that will potentially test my match control.”

“I am fortunate enough to have one of the FA’s Female Refereeing Ambassadors – known as the Pink Whistlers – as my mentor. She has provided a lot of support to me over the last three years and I remain ever-grateful to her for the wisdom and support offered throughout my refereeing career. I nearly quit refereeing in 2012 after a frightening incident at a game, and it was a phone call from her that night which encouraged me not to give up and to carry on refereeing. Six months later I was promoted to my current level as well as picking up two cup final appointments!”

What are your goals in refereeing?
Matt Leary: “When I first began in 2007, I wanted to referee on the Premier League. I no longer think this is a possibility for health reasons, so I now set myself realistic targets during pre-season each year – for this season it’s to get myself promoted to level 5, possibly get appointed to a cup final but also – and most importantly – to continue to enjoy my refereeing.”

“My dream would be to referee on a local league Cup Final, and to be awarded the FA’s Three Lions badge (awarded to referees for officiating in an FA Competition final or representing the FA on FIFA-sanctioned international competitions).”