The Laws of the Game 2017-2018 are now available. IFAB previously has published the changes for next season, but now there's also a document with the new LOTG available. Read them now and be prepared for the next season. 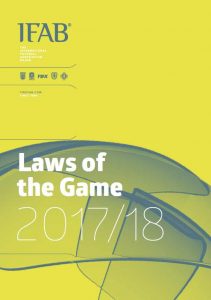 IFAB says the 2016-2017 revision of the Laws of the Game was "probably the most far-reaching and comprehensive in The IFAB’s history".  The aim was to make
the Laws clearer, more accessible and to ensure they reflect the needs of
the modern game.

The Laws of the Game 2017-2018 contain the follow up of the big revision of last year. Most of them are already shown in the clarifications given in November.

From IFAB: "In addition to the clarifications, there are some changes which are extensions of principles established in the 2016/17 revision, for example:

Herewith a simple outline of the main changes /clarifications. 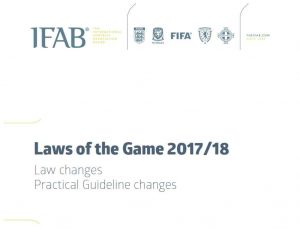 LAW 7 – THE DURATION OF THE MATCH

LAW 8 – THE START AND RESTART OF PLAY

LAW 10 – DETERMINING THE OUTCOME OF A MATCH

Kicks from the penalty mark (KFPM)

The following are the changes to the Laws of the Game for 2017/18. For each change the old wording (where appropriate) and the new/changed/additional wording are given, followed by an explanation for the change. The text shown in the ‘old text’ boxes may be the exact previous text or a more general outline of the meaning of the previous text.

Download the document with the details of all changes for 2017-2018.