Kepa vs Sarri: case study when a player refuses to leave. I always thought this situation was reserved for my weekly Laws of the Game Quizzes, but it really happened in the Carabao Cup.

How do you deal with this situation as a refreee?

When a player refuses to leave

A unique story in pics and a video, explained by the Laws of the Game. Because Kepa, the Chelsea goalkeeper, was injured, his coach wants to replace him. 4th official Paul Tierney puts the board in the air with number one, but Kepa remains on the field of play.

Referee Jon Moss takes a good approach, because he goes to the player quickly. Also team-mate David Luiz joins him, but Kepa is not going out.  Then it felt like comedy capers … 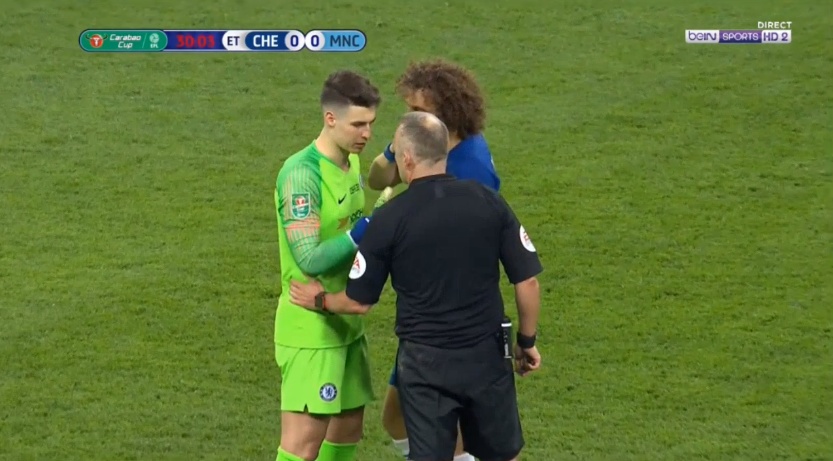 Chelsea manager Sarri is mad. He wants his goal keeper to come off, but what is actually in the LOTG? “If a player who is to be replaced refuses to leave, play continues.”

Jon Moss talks with the manager, his assistant and the 4th official and he explains the situation. 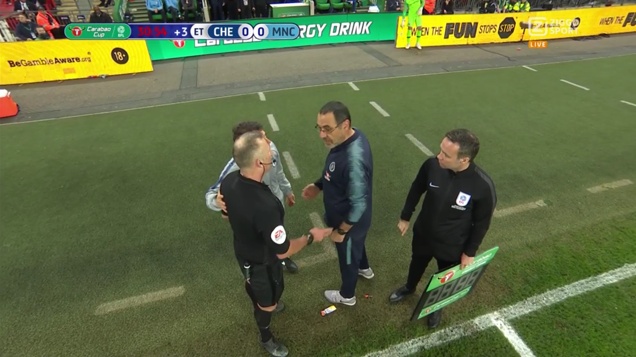 As a referee, you have no right to force a substitution here. All you can do is continue the game.

Sarri gets mad, and seems to walk away from the field of play. He comes back, but is not happy at all.

In the meantime Willy Cabbalero is waiting, like his nose his bleeding.

The person behind Paul Tierney even brings a second substitution board, as it might be needed for additional time.

But what if Jon Moss blows the final whistle? Would you allow the substitution to take place? 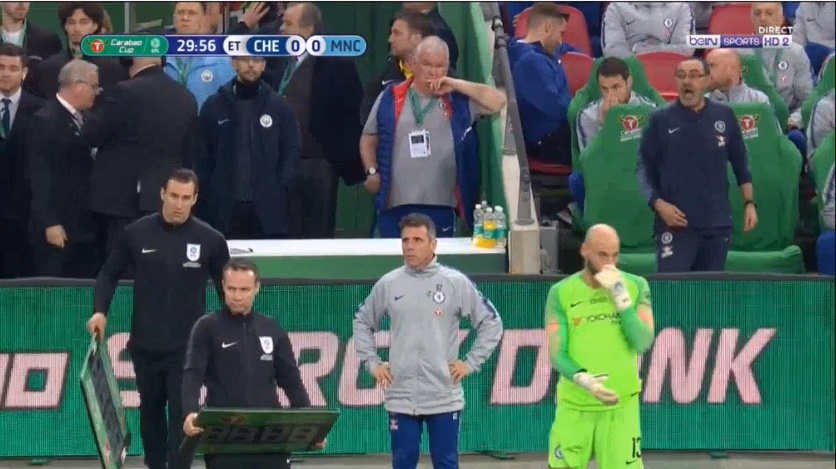 Substitution after the final whistle

What was your answer to the question above the picture?

This is what the Laws of the Game say. “A player other than the goalkeeper who is unable to continue may not be replaced.”

Although Kepa thinks he is not injured, I’d allow the substitution after the final whistle. That is also what Sarri and his assistant manager checked with the 4th official. But in this case Chelsea did not use this option.

Video of the situation

2 thoughts on “Kepa vs Sarri: when a player refuses to leave”