Jon Moss has a few tips for you as referee. What goes on in the head of a referee before an important game? Jon Moss tells about what it means to referee the FA Cup final: “It’s the realisation of a dream. It’s the culmination of years of hard work”. During his refereeing career Jon Moss has experienced a lot and he shares his story with us during an interview with Refereeing, the FA’s magazine. I picked 5 lessons from that interview that you can learn a lot from as referee. 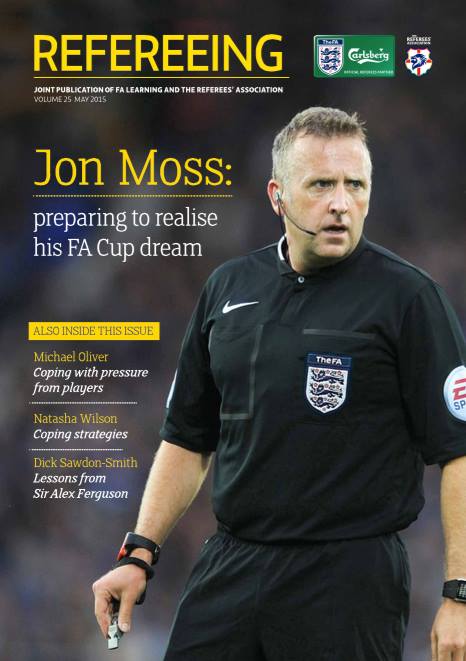 Going back to the old days when Moss started: “I remember shepherding sheep off the pitch at Pateley Bridge before the match. I think it was the only time I had to stop a game because of a sheep too. You don’t get that in the Premier League”, he told the Harrogate Advertiser.

In Refereeing he admits he still officiates junior games on Sunday’s after he had a match. “I think it is important for younger referees to see more experienced colleagues doing a junior game.” It’s good to see what skills they use to manage a game you always referee as well. Pick up techniques of man management, see how they communicate with players and use that in your own games.

Question to ask yourself: What do you have difficulties with? What do you want to learn from more experienced refs?

This advice is actually one of Jon Moss’ father. “It’s important in refereeing and in life in general”, says Moss. “Always treat people like you want to be treated yourself. It sounds simple but how you conduct yourself with secretraries, with players, with managers is important.”

Questions to ask yourself: How do you step into the board room at a football club? How do you talk with players and staff?

Hard work can lead to refereeing a FA Cup final. Jon Moss reminds the early beeps of the alarm clock at 6 in the morning. He thought of pushing the snooze button and continue to sleep. “But I haven’t. I have got up, I have gone for a run. I have gone and done another talk.”

Questions to ask yourself: How often do you skip training sessions? Why?

4. Go to all RA meetings

This week I blogged about referee development in Northern Ireland. They organize meetings to make referees better.

RA’s want to help you and can actually make you grow.

Jon Moss tried to attend all of them. He wanted to learn. “When I started taking refereeing seriously  I was going to all the meetings.” It helped him a lot. As beginning referee you might not be so sure about how to handle things on the pitch and at RA meetings are “more experienced referees who guid you through”.

Question to ask yourself: What do you want to learn from other refs? And if your RA does not have meetings yet, be pro-active and ask people the things you need to know.

5. Remember who helped you

Have you earned your promotion this year? Have you improved as referee due to tips you got from others? Jon Moss will thank all the people who helped him reach the FA Cup final. “Ill be phoning them all and thanking them personally because it is important that you share the success with those people that have made you.”

Please share the best things you learned at your referee association with us in the comments, so other referees could benefit from it as well. They will thank you!

What is the craziest thing that happened in your game?