When referee Jeroen Manschot goes to his games there’s always one fan for him on the stands. His dad. Even if his son is fourth official. His father is not a KNVB referee, but has followed the referee course. “Based on my dad’s demeanour in the car back home I can see if it was a good game or not”, says the Dutch top level (Eredivisie) referee in an interview with Dutch Referee Blog. 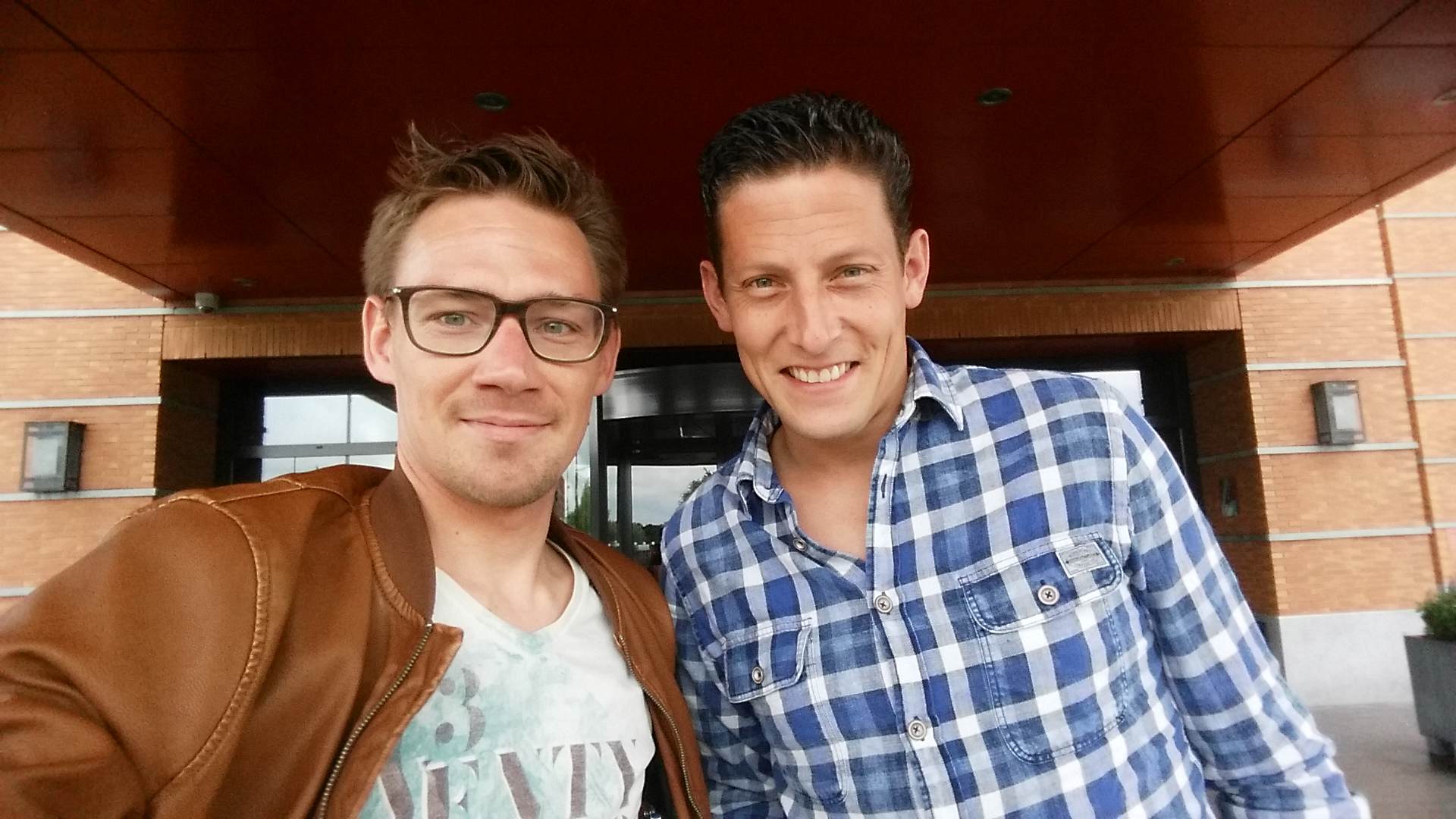 Jeroen Manschot (right) and me

“Talking to my dad on the way back in the car is my first reflection moment, purely based on what he has seen.” Manschot is happy with a critical spectator on the sidelines. “Constructive criticism is useful. You don’t need someone to humiliate you. The person has to care for you, he or she should only wish the best for you.”

The Eredivisie referee played in the youth teams of SV Houten. “I was required to referee every now and then”, he says. “I was sitting more on the bench than I was playing. The pleasure I had was gone.” The choice of being only a referee was easy. In 2000 he starts as referee for the KNVB, the Dutch football association.

“At the start of my career whistling was very good for my personal development, the mental toughness”, he says. “You need to show how far players can go, don’t stand out and go off the pitch with 22 players again”. Nowadays he has what he calls a “VIP spot” on the field with the best view of Dutch top football.

In 2014 Manschot makes his Eredivisie debut. “The first season went well. Lots of moments happened where I was able to learn from”, he says. “I did not officiate the top clubs immediately, but every game was under pressure. That’s when you learn to communicate with players even better.” About his 2015-2016 season he is even more satisfied. “I got quite a lot games for a so-called Junior referee. My goal was to earn a promotion, but unfortunately there was no spot available in the Senior group. That’s a bit of pity.”

Every year Manschot wants to improve himself. “I am my own critic”, assures the referee from Houten. “Am I wrong, then it’s even quicker on my phone than I know about the mistake myself. Of course I will award a throw-in or corner kick to the wrong team, but it’s about the key incidents. If they are judged wrong, it’s something that bothers me. It’s frustrating and I want to know how it happened.”

That is why Manschot wants to no at half-time if he has made an error in the first half. “Everybody sees it, so I want to see a replay as well”, he says. “And then you have to forget about it and don’t make the mistake of giving a “present” in favour of the other team in the second half. Then you’ll make two mistakes.”

The referee tells me about a game between Groningen and ADO. He gives a penalty kick for a handball. “Everyone thinks immediately about a handball, me too, so I whistle.” The ball did not touch the hand. “I only should whistle when I’ve seen it 100% for sure. Really perceived it. That’s a good learning point. And if I make that mistake, I feel bad. It doesn’t mean I’ll sleep bad for a week, but one night for sure. 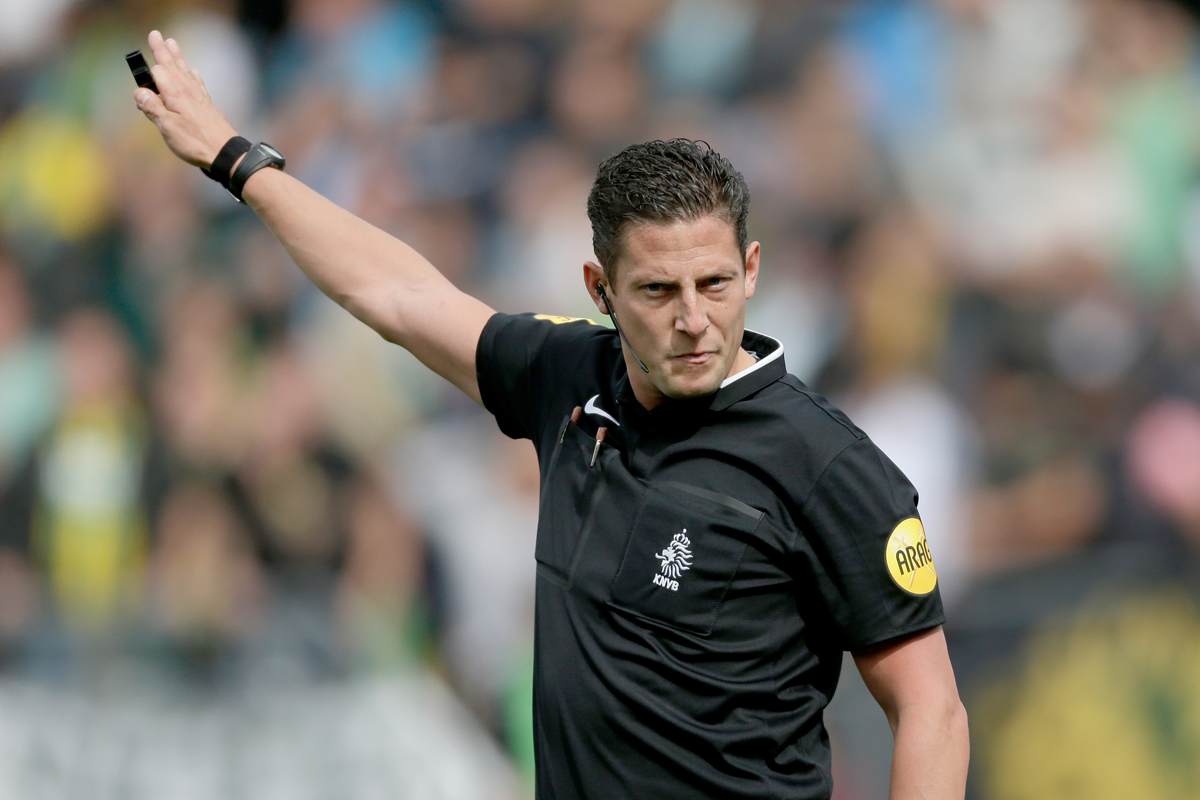 Manschot feels he has the obligation to explain his decision if he made a mistake. “It’s justified for the media to ask questions about a call”, he says. “It also gives me a platform to explain what happened. The referee gets the opportunity to tell the viewers at home what really happened and explain the laws of the game.” That’s why he also appears on Fox Sports tv channel after the supposed handball. “Explaining a situation – especially after making a wrong call – is sometimes difficult, but in my opinion I always need to comment then.”

The referee from Houten doesn’t read the bulk of messages on social media like Facebook and Twitter. He quit with that. “I would inform myself unnecessary with something that doesn’t interest me. I am afraid it would still influence me. It’s more important what the KNVB, colleagues and I find about my performance.” 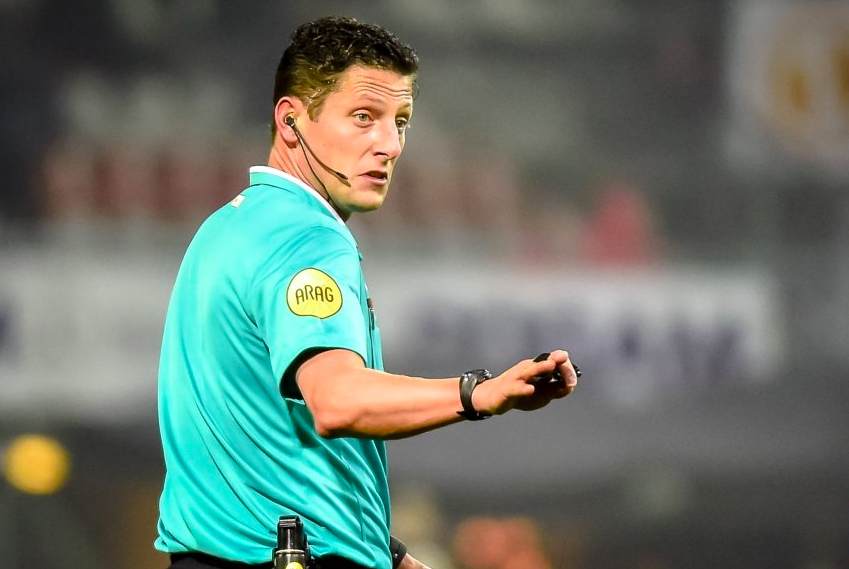 The Eredivisie referees are going monthly to the KNVB headquarters in Zeist. They get workshops, training sessions, physical tests, explanations about the Laws of the Game. “We analyse teams”, says Manschot. For example which tactics they use. “And some players will use for example their hands a lot, others will go down easy.” Manschot stresses that these players not always use their arms or will dive freely. “But it helps me to better read the game.”

Tuesday’s at 12pm the appointments for the coming football weekend will arrive in every referee’s mailbox. “After that I will check the club’s websites, read about suspensions, special events that are planned for the games. I search for the result of their previous encounter.” Including all training hours, this all takes 20 hours of preparation per week. “At a Uefa workshop they showed me a diagram that showed only seven percent of our time spent as referee is actually managing a game. The rest of the time is all preparation for those ninety minutes.”

Another place where referees can improve is the Centre of Refereeing Excellence, run by UEFA. In March this year Jeroen Manschot and two Dutch assistants Johan Balder and Erik Kleinjan were invited. “It’s a training for referees that in the future possibly will act at international games.” Tien days with intensive help from the European football association. “Train harder, analyse your games better”, says Manschot. “Tien days that are totally focused on refereeing.”

At CORE were referees from seven different countries. In September the Dutch trio will go back for another eight days. In the meantime they send their heartbeat stats to their mentors. “In March, every referee had to choose three points in which they wanted to develop themselves. I picked better fitness, better positioning and better reading the game. We also need to upload clips of our games about these points.”

Also after these CORE sessions Manschot wants to learn more. “Improving yourself will never stop, but I am more conscious of doing that now.”

Besides his time as referee, Manschot has a busy schedule. He works for the KNVB and gives workshops and meetings to other referees. He goes to the school of his girlfriend’s daughter, “because she was giving a presentation on refereeing”. “But weekends off are quite difficult to schedule”, he says. “Sometimes I whistle on Friday and am fourth official on Sunday’s. I got a maximum of fifteen weekends off every year and then I’ll try to schedule some time with them. Luckily I have the full support from home.”

After the 2016-2017 season there are maybe some chance to earn a promotion for Manschot. Also other Junior referees wish to make a step up the ladder. “I don’t see them as a competitor. I grant them everything, but I grant it myself the most. That’s the top sports mentality”, stresses Manschot. It doesn’t mean you can’t help the others. “In the end you need to coach each other, be clear and friendly when communicating. We are often our colleague’s fourth official. Finally you need to be there for each other.”

Some tips from Jeroen Manschot that you have read in this article:

Write down three points for yourself that you want to improve and why. Soon on DutchReferee.com more about setting goals as referee.