Michael van Praag has released his released his plans for the future of football. The candidate Fifa president has also announced his ideas on the future of refereeing. One of the things he aims for is an international referee academy. You can find all his refereeing plans in this blog post. 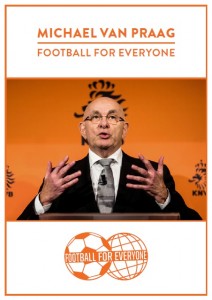 “Referees are essential to football”, says Van Praag in his programme. He wants more unity in referee education. “FIFA has high standards for its referees, but at the same time training and coaching is fragmented over the various confederations. Under my presidency, a central referees´ academy will be established, which will set and promote a world standard.”

One thing I’d love to see is that this academy also explains game situations to the public. Because Markovic got a match ban earlier this season (check out the situation where he tries to hit the opponent), I understand that Uefa agrees with the red card of Kuipers.

And also the offside situation with Wayne Rooney lead to a debate online. You can check out the case study I wrote about Rooney interfering with play or not.

There is – even under referees – a lot of discussion about these situations. It would be good if an international academy also explains situations to the public.

Also Hugh Dallas, former Scottish referee and member of Uefa’s referee committee says that consistance in education for referees is important. I read an interview with him on this subject on the Uefa website: “Consistent decision-making is a major aim for the UEFA Referees Committee, and video tests help to achieve this aim”, says Dallas on the Uefa website. “As an example, we expect a referee from Portugal to have the same opinion when judging serious foul play as a referee from Poland. It’s only fair to the competing clubs and national teams that the application of the laws is consistent, no matter which part of Europe the referee comes from.”

Van Praag also wants referees to improve in games abroad. “FIFA wants to invest in exchange programmes – mainly in the training phase – and support the activities of football associations and confederations.”

Good point. It’s not that you have to go to the other side of the world to referee your games. Even going from Denmark to England and viceversa is a huge change in football cultere and will have plenty of benefits for referees who want to improve.

Van Praag has also ideas to innovate football with the use of technology: “Furthermore, we owe it to our referees and supporters to apply technical innovations in the sport more widely, but only where this is feasible in sporting, technical and financial terms.”

“Besides a special referees’ academy, we also want to make the arbitrage of matches easier. With all the cameras present in the stadiums and the faster pace of the football matches themselves, it is impossible to expect the ‘men in black’ to see everything. Using technology will not change the game. Progress and innovation are nothing to be afraid of. They should inspire us to continue working towards a fairer and more accessible sport. In doing so, we should also listen to the wishes of the fans, trainers and players.” Van Praag wants a video referee to help the center referee make decisions. According to him Fifa should have a leading role in introducing technology and the video ref could make the competition fairer. “Above all else, it will strengthen the position of our referees.”

Check out the full programme of Van Praag.

What are your thoughts on this ideas on the future of refereeing? Please share your comments below.