Dagmar Damkova is the only female referee in the Czech Republic who officiates on the highest men’s level. As an internationale women’s referee she refereed almost every important match. Only the WC final is missing on her record with achievements.

When and why did you become refereeing?

Dagmar Damkova: ‘It was in January 1995 when I was almost about to give up my football career but then I continued one more year. However, it was hard to do both, so I decided for refereeing.’ 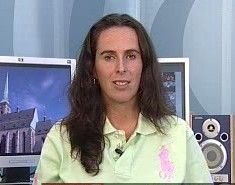 What makes it special for you?

‘It’s hard to say but probably the feeling that I can be on the pitch, in the middle of the game which I love and the importance of my presence there.’

You’ve got four appointments during the U20 Women’s World Cup in Germany this summer. You’ve also acted on EC and got a WC semi-final. How important are these youth matches for you? And are there any differences in how you prepare for them or how you experience them?

‘Every match is important for me. The importance of this tournament and my (and all referees’s) performance was that this was kind of a selection for the Women World Cup (WWC) 2011 in Germany. It means – if I had done a bad job, my chances to be selected would have gone down. So, I prepared for all the matches the same way as I always do.’

How do you prepare for a match/tournament?

‘I train 4-5 times a week (running, gym, swimming, cycling) and go regularly for a massage. I have a jaccuzzi at home, so after the match or training I spend there 15 minutes to relieve the pain and tiredness. We get the running plan from FIFA fitness coach and we have to send our files with polar results to him every month. So there’s no place to cheat :-).’

This is the first part of the interview with Dagmar Damkova. In the second and last part, which will be published next Saturday, she’ll tell you more about her role in the highest men’s league in the Czech Republic and her future goals.