Earlier this week I blogged about the fact that European referees will not be tested for doping. But they should summon players to be tested if there’s suspicion of using performance enhancing drugs. 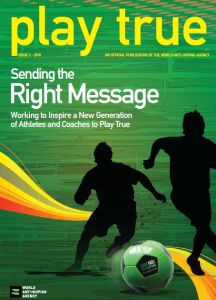 Cover of WADA magazine to Say NO! to doping

Referees have an active task next season when they suspect players of using doping, is what the UEFA Anti-Doping Regulations say. “If doping is suspected, the UEFA match delegate and/or the referee and/or the DCO are entitled to summon additional players to be tested.”

I was a bit surprized by that. How can a referee recognize doping or use of performance enhancing stuff? I checked out the website of the World Anti-Doping Agency (WADA) and found a pdf about recognizing doping.

The list contains a lot of things referees would not be able to check, such:

And what about these symptoms? characteristics and attitudes that come often with doping:

If you look at this symptoms, the referee has to summon most players to be tested for doping. Don’t think that’s a good idea. They should only handle if they see someone injects a needle in his body.

One thought on “How to recognize doping in football matches as referee?”