When a referee arrives at a club he get welcomed. Every club has organised that differently. Sometimes an 10-year-old kid who gives me a cup of tea, sometimes it’s a former referee who had to stop due to an injury. That got me thinking how professional clubs would do that. This is how referee liaison Manfred Wichmann welcomes referees at Schalke’04, a German Bundesliga and Champions League club. 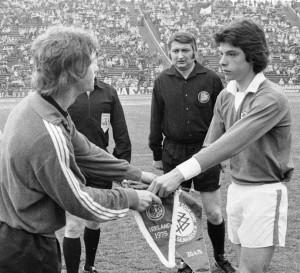 Referee Liaison Manfred Wichmann of Schalke’04 at the time he was still an assistant referee doing an international school tournament.

Manfred Wichmann (77) is a former Bundesliga (assistant) referee and is a referee liaison for more than thirty years. He took some time to answer a few questions for my referee blog.

“I started being a referee at the age of 17 and I was promoted quite quickly to a higher division every year”, says Wichmann. He is talking about sixty years ago. “Finally, I was allowed to be a referee assistant in the 1st and 2nd Bundesliga in 1968. After two more years I refereed my first Bundesliga match between Hannover 96 and Werder Bremen with Rudi Assauer playing for Bremen. In the following years I refereed a lot of interesting matches among them HSV-Bayern (with Beckenbauer and Breitner) or the city derby Hamburger SV versus Sankt Pauli. I also assisted some international games, for example Romania – Spain or the Cup Final in Kairo, Egypt.”

“When I quit being a Bundesliga referee in 1981, Herbert Burdenski (he shot the first goal for Germany after World War II) asked me to be the Referee Liaison Officer for Schalke 04. My tasks still are to pick up the referees from the airport or the train station and take them to their hotel, take them to the stadium and back at match day and provide them with drinks and food during the match.”

“Now I am also the Referee Liason Officer for international matches located in Gelsenkirchen and for the CL-matches of Schalke. Futhermore, I look after the 20 referees who referee for Schalke 04. I go out for dinner with them twice a year and I pay out the money they get for their referee clothing on behalf of Schalke.”

I wrote a story about the salaries of German referees before and asked Manfred Wichmann what he earned. “When I was a referee I got 72 D-Mark (German currency at that time; just under 40 euro’s) per match, now the referees earn 3800 Euro per match.”