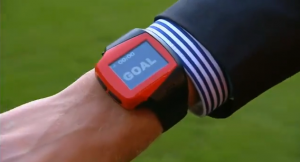 The hawk-eye system worked a bit too well in Dutch Eredivisie. Referee Danny Makkelie went crazy because of this new technology, which was used for the first time during a match in Dutch top league last weekend.

The reason: nobody had thought about the youth players from home team Utrecht who were trying to shoot the ball on the bar during halftime, says AD Sportwereld, a Dutch newspaper. Every time the players shot the ball in the goal, Makkelie’s watch buzzed and the text “goal” was shown.

Read more about how this system works.

The goal-line technology system is turned on two hours before the match to test it. It was the first time the system was used and technicians didn’t dare to turn it off because they were not sure if they could turn it back on.