If you missed it via different social media channels: I earned a promotion as a referee. Can’t describe how excited I am about it.

In the rankings in April I was in 4th position, but in the last weekends of the season there are a lot of chances for other referees to get a good mark as well. And how many referees would be promoted to a higher level? In the 2013/2014 season I became fifth in the rankings and only just missed promotion. 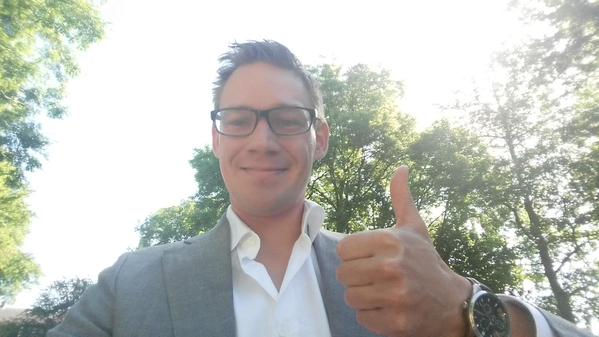 How did I hear it

The last matchday of the season is a big day for Dutch amateur referees. Not only are play-off finals played. All referees who get promoted or relegated will get a call from the KNVB. Hundreds of phone calls to make – and that’s just in my region.

I was a referee in youth group 3. A group where you can be promoted by your place in the ranking and also if you’re a young referee in the mentoring group (then you’re not on the ranking list). The number of referees who get promoted is not always the same. Last year four referees from the list and one from the mentoring group were promoted. How would this be this season?

I got a little anxious when two young referees form the mentoring group updated their Facebook status in “Yeah, promoted”. More positive status updates came in from other groups. My phone was still quiet.

Then I had to leave my house for the play-off game as assistant referee. I put in my earplugs – you never know if you get that phone call, I was in a good position. And after only five minutes on the road the call came. First some chitchat about how I was doing etcetera. I thougth: just tell me some good news.

The man from the KNVB then said: “Your journey to the game would be more pleasant. I can tell you that you got promoted. Last year you were close, now you made it.” A week later I got an e-mail with the ranking and my name was in “green” because of the the promotion.

That was a relief. But was that it? No!

Things to work on in the future

When you get promoted, it does mean you did a good job, but you are not there yet. During the second-last game of the season there was even a mentor plus some experienced referees who watched my game. I mentor is very unusual for my games. With 29 years I’m already too old to reach pro football. That’s why they focus on teenagers or refs in their early twenties – which makes sense.

The people who watched me had some good tips to work on:

And there are probably more things to work on, but these two at least to things I need to work on.

What are your goals for next season? What are things you want to get better at?