Dives, crazy tackles, aggressive coaches. That’s also football nowadays, but not everything is like that. Also lots of nice skills are shown, unexpected teams (Leicester) are crowned as champions and there’s also some good sportsmanship by football stars these days.

I found this clip of Dortmund’s Gonzalo Castro against Werder Bremen. He has the ball on the left wing and you just entered the penalty area. Five players of your team, inclusing you, are up against only four defenders. What would you normally as an attacker in the situation below? 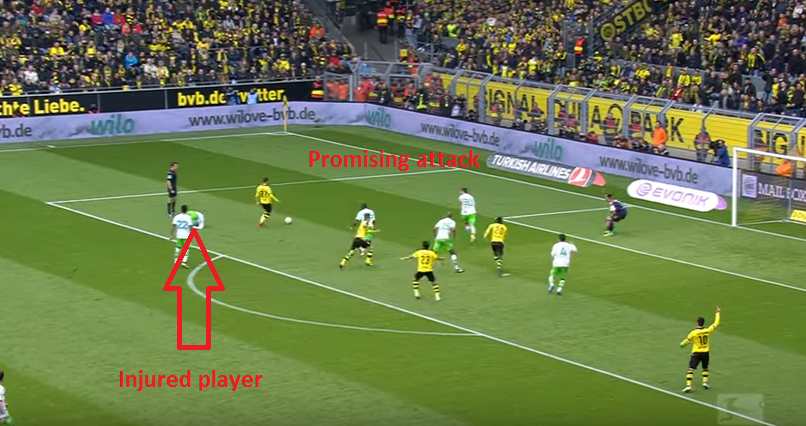 Castro sees that a defender is injured and he kicks the ball out. The injured player can be treated then. Check out the clip below.

Also from Germany, from a few years back. Aron Hunt seems to be fouled in the penalty area and the referee whistles for a penalty kick. Hunt admits he was not tackled and the referee overturns his decision. “I told the referee that I’d actually contrived it slightly. I did look for the contact, but then I noticed that their defender pulled out of the challenge”, he told about the situation.

Or this video clip from Saudi Arabia. Yes, I know the goalie should not hold the ball in his hands for longer than 6 seconds. We all know as referees. But when an attacker secures the shoelaces of the goalie, I would give them that extra few seconds. The attacker was not bothered by taking that extra seconds. The referee in the clip below gives an indirect free kick. The team who has to take the kick, shoots it far wide. That’s good sportsmanship in my opinion.

And Paulo di Canio was not known for good sportsmanship. Hard tackles, aggressive behaviour. But in the clip below he shows that he also has a different side. Good lesson for us: don’t be biased and expect the worst from players that are not know for behaving well.

I want to make a longer list with good sportsmanship. Please share your favourite moment with me in the comments below, on Twitter or send me an e-mail on jan@dutchreferee.com.