“You need to get uncomfortable as referee if you want to reach a higher level”, says Gerry Duffy. You’ve been thinking about your big picture as referee since the first blog post in this series. But have you thought big enough? This interview with Gerry Duffy will inspire you to think bigger and also shows you that you need to change.

Duffy proved himself that big things are possible. He was more than twenty kilograms heavier than he is now and his lifestyle was not so healthy. You maybe wouldn’t even see him run a single marothon, but he was open for change in his life. He set himself the goal to run 32 marathons in 32 days.

And he accomplished it. 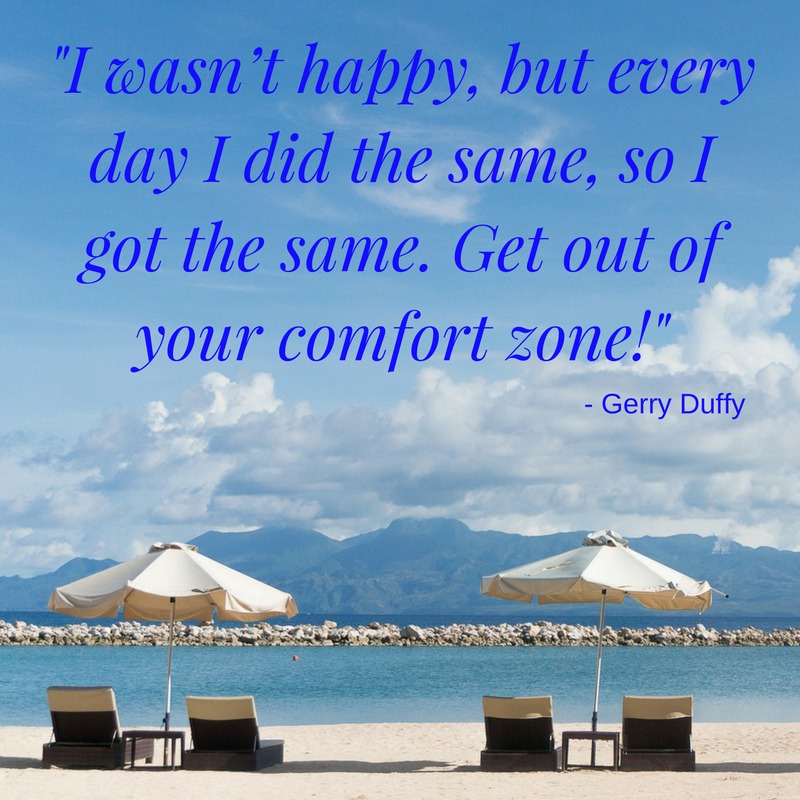 His live changed in a positive way. “But nothing worthwhile comes easy”, he says during a referee conference. “I wasn’t happy, but every day I did the same, so I got the same.” That can be you refereeing your game every week. And the next week, and so on. “You need to get out of your comfort zone to get happier.”

“It’s time for you to get uncomfortable. You need to move.”

If you really want to be successfull as a referee, you need to be outstanding, says Duffy. “Success is doing ordinary things on an outstanding level”. That success can lead to reaching your bigger picture, your ultimate goal.

The following tips from Gerry Duffy will not only help you finetune your bigger picture, but also will be useful when you start setting your smaller goals. In the following blog post you’ll get a strategy for effective goal-setting.

Surround yourself with great people

Make yourself a list of people who help you as a referee. Visualize it like Lucy Oliver, sports development officer at Sunderland College and wife of Premier League referee Michael Oliver, did. It’s not just people in the refereeing world that make you better at your refereeing job. Check this story on 4 types of mentors a referee needs. It will give you insights in what kind of mentors you have and which you need.

Duffy says: “Surround yourself with great people and make them your role models.”

Looking at #TeamYOU this morning with the group. Showing them some of the people who got me where I am today & who continue to support me! ???? pic.twitter.com/ZGFFde2JMX

If you’ll do the same, you’ll get the same as before. To reach a goal you need to do things in a different way. “So act like the person you want to become”, says Duffy. “Start showing the same demeanor and doing the same sort of physical training sessions”.

See yourself as solution of the problem

The problem (or challenge) you face is: you want to reach your bigger picture, but you’re not there yet. “Some people don’t see themselves as solution of the problem”, says Duffy. “You need somone to tell you the truth about things you do right and wrong.”

“The whole truth and nothing but the truth”, he adds. “You need such a person in the group of people who surround you.”

Always ref to the best of your ability

Sometimes you’ll get an appointment that does not make you happy. You maybe promised to do a friendly game and you’re sorry that you said “yes”. Or you got a regular appointment is at a lower youth league that usually is not very challenging.

That’s what Gerry Duffy experienced when accepting a speech. He knew the guy and agreed to give it for free. No money earned and it meant a six hour drive. He still put all his effort in that speech. At that moment is was a long drive home, but seven weeks later he got an interesting phone call. One of the attendees of that meeting was impressed by his speech and was asking him to speak at a national conference.

“It has proven to me that you always need to perform to the best of your ability”, he says. “You have to devote your time to preparation, whether it’s for a speech or a game. The attendees and players deserve your respect, so always give them a 100%. Even if you have to officiate a lower league game than normal, always referee it to the best of your ability.” There always might be someone watching who’s going to ask you for a big tournament or an FA member that has seen you have potential. “Small keys sometimes open big doors.”