It was three years ago that Chris van Rijswijk decided to turn over a new leaf. He set out to be a fitter referee and he succeeded. This April, having shed over thirty kilos, he celebrated by achieving a milestone objective: running the Rotterdam marathon. “Preparing for that moment took me three years”, said the Boskoop-based referee, who is a member of the Gouda Referees’ Society.

A big thank you for Ben from RefereeingBooks.eu for translating this story. 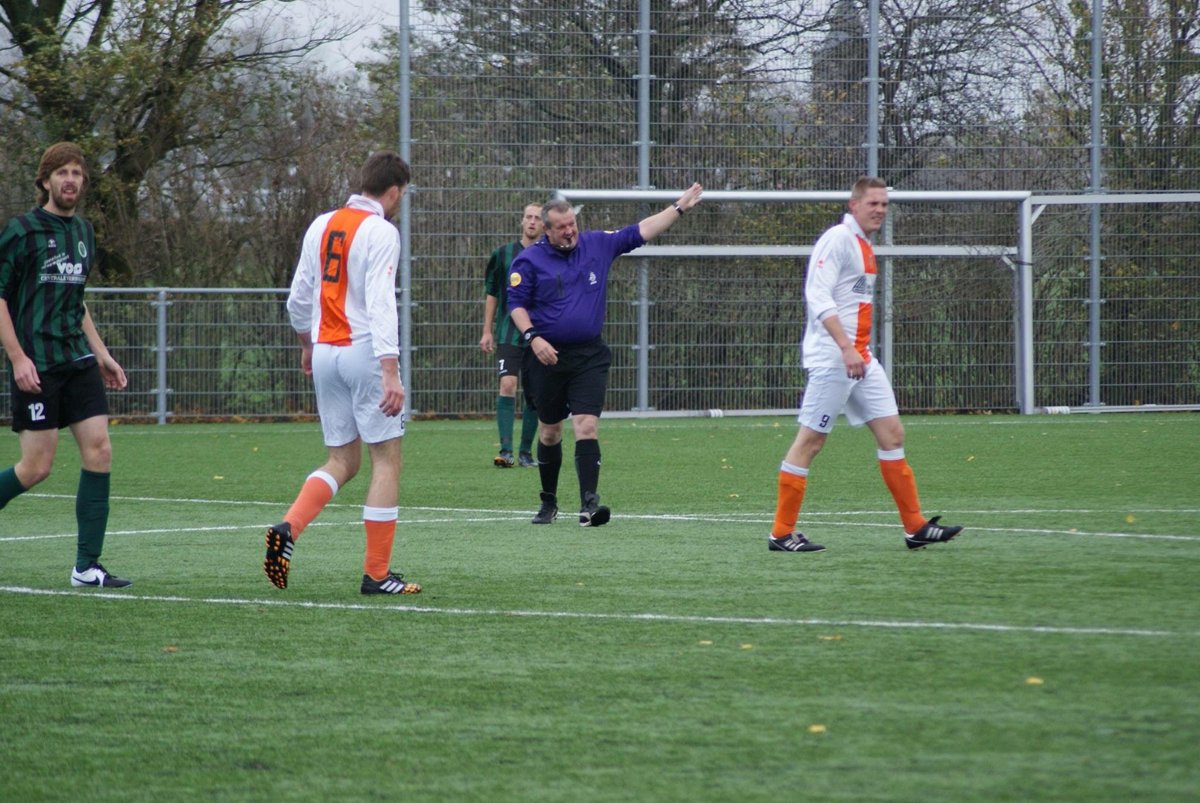 It all started at Chris‘s workplace. “I weighed 125 kg when I first picked up the whistle”, Chris recounts. “My co-workers would sometimes rib me a little about my weight. But they also challenged me. My boss was due to run the 5K at the City-Pier-City Run in The Hague, so they goaded me into taking part as well. In the end I set a better time than him, without any training, but it did get me thinking.” Chris cleaned up his act. “Well, being in shape is quite an important part of being a ref, right?” In addition, running a marathon had been on his bucket list for some time anyway, and he achieved this goal after three years. “I‘ve lost 30 kilos since that day at work.”

His training ethos has definitely paid off on the pitch as well. “Now that my fitness has improved so much, it has helped my performance no end. I can follow play closer up, which gets me less grief from players. Also, I used to collapse on the sofa after a Saturday match, but now I get up on Sunday with plenty of energy to ref another game.” 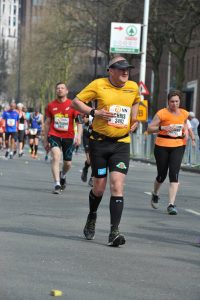 Chris is assigned to youth leagues on Saturday and the lower tiers of football on Sunday. For the 2018-2019 season he intends to switch to being an assistant on Sundays, for which he is currently taking a course. “It‘s quite intense, much harder than I thought. But I‘m learning so much! They‘re paying attention to posture, running style, you name it. I‘m going to combine running the line with reffing on Saturdays.”

Chris first started reffing in 2012. He took a refereeing course while being a referee coordinator at his local club, Floreant. “I was told I always knew better, so I ought to put my money where my mouth was.” At one time, circumstances required him to fill in for another referee at nearby club Be Fair. “It was then that I found being a neutral ref at clubs other than my own very enjoyable. And now I‘ve been a qualified referee for five years.” He delights in reffing every weekend. “I thoroughly enjoy the whole shebang. I feel a real leader on the pitch. The greatest feeling there is, even though the players don‘t always agree with your decisions.”

The local referees’ society in Gouda is a good place for Chris to keep himself fit. He has also joined a running club and seeks advice from a personal trainer and a dietician. “Without their support I would never have been able to run the marathon”, he adds. Whilst preparing for the marathon, he did skip a number of LOTG sessions at the society, but it was all done for a greater purpose. “You do find in retrospect that these sessions are important. I take away so much from them. Another benefit of these nights is being able to catch up with other refs, comparing notes. Always a great occasion to discuss key match moments.”

Apart from reffing himself, Chris also mentors newly qualified referees. One of his wishes is to pay more attention to mental resilience training for young refs. “If you asked me, I think many young refs quit due to aggressive parents and fans. You can see they have trouble coping.” Chris derives a great deal of energy from mentoring, all the more so if the referee is eager to learn and to up his or her performance. He mentored up and coming Bart Snelderwaard one time. “Great fun mentoring such talented young guns.”

Another issue he believes deserves more attention is ref coaching at clubs. “Looking at promising refs, you see that the right guidance and coaching starts early at clubs, preparing refs for the step to reffing at other clubs, in other leagues.” It is for this reason that Van Rijswijk is happy to see the Dutch FA having made a distinction between a course solely for club refs and a basic FA qualifying course. “The participants in the latter course – and they’re not just young people – are excellently motivated, having made this choice of their own accord. They are really keen to learn and it’s a great pleasure to mentor them. I am quite eager to learn too, which is one of the great things of being a ref: you never stop learning.”

Van Rijswijk is always looking ahead. “I once said jokingly: I want to be on TV”, he says, smiling widely. “I’m a big football fan and it would be a dream to officiate a pro academy match.” He had a close experience recently, watching the Feyenoord and Ajax U19s from the stands. “Just amazing, the discipline and quality exhibited on the pitch. I’d be over the moon running there alongside them. I do hope to be promoted to a league featuring academy teams some day. Even if I were demoted straight back the following season, I’d have at least gained that experience.”

Every week Van Rijswijk wants to be on top of his game. Things nearly faltered in the early stages of his career. His first mentor was less than forgiving about his appearance. “He told me to do something about my fitness. I had no presence on the field and awarding a penalty from the halfway line would erode my credibility. At the time, I disagreed vociferously, but in retrospect all I can do is admit he was right.”

Van Rijswijk was furious. He considered quitting. “Friends took me to the local referees’ society and it turned out even the elderly refs were outpacing me. Being in my forties, that hit home hard. I realized I had to make a change. I’m also very grateful to Martijn Mulders, a friend who likes to run a bit. We train quite a lot together. I’ve started using a heart rate monitor. These days I run up to 8 or 9 km every match, way up from 4 or at the most 5 when I started out.”

Having decided to turn over a new leaf, Van Rijswijk has even bigger plans. “In two years’ time I’d like to run a marathon abroad. And whatever anything else, I definitely intend to stay fit.”

A big thank you for Ben from RefereeingBooks.eu for translating this story.