You want to end the debate on off-side or diving? The new FreeD technology video system allows you to review situations from all possible angles.

Now that Blatter’s on his way out, perhaps FIFA might consider introducing new technologies to make the notion of ‘fair play’ a tad more realistic. One step in the right direction would be to allow referees to have instant reviews of situations. Increasingly faster computer image processing has more or less obviated the argument that such reviews take up too much time. These days, player protests take up much more time than it does for software to allow a multi-angle assessment of situations – or even to have the software take the decision.

Intel and Replay have come up with the FreeD technology, a step up to a viable video ref system. FreeD processes 5K images from 32 cameras positioned around the field of play, blending them into a panoramic view that can be fully revolved. This permits near-instantaneous, 360-degrees reviews of those hard-to-see offside or penalty decisions.

The FreeD cameras capture nearly 1 terabyte of information per second. It processes the images almost instantaneously, enabling users to review any play from various angles only a few seconds later. Until recently, the systems were too slow or too costly, but Intel now says that processors have become powerful and inexpensive enough to make such systems viable. It all comes back to the 50-year-old Moore’s Law, which states that processor speeds double every two years.

German pay TV provider Sky has started a pilot using the FreeD system. The trouble is this might actually be even more frustrating for viewers, for now they will see more clearly than before that the ref was wrong. That’s the thing: the referees themselves will not be given the opportunity to review plays, as this is not allowed under the current laws of the game. 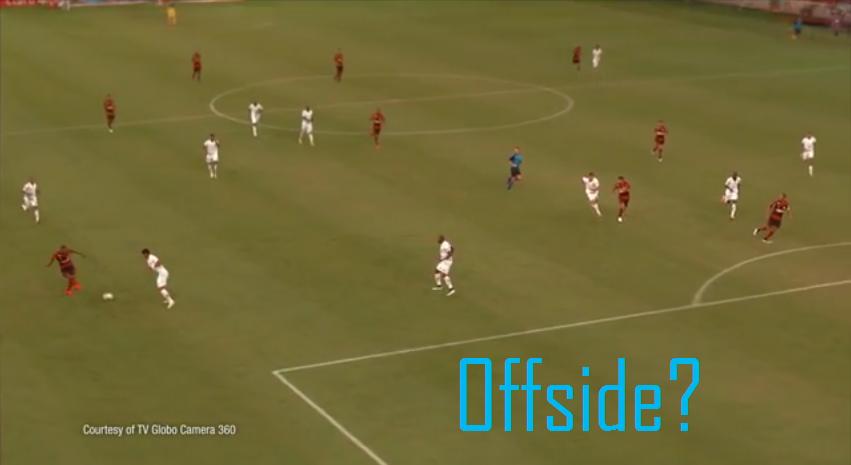 The IFAB (the body that determines the laws of football) has so far barred the introduction of video technology to aid referees. It does allow the use of sensors to determine whether the ball has fully crossed the goal line, but that’s where it ends. The Dutch FA wanted to test a video ref system in its national cup competition, but even this modest proposal was rejected by IFAB.

As controversial as leaving FIFA president Blatter was, he did seem to have slowly warmed to the idea of allowing technology onto the pitch. However, if he is succeeded by Michel Platini, things might take a turn for the worse, as the former captain of the French national side is opposed to video technology.

This story is written in Dutch by Tonie van Ringelestijn as “Videoscheids weer stap dichterbij met nieuw Intel-systeem” for Bright and published and translated with his permission. Translated by Ben from blog on Refereeing Books