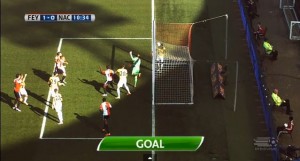 Referee Pieter Vink had to make two different calls this weekend. “Both I and my assistant had not seen that the ball was over the line”, he admitted. “And if there is doubt, I can’t allow the goal when then. I can’t explain then to players why I allowed the goal.” But he still signaled that a goal has been scored. It was the first hawk-eye goal in Dutch Eredivisie.

His watch started buzzing. “And then you’ll hear a voice in your ear saying ‘goal, goal, goal’. The I knew for sure I would make the right call”.

The 48-year-old referee from Noordwijk told that he normally has both teams moaning at him when making important decisions, f.e. if it’s a goal or not. “Now one of them came protesting and I could immediately show that watch”, Vink told Dutch news website NU.nl. “I thought that was really cool.” He jokingly added that it would save him some critics on his assessment report after the game. Earlier in the game the ball bounced back from the bar. Vink thought that was closer to a goal than the one he had to allow.

Check both situations in the video below:

Want to know how the Hawk-Eye system works? Check this story out.

What are your thoughts on the use of technology in football?