The first ever Gibraltar FIFA referees are given their international badge. A unique moment for the small European country. Referee boss Adrian Bacarisa can be proud, because his goal was to get the first international refs by the end of 2016.

I got the chance to interview the three new referees. Congratulations to: 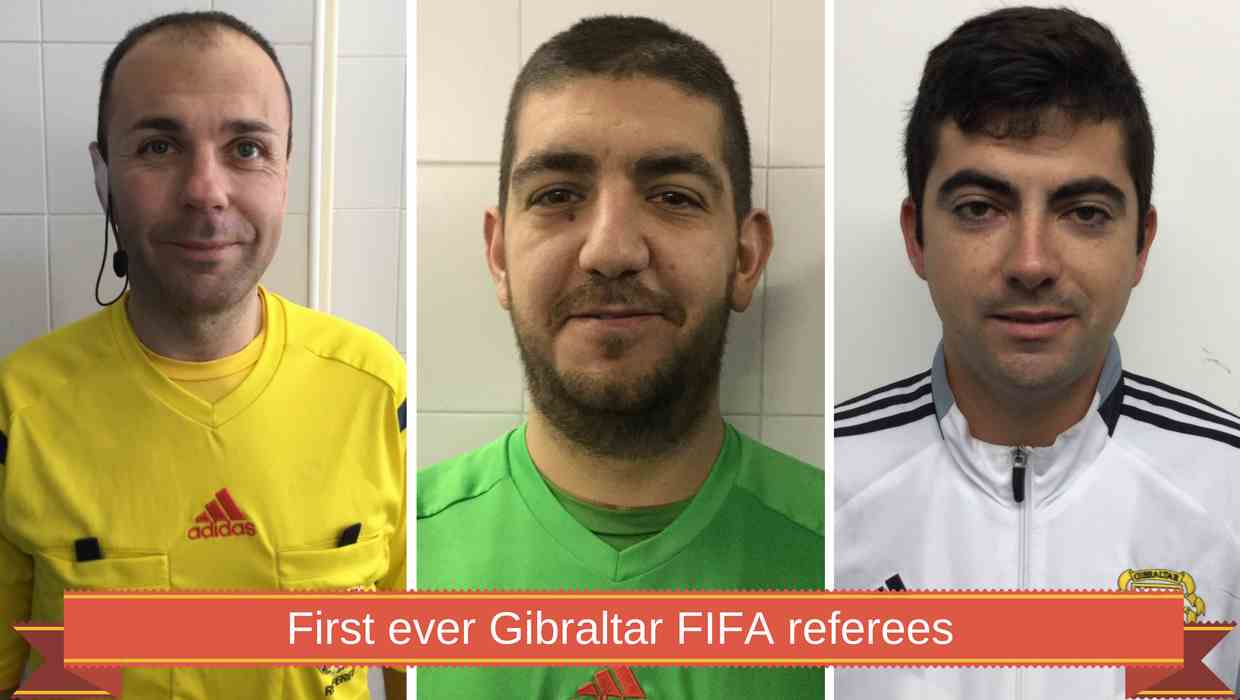 The word is out now. You’ve been chosen as first ever Gibraltar FIFA referees. Congratulations! What does it mean to you? How did you get the news?

Jason Barcelo: “It has been a long road getting to FIFA recognition. And being the first Gibraltarian Referee to be FIFA listed makes me very proud. I got a phone call from the GFA Referee Manager Adrian Bacarisa that I had been accepted into the FIFA list for 2017. It was brilliant news.”

Johan Ward: “Being selected as one of Gibraltar’s first official FIFA referees is a great honour.  It is a great reward after the commitment, time and effort that I have dedicated over the last 3 years to refereeing. A great sense of achievement. I received the news from Adrian Bacarisa. He informed me that I had been nominated by the Gibraltar Football Association and had been successful in the application.”

Zyl Sheriff: “Well for starters I’d like to thank you for having me in your blog. I got the news in the morning a few days ago via a What’s app group that us nominees had when we were nominated some weeks ago. I was overwhelmed and kept reading it over and over again as I could not believe what I was reading on my phone. This means I can now further explore my refereeing career. I will bring back to Gibraltar everything I can learn and make Futsal a more professional sport.” 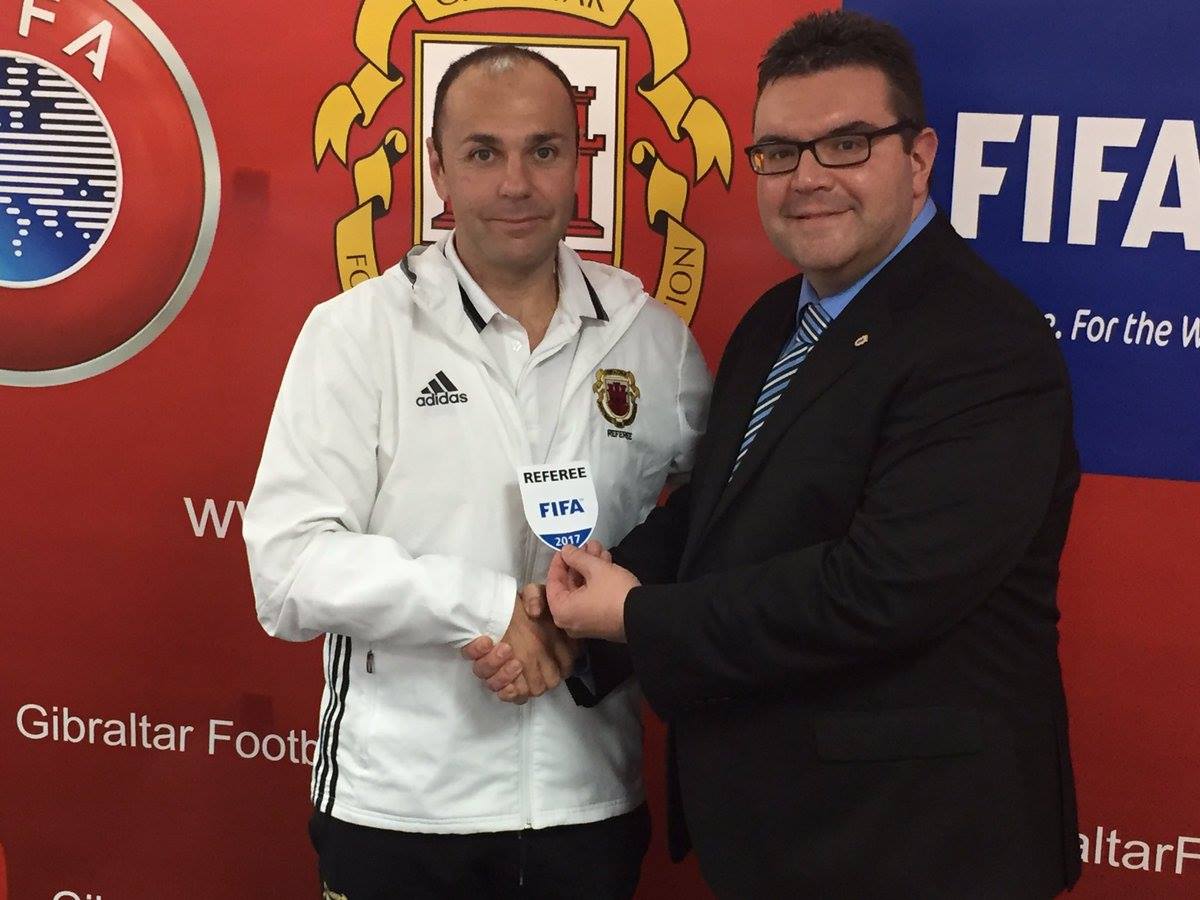 Start of their refereeing career

Please introduce yourself and how you got involved in refereeing

Jason Barcelo: “I started refereeing at the age of 16 years in 1997 after taking an interest in learning the Laws of the Game. I quickly progressed through the promotion ladder achieving my Category 1 Referee Certificate in time for Season 2001/02. I have refereed abroad on previous occasions in nearby Spain in friendly matches and in the Island Games Tournament.”

Johan Ward: “My name is Johan Ward and I am 34 years of age. I am married with three daughters and am employed as a Police Constable in the Royal Gibraltar Police. I got involved in refereeing thanks to a work colleague of mine, now the Head of Youth Football in the GFA. He convinced me to start refereeing in order to assist with the youth football.  I specialized as an assistant referee very soon into my refereeing career.”

Zyl Sheriff: “My name is Zyl Sheriff I’m 29 years old, born and raised in Gibraltar. Husband to my beautiful wife with two kids and another little one on the way. On the summer of 2013 I was approached by a friend of mine if I was interested in refereeing a small tournament which for some reason I accepted. I enjoyed it and decided to make it a career ever since. I started my refereeing career in august 2013 on the recommencement of Futsal in Gibraltar. That was just after we have been accepted as the 54th UEFA member. Since then it has all been hard work from my Futsal colleagues and I. After all the hard work and Gibraltar being accepted into FIFA I was approached by our refereeing director Adrian Bacarisa. He asked me if I was interested in furthering my career as a referee which I accepted immediately.”

Gibraltar’s referee boss Adrian Bacarisa told me in 2013: “I am extremely thankful to my fellow colleagues and UEFA personnel for supporting me in the whole process. I want to achieve the standards expected by UEFA and having been accepted today into the Referee Convention”. What did you all do to achieve higher standards?

Jason Barcelo: “Since Gibraltar joining UEFA back in 2013 financial help was made available. This meant that we referees could get specialised fitness training and technical instructions practically on a weekly basis. FIFA Fitness Tests were made mandatory and with this refereeing in Gibraltar has improved overall.”

Johan Ward: “In answer to Adrian Bacarisa’s quote the things that we (the referees) have done to achieve our high standards is the following; 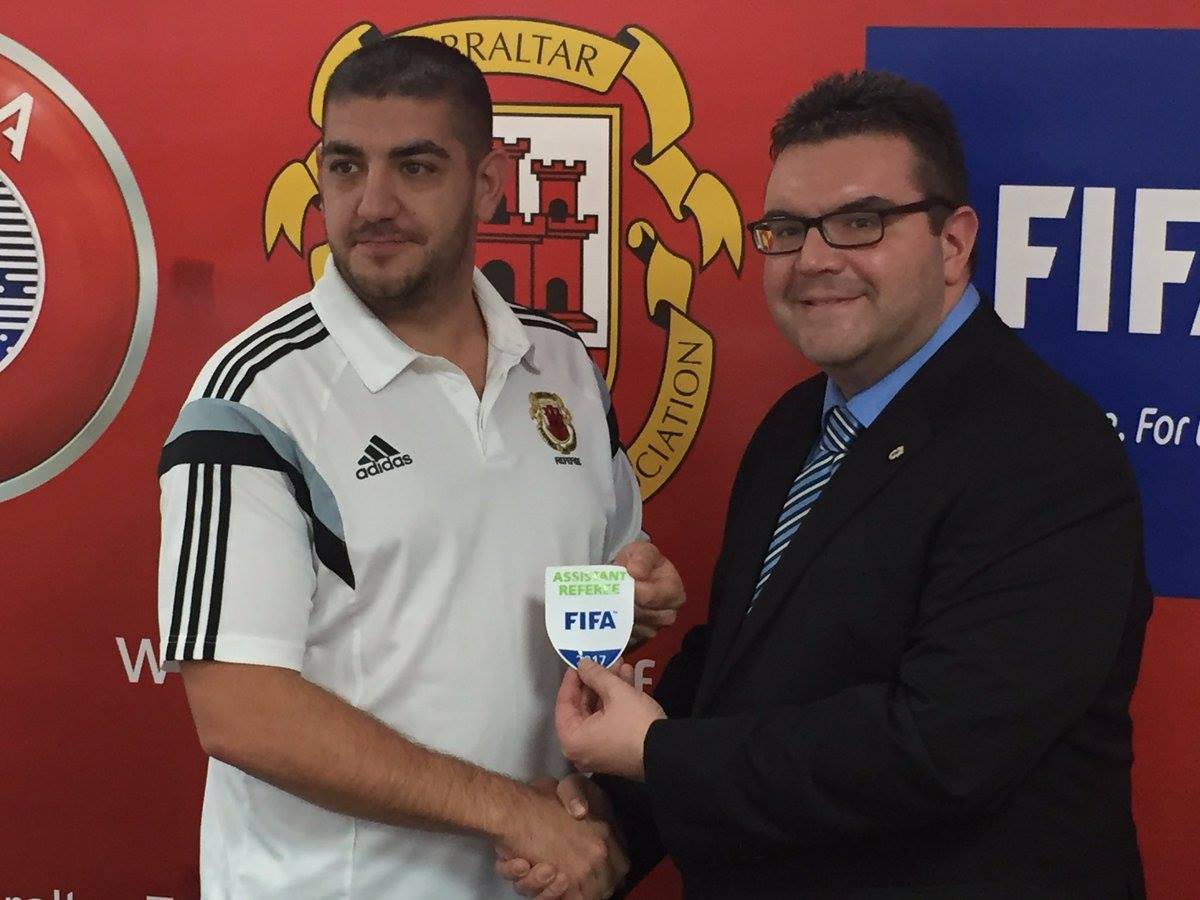 Zyl Sheriff: “Referees in Gibraltar both football and futsal have been having a strict training program. We get help from our fitness training instructor and school friend of mine James Alvarez. He has always been getting us all to achieve our highest standards in training and how to make the best of ourselves. I work night shifts as a refuse truck driver and I cannot make training sessions. That means I have to train solely during mornings. I train with advice from James and have Adrian to help me when practicing the FIFA fitness tests.”

Jason Barcelo: “In 2017 I expect for many new refereeing experiences and to hopefully travel abroad to different countries to experience the different styles of football, and cultures.”

Johan Ward: “For 2017 I expect more of the same with regards to refereeing.  However, there is the added incentive of continually improving my standard as an assistant referee and also to improve my fitness levels.”

Zyl Sheriff: “I expect to achieve high expectations and make Gibraltar proud as the small community that we all are. Here when someone receives a high achievement everyone in Gibraltar will feel that they have achieved it too.”

How will you make sure you’ll keep improving?

Jason Barcelo: “With the help of my referee coaches and colleagues both domestically and now internationally. I will also hope to learn the different refereeing styles from my new international colleagues. Hopefull I’ll take the positives into my own game.”

Johan Ward: “In order to keep improving I will ensure that I attend the seminars/workshops provided by the GFA Refereeing Department. I will take advantage of the training sessions provided by our fitness coach. I also will take note and consider taking the advice of our dedicated referee observers, as well as to ensure that the diet/training and match preparation is adhered to.”

Zyl Sheriff: “After being accepted as a FIFA listed referee I cannot let my guard down and think that this is the end. I now have to work even harder than ever to keep improving. Being such a small community everyone in Gibraltar is well-known . When refereeing I have many good friends on the pitch and outside of the pitch which sometimes tends to make refereeing harder. But I cannot let that get to me and need to enforce the laws of the game the best possible way.”

What chances are there for referees from small countries like Gibraltar?

Jason Barcelo: “Despite being a smaller nation, Gibraltar is growing rapidly in the international stage. And with the correct progress and attitude, there is no limitations to any referee, regardless of their nationality.”

Johan Ward: “Well the recent trend seems to show that there are opportunities available for referees of small countries such as Gibraltar.  Recently one of my colleagues successfully completed his UEFA CORE programme. Another group of colleagues went on a referee exchange to Malta. And our youth referees continually take part in summer international tournaments and now the three of us have been accepted into the list of FIFA referees. All this shows that the opportunities are available.”

Zyl Sheriff: “I’d have to say that we have an equal chance as any other country in the world and we are here to try and prove that.”

Tips for you to improve

What tips do you have for other referees to help them improve?

Jason Barcelo: “My tips for younger referees would be to make sure they enjoy their refereeing As this is a line of work which you need to enjoy. I would also advise the younger referees to take advice from their technical coaches and physical instructors. That’s because the game is constantly becoming more rapid, and fitness is essential in the modern game.”

Johan Ward: “Be yourself and relax whilst officiating.  Remember that pre-match, during the match and post-match you are the example to follow and the person of authority. And as a result you have to present yourself adequately.  Be professional, treat everyone with respect and most of all enjoy the game we all love.” 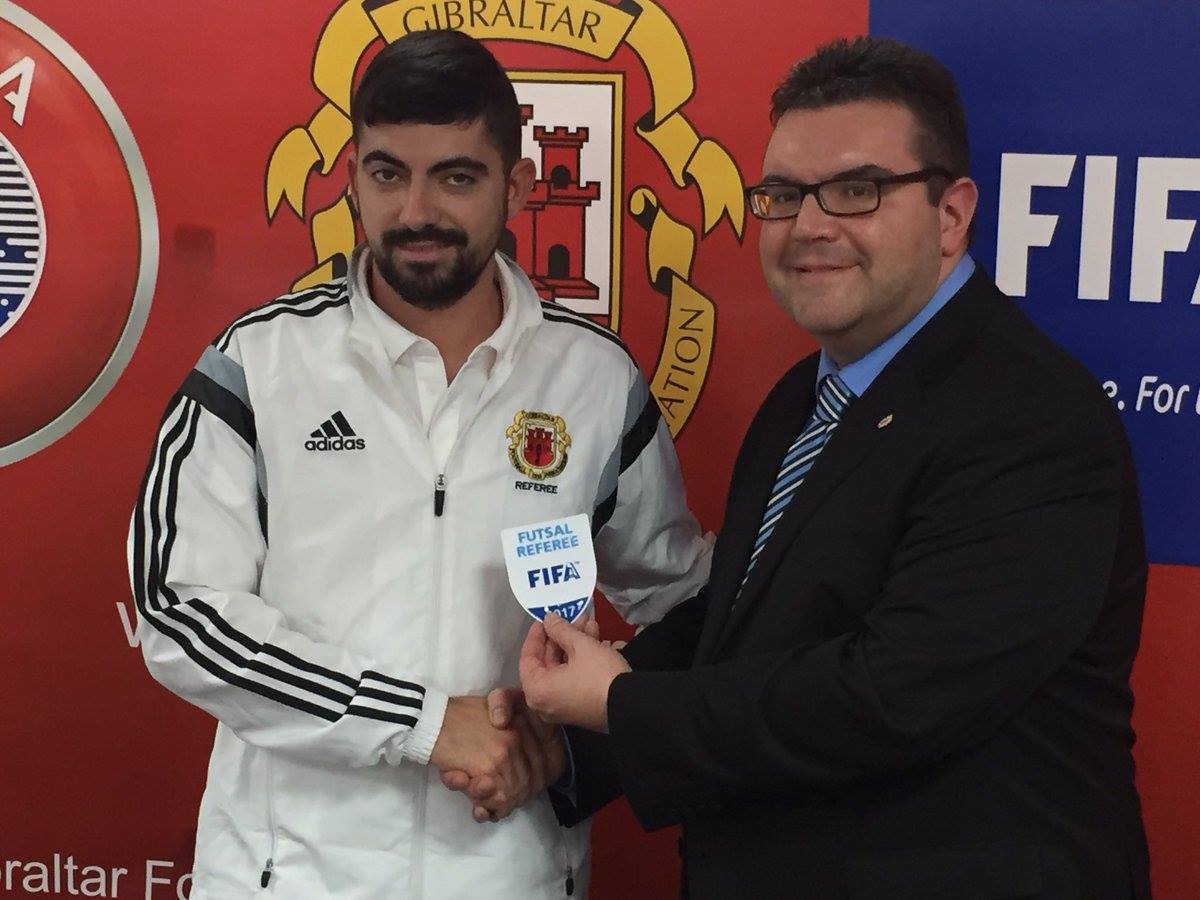 Zyl Sheriff: “Being focused and being very concentrated in a game for me is the most important aspect, as you can lose concentration very quickly in a game.  It could turn out to be worse for you. I have my own way of refereeing and only by experience you get to make yourself a better referee if you really want too.”

The future of the first ever Gibraltar FIFA referees

What are your goals for the future?

Jason Barcelo: “With this fantastic new opportunity my goals are to educate myself further as a referee. I have to improve my performance on the pitch, and to help the younger referees, with the new experience I will gain.”

Johan Ward: “My goals for the future is to keep improving and continue representing my colleagues, team/family/country to the best of my ability.  If I have the chance to officiate an international game, then that would be a great moment in my life.”

Zyl Sheriff: “My goals for the future is to improve as a Futsal referee. I want to make Gibraltar proud and encourage younger generations that refereeing can be a very highly rated career and also enjoyable.”