2017 is a great year for Donatas Rumšas so far. The Lithuanian referee gets great news earlier this year. He will go to the u17 European Championships in Croatia. “For me it was a big suprise to be selected”. Donatas Rumšas shares his experiences from this tournament. Plus he also talks about something that possibly is the best step in his refereeing career. He changes his job to have more time available for refereeing.

Congratulations with your appointment for the u17 European Championship earlier this year. How did you experience the tournament?

The impressions from the tournament was very good. We spent there  almost 3 weeks with the referees from all over the Europe. There we had a lot of training sessions, matches to referee and game analysis. It was very nice to share experiences with colleagues from other countries. I can say that those three weeks gave me a lot of as referee and as a person. It was a busy month but I enjoyed the time in Croatia.

Every referee can improve

What did you do to reach the tournament?

To be honest what I did exactly to get there I don’t know.  I had a quite good season before the tournament and I got an invitation for the U-17 final tournament in Croatia. For me it was a big suprise. I did not expect this appointment. I train 5-6 times per week. There are a lot of things to improve for every referee, but now I focus on management of players. And I also work on my personality. 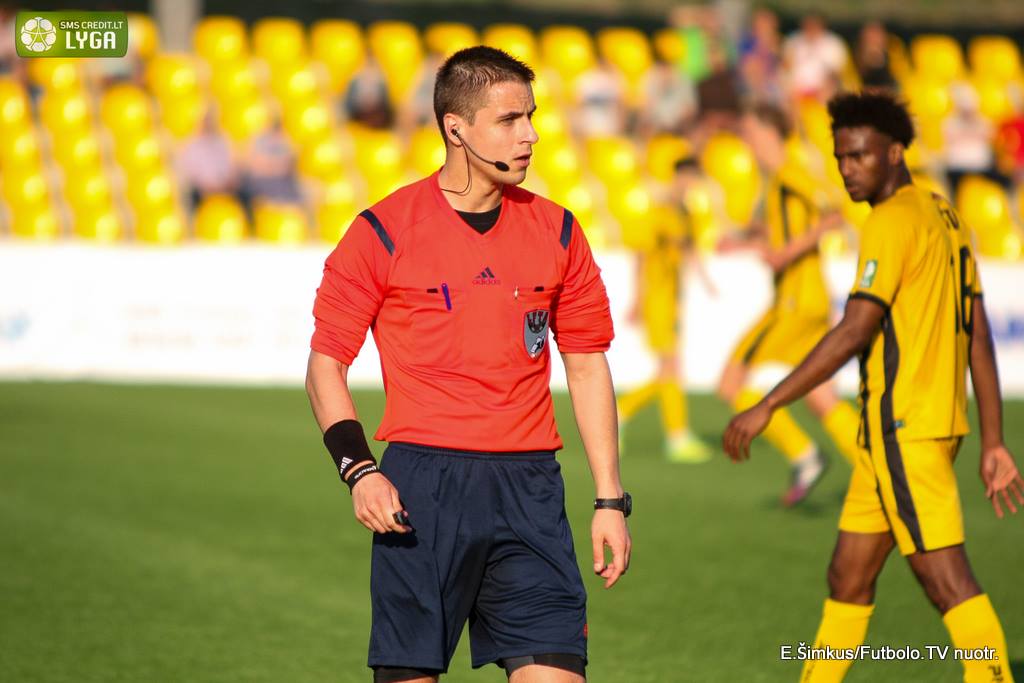 You’ve officiated 4 games, including a quarter final. You’ve worked with assistant referees from Northern Ireland, Russia, Armenia, Latvia, Czech Republic, Wales, Kazakhstan and Israel. How is it to work with a different team for all matches?

It was very interesting experience for me, because in Lithuania I used to work with more or less the same assistants. In this tournament all the referees and assistant referees have a lot of expierence, so to work with them was a pleasure for me. I have prepared the standard pre-match discussion for this tournament. In this talk are all the main things what I expect from my team.

Refereeing with people from different countries probably gives you nice insights in their way of preparing and officiating. What are the best things you learned from them?

For me the best thing was that I had an opportunity to see how different referees prepare for the game. I found how accurately they are assessing their games, so I will try to implement this component for myself.

How Donatas Rumšas became a referee

I started to referee in 2006. I was playing in local city youth team and my coach asked me if I want to try to referee few games. From the first game I like it and till now I am enjoying refereeing very much.

I like refereeing so much because every game is a different. You never know what will happen in your next match and you have to try to do the best you can. Till now I have never thought about quitting refereeing.

Get more time for refereeing

The hardest problem for me was to synchronize the job and the refereeing about five years ago. I had to work long hours in that job and quality of refereeing started to decrease. So I left from that job and found another one, which let me spend more time for refereeing.

You’re already in the middle of the season. Is that an advantage for you now the Europa League starts again? (and how difficult is it to referee a game when there’s no season in your country?)

I think it is a great advantage for us because we have a lot of games and we are prepared well. But it is also a disadvantage for the second part of the Europe’s season because we are at the preparation stage at that time. So it is very hard to referee.

What do you expect for the rest of this season?

This year is also quite good for me, so it would be very nice to keep the high level of refereeing till the end of the season. I am working day by day to be better than I was yesterday and I think there is no soldier who don’t want to be a general.