DOGSO by pulling the opponent’s shirt? That’s still a red card when it happens in the box.

Watch the match situation in the last minute of FC Twente – Cambuur in the Eredivisie.

Match situation
A FC Twente winger swings the ball into the box from the left.

Now think about the following question: What criteria do you need to look at if the defender is denying an obvious goal-scoring opportunity?

The ball passes the first defender and is about to reach striker Luc Castaignos, but he is not able to play the ball. If you have a closer look, you will see defender Jamiro Monteiro is pulling his shirt. 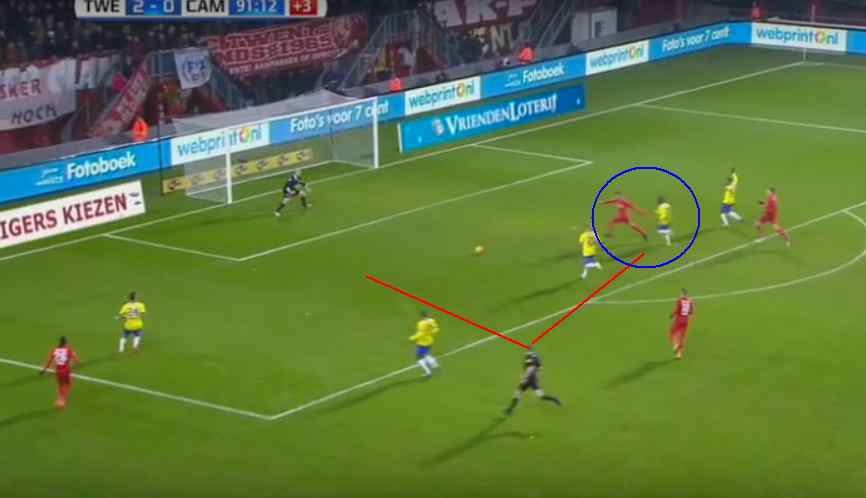 As you can see: the referee’s view is not obstructed. He has a clear view on the situation.

DOGSO by pulling or not?

Does the attacker have a clear shot at goal when he would not be fouled? I’d answer this question with yes here.

Coming back at the question I ask earlier on in the post. Did you know the criteria you need to look at if the defender is denying an obvious goal-scoring opportunity? The following must be considered:
distance between the offence and the goal. The defender pulls the shirt about 13-14 metres from the goal. A place from where you can score.
general direction of the play. The player is moving towards the goal.
likelihood of keeping or gaining control of the ball. The ball is coming via the ground, so is easy to control
location and number of defenders. There are four defenders and a goalie in the penalty area, but the attacker is closest to the goal.

The rules have been changed in 2016-2017, especially for DOGSO situations. But the Laws of the Game (page 89) are clear. “Where a player commits an offence against an opponent within their own penalty area which denies an opponent an obvious goal-scoring opportunity and the referee awards a penalty kick, the offending player is cautioned unless” – and here it comes – “the offence is holding, pulling or pushing.”

That means sending the defender off is the correct decision.

5 thoughts on “DOGSO by pulling is still red (case study)”