Deal with troublemakers immediately, says Bjorn Kuipers. During a presentation Kuipers shows a clip of his 2014 Champions League final between Real Madrid and Atletico Madrid.

Spanish temper, but as referee you need to deal with that. The clip below starts after Raul Garcia has made tackle and stopped a promising Real attack. You’ll see Björn Kuipers show a yellow card to the offender first. And then Sergio Ramos comes in …

Ramos came over only to react to Raul Garcia. “Sergio Ramos is constantly making a nuisance of himself”, says Kuipers. “And he’s quite a pro in that.” Sergio Ramos isusing every tactic available to him to unsettle and unnerve his opponents and the referee alike. “Deal with troublemakers immediately”, says Kuipers. “If you don’t deal with these players, that weakens your position. You need to tackle that kind of behaviour.”

And how did it help Kuipers? “Do you know how often Ramos came to me?”, says the Dutch Fifa referee. “Quite a lot, but only to be kind. ‘Well done, referee’ or “Nice, mr. Kuipers’.” 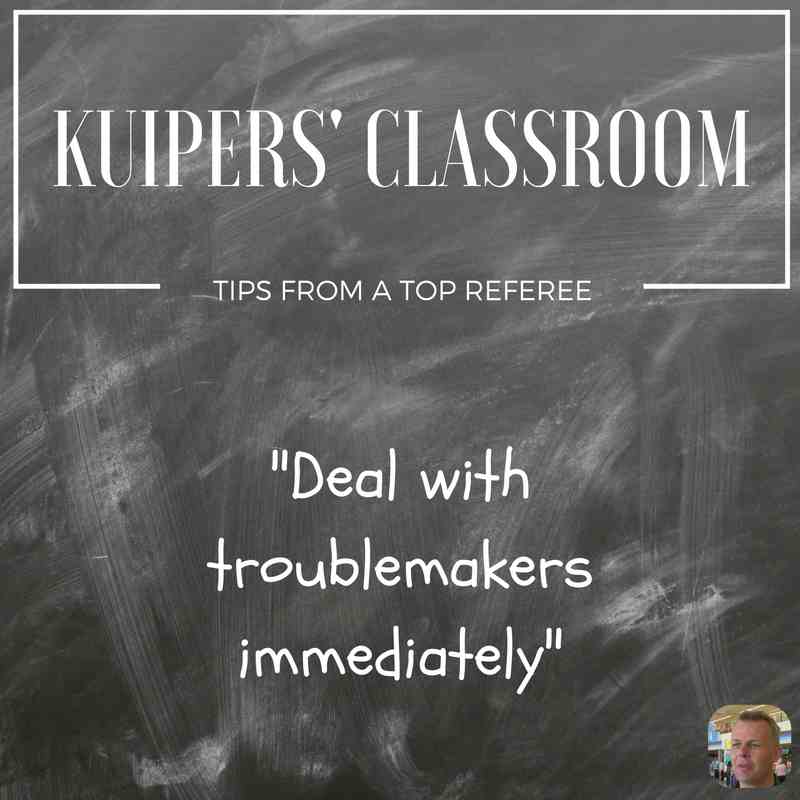 My story: deal with troublemakers

Recently I officiated a game where nothing happened in the first half. The second half got way more exciting with goals on both sides. Sometimes a stern warning would do, but in my own opinion, I could have drawn a line much earlier. Sometimes players need some clarity and issuing a yellow card can prevent players from complaining constantly.

That’s what I realised after the game when I asked myself how I could have performed better. There were no real troubles, but it’s always good to evaluate your performance. I found a good thing to focus on during the next games and make sure I deal with troublemakers immediately.

How do you deal with troublemakers?

And please make sure you evaluate your games afterwards. That will help you a lot.