The dead Dutch linesman trial started today in court. Suspects could speak in court today. Some did, but their stories didn’t always match. 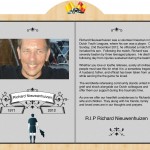 Back to the 2nd of December 2012. Youth teams of Buitenboys and Nieuw Sloten were competing with each other. Richard Nieuwenhuizen was a linesman of the home team – in the Dutch system most teams have their own (non-neutral) assistant referee. Just a few minutes before the end Nieuw Sloten scored the 2:2 equaliser. The goal scorer walked by the assistant referee and said to him the AR should ‘keep up with him’ when he ran to the goal. “He was biased and very stern that match”, one of the suspects says during court day 1. My source is the liveblog of Nu.nl, Dutch biggest news website.

Right after the last whistle from the referee, the teams ended up in a fight for about a minute. Nieuwenhuizen has scolded at the players from Nieuw Sloten, is what one of the players (a suspect) says in court. A few hours after the match Nieuwenhuizen becomes unwell. He died one day later in the hospital.

Read previous blog with full story about the Nieuwenhuizen incident and things that followed in past months.

Below you can find the most important things about the first day in court.

Other facts about the trial

Most important things from the second day in court in the case of the dead Dutch linesman:

The district attorney will make is plea tomorrow. Then we’ll hear what sentence he’s asking for the suspects.

Dutch professor in International Criminal Law and lawyer Geert-Jan Knoops thinks it’s possible that the suspects in the Richard Nieuwenhuizen case won’t be punished. “The criminal law has its limitations”, he says to Nu.nl. “There’s no collective liability (in The Netherlands, jth). Everybody’s guilt should be individually determined by the court. I think acquittal is possible in this case if it’s not clear who did what.”

Most important things from the third day in court were the sentences demanded: