The first blog after the referee conference is the story of GAA referee David Coldrick. Don’t know him? I didn’t either. But it doesn’t matter. Just follow one of his tips: “You can learn from refs in all sports.”

In the blog below you’ll find some advice from David Coldrick, 7 lessons I learned during the conference in Dublin.

GAA is two sports by the way. Hurling and Gaelic football. Coldrick referees the latter. Here’s a video impression of what the sport is about:

Referee David Coldrick is a famous Gaelic football referee who officiated the All-Ireland finals in 2007 and 2010. I was pretty young when I got my first one in 2007, but I think I’ve learned my apprenticeship. But my advice would be: don’t rush to the top. There is something to learn at every rung of the ladder.”

Lesson 2: learn from other sports

“You can learn from referees in all sports”, David Coldrick says. Gaelic football players from Ireland play for example matches against Australian rules football teams. Those matches are played with international rules and Coldrick got the chance to officiate it. “I got the opportunity to learn from the refs from another game and work with my colleagues from Australia. There’s always two referees, one from each country, on the pitch during an international rules match.”

Lesson 3: show your human side

Would you talk with media as a referee? David Coldrick does. “No, I don’t comment on specific incidents, but I’m always available for Gaelic football questions in general”, he says. “All sports need media for profiling and promotion.” That’s why he agreed to be part of the documentary Men in Black. “There is a huge amount of communciation between players and refs. People don’t see that. This documentary shows the human side of refereeing.”

Only aired in Ireland yet, would love to see that myself. Check below the trailer of this documentary.

Lesson 4: Prove yourself each year

It’s not guaranteed you’ll have another great season after you got a final previous season. “Prove yourself each year even if you got the final last year because of a good performance.” Coldrick says that referees shouldn’t be too easy-going, but always try to to your very best.

Mental toughness, a difficult thing for referees. The GAA referees are amateurs and do have a job in daytime. Coldrick showed video’s of a game where he made a wrong call. “My head wasn’t where it should have been”, he admits. “It was a hectic day at work.” What I learned from that is that every referee needs to find a way to make his head clear before a game. Try to find a habit that makes you focus on the game or find a person you can call.

Lesson 6: learn from your mistakes 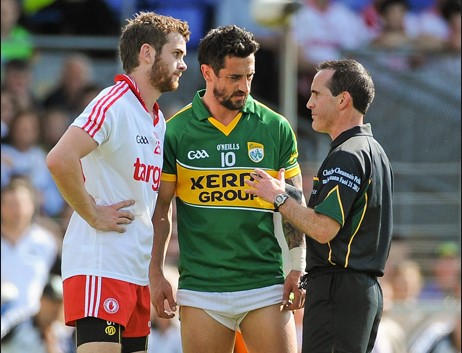 David Coldrick is happy he got the chance to have refereed to All-Ireland finals and will always find the motivation to try and get another one. During the meeting in Dublin he also told about the lows of his career, with a few video examples of mistakes he made. “I know refs are their own harshest critics”, he says. And to become a better ref, he adds: “You need to reflect on poor decisions and check what you need to do to stop making them.”

In Gaelic football video footage is shown during the game, but when there is a bit of controversy, the screens go black.

Coldrick’s description of the moment he realises he possibly made a mistake, is fantastic: “The hum of disapproval went around in the stadium.”

Lesson 7: be able to change

That was for me a great speaker I learned a lot from.

I got a two questions for you to comment on below: