Johan Cruijff and refereeing, not always the best combination. The Dutch football legend, who died on March the 24th 2016, was critical about referees and their decisions. He discussed a few in the newspaper stories he wrote. Some interesting views about and from Johan Cruijff about key “situations” with referees. And finally the minute of applause in the Amsterdam Arena in minute 14. 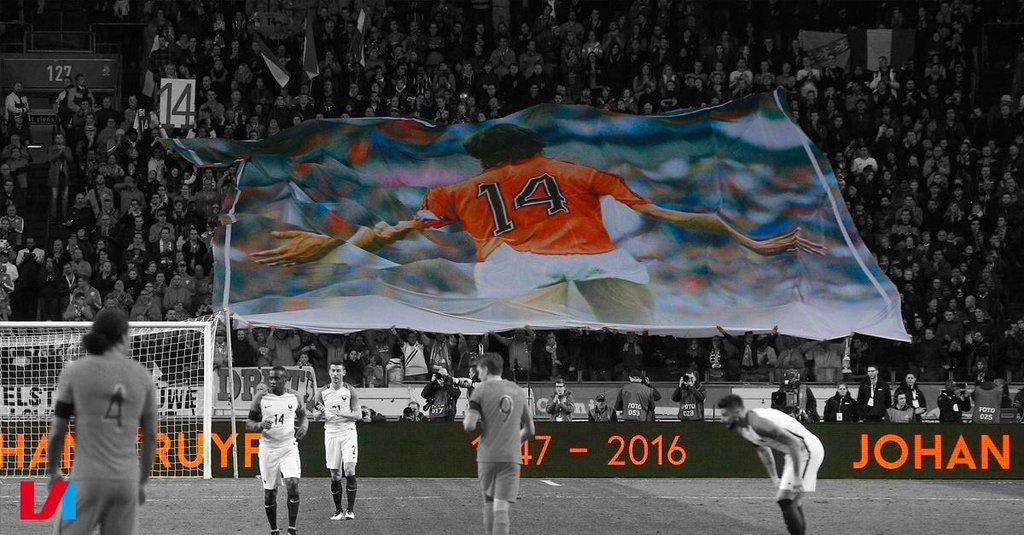 Let’s start with a quote from Cruijf about the red card he got during his second international game. He talks about East-German referee Rudi Glöckner: “That man doesn’t understand a thing about modern football. He didn’t even know I was playing football with my hands. That referee said I hit him or threatened to do so, but that’s pure nonsense.” Cruijff’s friend Piet Keizer starts laughing when he remembers the situation. “Denying such things was typically Johan. Of course he gave (referee) Glöckner a slap”. The Dutch FA suspended Cruijff for a year of international games with The Netherlands – but got an invitation for the national team after 8 months due to pressure from the media.

Johan Cruijff talked a lot during the games he played. Constantly trying to influence the referee. “That’s the behaviour of a someone who’s not a good loser”, says former top referee Charles Corver to the Dutch national TV. “Cruijff was a person who wanted to protect himself by influencing the referee even before one hard tackle has been made. His chatter to the referee is a little innate.”

That’s also the experience from Manuel Diaz Vega, former top referee from Spain. He experienced Cruijf as a coach from Barcelona. “He played all his trump cards in an easy way to gain as much benefits as possible. There was no chance he didn’t take.”

Those quotes come from national media and are published in articles online. I cite from NOS, Voetbal International.

In the book “Voetbal” (EN: football) is a story about Cruijff and his famous penalty. “After the whistle from referee Jan Manuel Cruijff did not shoot the ball directly at the goal, but passed it to the side where Jesper Olsen was springting forward (entering the penalty area). The Danish player had no problems to pass by the overwhelmed Helmond [Sports] goalie Versfeld and pass the ball back to Cruyff. He finished the unique sitution, put the 2-0 on the scoreboard and revolutionised the world of football.

One minute of applause

Referee Felix Zwayer stopped the game Netherlands – France in the 14tht minute, right after a goal from France. 14 was the number of Johan Cruijff and all fans and players gave him a standing ovation. An applause for the best Dutch football player ever.