A camera on the line to determine if a goal is scored. Seems fair. But do the costs of goal-line technology weigh up against the advantages?

In the Premier League it has cost each team around £250,000 to install the systems. That’s an indication of the costs for all countries. 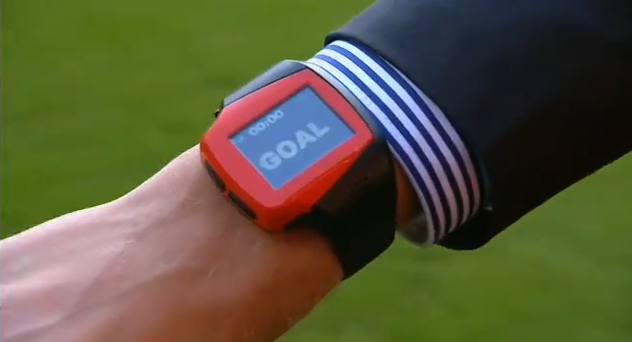 Will costs of goal-line technology prohibit smaller leagues of using this watch?

“If you look at it from a sportive or technical point of view, nobody can have objections against goal-line technology”, former top referee Jan Wegereef said to Helden Magazine in July 2015. “But if you look at it with a financial approach, it’s different. In the last season (2014/2015) in the Eredivisie there were only five situations with doubt about goal or no goal.”

“That means once in sixty games. So a club really needs the goal-line technology once per four seasons (about 15 home games per season, DRB). The chance it’s a match-deciding goal is thirty percent. And if it’s a game between the numbers 9 and 10 there’s even less importance.”

The final conclusion of Jan Wegereef: “To summarize: only once in twelve years the use of goal-line technology can be decisive. That would be a poor investment.”

Bigger competitions, with more money, have introduced goal-line technology. England, France, Italy and Germany use the system. It also has been used at the recent World Cup and Uefa will use it at Euro 2016 in France. But where are the other countries? The KNVB uses GLT in one stadium for a few years now. During it’s premiere it was clear a goal should not be given. Check that situation.

The Dutch FA are in favour of the technology, but will decide after this season if it will be worth de investment to introduce GLT at all stadiums. And even in a rich competition like the Bundesliga the technology was too expensive at first glance. Despite a “phantom goal” being scored by Kiessling, the clubs found it too expensive. Only before the start of the 2015-2016 season they changed their opionino.

The use of GLT in MLS might occur in the future, but high costs are a major reason not to use the new technology. In 2013 MLS Commissioner Don Garber said his league doesn’t need to be the most innovative and he wanted to wait how things worked out. “It had us take a step back and pause and try to figure out is the value of having goal-line technology worth investing millions and millions and millions of dollars for the handful of moments where it’s relevant?” Garber said. http://www.orlandocitysc.com/post/2015/12/15/91st-pros-and-cons-goal-line-technology

Also at the other end of the world in Australia there’s a call for the use of technology after an incident in a game of Melbourne Victory. In the video below you’ll see Guilherme Finkler’s free kick crossing the goal-line, but the goal was not allowed. The game ended 2:2.

If you listen carefully you’ll here the reporter say that “the linesman is not in position”. Because the assistant referee has to check offside as first priority there, he won’t be able to be on the goal-line to spot the goal. The Football Federation of Australia chooses another solution than GLT. Also here the high costs stand in the way. Extra officials will be appointed in the finals of the league to avoid decisive mistakes like Finkler’s “non-goal”.

The Scottish FA is in favour of GLT, but finds it too expensive. John Fleming told earlier on in The Scotsman that the price of the system would make it “prohibitive” for Scottish leagues to adopt the technology that instantly notifies a referee if the ball has crossed the line.

What are your thoughts now on use of goal-line technology? What else do you spend the money on?

2 thoughts on “Costs of goal-line technology”