The IFAB has released clarifications to the Laws of the Game 2017-2018. You’ll find them below. For a copy of the LOTG 2017-2018, check the page with laws of football. Want to test your knowledge? Check out the weekly quizzes.

IFAB has written in circular number 11. You can find them in different languages on the IFAB website.

“Following recent meetings of our Technical Subcommittee (TSC) and the Technical and Football Advisory Panels (TAP + FAP), the Board of Directors of The IFAB approved the  following clarifications to the Laws of the Game 2017/18 which apply with immediate  effect:

Modifications to the Laws of the Game

The number of substitutes each team is permitted to use up to a maximum of five, except in youth football where the maximum will be determined by the national association, confederation or FIFA.

The following guidance (which will become part of Law 4 in 2018/19) is to help competition organisers, national FAs, confederations and FIFA decide what can be visible on players’ equipment.

When interpreting whether a slogan, statement or image is permissible, note should be taken of Law 12 (Fouls and Misconduct), which requires the referee to take action against a player who is guilty of:

Any slogan, statement or image which falls into any of these categories is not permitted. Whilst ‘religious’ and ‘personal’ are relatively easily defined, ‘political’ is less clear but slogans, statements or images related to the following are not permitted:

When commemorating a significant national or international event, the sensibilities of the opposing team (including its supporters) and the general public should be carefully considered.

Competition rules may contain further restrictions/limitations, particularly in relation to the size, number and position of permitted slogans, statements, images and advertising. It is recommended that disputes relating to slogans, statements or images be resolved prior to a match/competition taking place.

When judging an offside position, the first point of contact of the ‘play or touch’ of the ball should be used.

This definition is required as the VAR use of slow motion shows a detectable difference between the first and last contact with the ball when it is ‘passed’.

Offence against a team-mate (or a team substitute/team official)

If a player commits an offence against a player, substitute or team official of his/her own team when the ball is in play:

Where two separate cautionable (YC) offences are committed (even in close proximity), they should result in 2 x cautions (YCs), for example if a player:

Throwing an object is a direct free-kick offence (not a handling offence) so a goalkeeper who throws an object and hits the ball/an opponent in their own penalty is sanctioned with a penalty kick and a caution (YC) or dismissal (RC).

The Laws of the Game are a crucial tool in making football, from grassroots to the highest levels, fair, accessible and enjoyable. The IFAB will continue to work to ensure that the Laws of the Game serve and protect the nature, fairness and integrity of the game.

Thank you for your attention and please do not hesitate to contact us should you have any questions or enquiries. 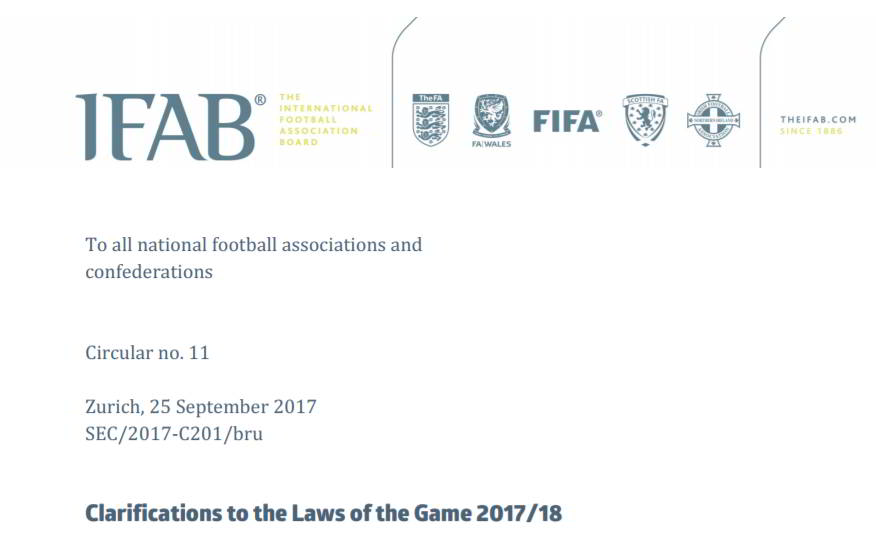