Charles Corver, former FIFA referee, has passed away at the age of 84 on November 10th 2020. That’s what Dutch football association KNVB has announced. Charles Corver was named Dutch referee of the 20th century by football weekly Voetbal International.

He officiated in four European Cup finals and the final of the Intercontinental Cup. And yet, despite his impressive career, his name is associated most often with that incident in the semi-final of the 1982. Do you remember? That’s during the World Cup when German keeper Harald Schumacher crashed into French midfielder Patrick Battiston. “Well, it’s not always your best performance that brings you fame,” says Charles Corver, when he was 80 years old in an interview on Dutch Referee Blog. “A single decision can linger in football fans’ minds forever. By the way, at the time no-one held that mistake against me; I even received a 9.5, the highest mark during the tournament, from my assessor. And the KNVB, UEFA, FIFA all assigned me to some pretty great matches later that year.”

(Thanks again to Ben from RefereeingBooks.eu for translating this story – much appreciated) 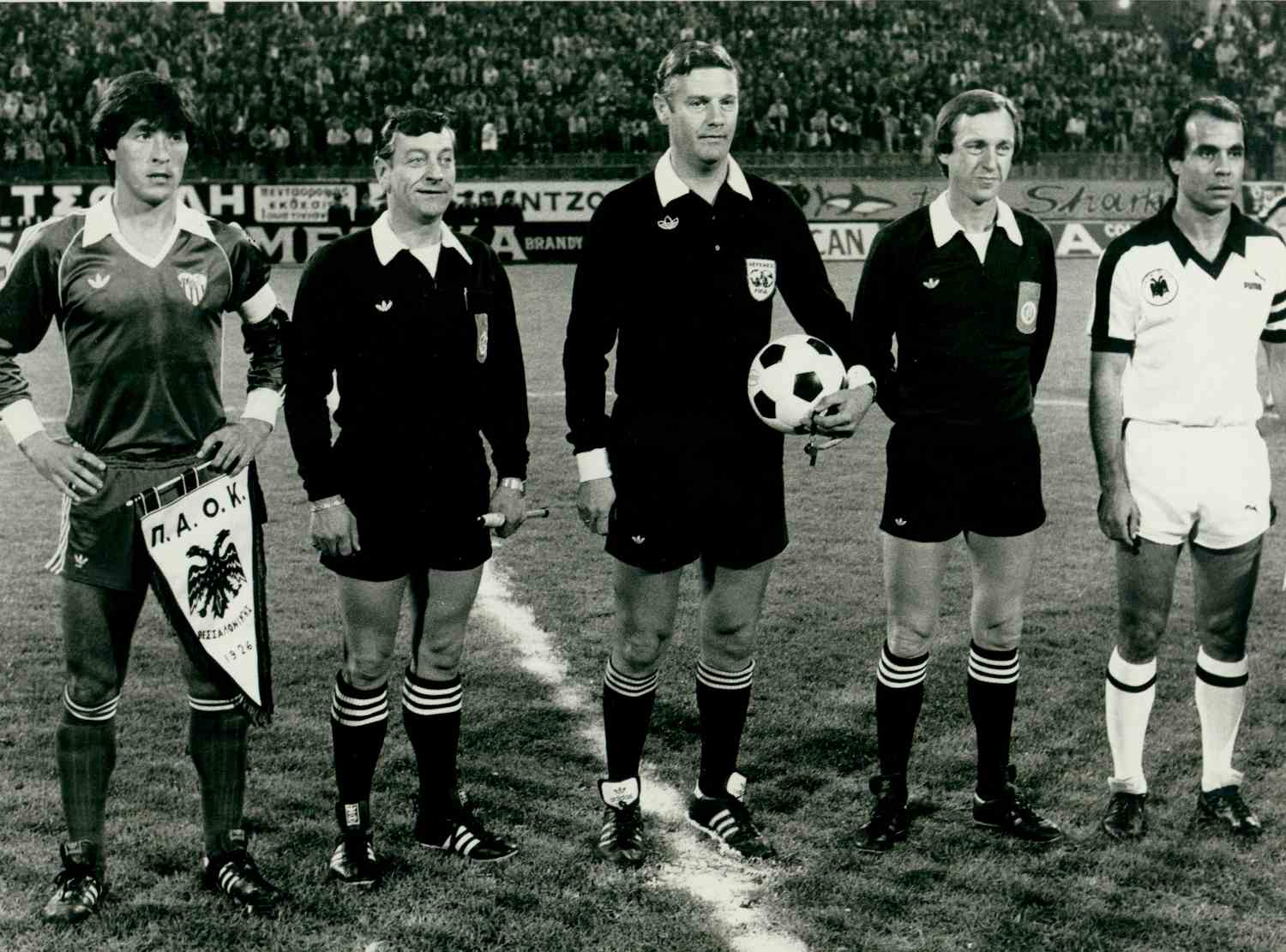 Charles Corver in Uefa Cup game between PAOK and Sevilla

“My fondest memory is the final of the Intercontinental Cup between Independiente of Buenos Aires and Atlético Madrid, as that assignment came totally out of the blue. In previous years these ties had become infamous for the violent on-pitch conduct and dirty tactics. So when FIFA selected me to officiate this important but likely very difficult tie, it came as a big surprise. Apparently, Artemio Franchi, who headed FIFA’s referees committee at the time, had a lot of confidence in my ability.” Charles Corver recalls the tie with satisfaction. “The papers, too, heaped praise on me for my performance.”

What does it do to you when in spite of your distinguished career most fans seem to remember you only for that Schumacher-Battiston collision?

“It was the best semi-final ever played during any final tournament on any continent. I never saw the incident, as everyone’s eyes in the stadium followed the ball. The moment I saw Battiston prone on the pitch, I went over to my assistant Robert Valentine from Scotland, who told me it was not intentional. Even Dutch television commentator Evert ten Napel admitted that he too followed the ball’s course, which went just wide. Throughout the rest of the match the players never gave me grief for the decision either. Yes, in retrospect, I should have sent Schumacher off, of course, for using excessive force.”

“The initial highly complimentary reviews were soon followed by severe criticism. I wasn’t too happy with that, obviously. But both FIFA and UEFA rewarded me with some great ties that final year of my career. They recognised my achievements, which was wonderful. Hardly had I come home from Spain when I was assigned for a European Championships qualifying tie. I officiated Denmark-England and a quarter final match in the European Cup. Yet that season had even more surprises in store for me, as I was selected to ref the 1983 UEFA Cup final between Benfica and Anderlecht.”

“Incidentally, FIFA assessor Latyshev, who himself had refereed the 1962 World Cup final in Chile, awarded me the highest mark of the entire World Cup tournament, a 9.5. Just goes to show that rather than for his career performance a referee can achieve fame for failing to see a collision. These days, you have your assistants and the fourth official aiding you through your headset, or there’s the video referee standing by to show you a replay. I had none of those things to help me back then, unfortunately.”

What, in your opinion, are the qualities and competencies a referee requires in order to grow as a referee and rise to the top?

“A key thing to remember is not to be arrogant but still enter the field of play in the belief that you’re going to nail this match. You should have confidence in yourself, in your ability. I was never nervous before or during a match. Of course, it is important to radiate confidence in your normal working life as well.” 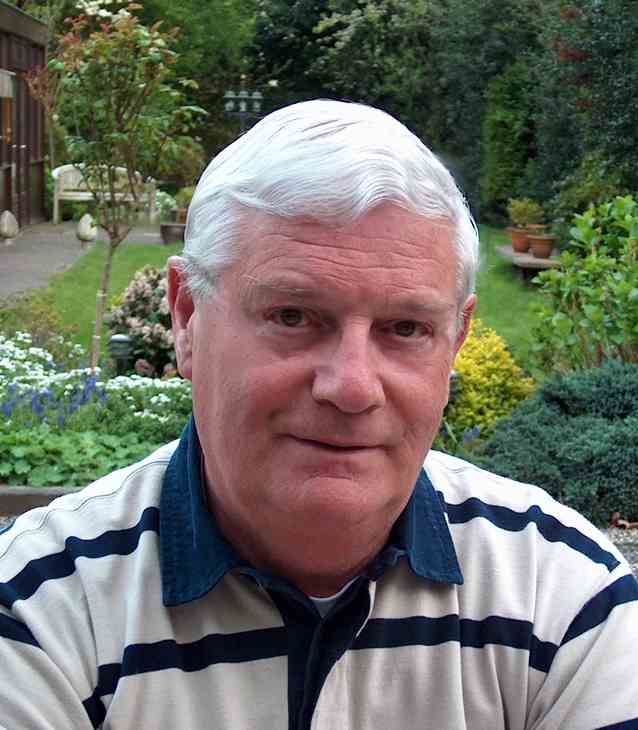 You used to work at Heineken. How did you combine your job and refereeing?

“I was national sales manager at Heineken for nearly 41 years. By the way, I would never have given up my job in favour of being a full-time referee, as some refs do nowadays. I should not like to be on call at least twenty hours a week. Training, yes, I did some intense training in my time, but I found it easy to combine with my job. Actually, I couldn’t have asked for a better job. Freddy (Heineken; the CEO of the Heineken conglomerate) gave me every possible support, enabling me to perform to the best of my ability. That way, it was possible for me to go the World Cup in Argentina for seven weeks and also to Spain four years later.

Not to mention all those European cup ties and FIFA internationals, not seldom outside Europe.  He did have one condition, though: I had to take and hand out business cards in as many as eight languages: Portuguese, Spanish, English, French, German, Swedish, Norwegian, you name it.”

When he finally hung up his whistle, Charles Corver was observer for UEFA, FIFA and KNVB for 22 years and a member of the KNVB’s disciplinary committee for 16 years.

The mood in Argentina, then under the control of the military junta led by general Videla, was dark and grim. “I was on the phone with my family a lot, telling them how I was doing. But there wasn’t really much to do for us in Buenos Aires. It was practically impossible to go out by yourself. If you wanted to leave the hotel, you’d get a detail of guards accompanying you. It’s not like we had any bad experiences, but in retrospect I can only say that being cooped up like that was bordering on the ridiculous. I did visit a lot of stadiums, though, as in those days it was normal for referees to also act as linesman or fourth official.”

Did you ever feel apprehensive or threatened during your career?

“I heard from other referees, like Jan Keizer, that some vengeful characters had thrown bricks through their windows. Of course, you’d only hear that later. I can’t say it ever happened to me. The only match that stirred up a great deal of trouble was at Feyenoord, where I awarded a penalty against the home team. After the match, Feyenoord directors offered to sneak me out the back door and escort me to my car as they feared the reactions of their fans. I did not want that. I just wanted to leave the stadium the normal way. Outside, I simply went up to the waiting fans, calmly explained my position and was allowed to get in my car and drive off without any trouble.”

What would you say are the key differences between football then and now?

“Referees who take up the whistle nowadays have a more difficult job, I’d say. Discipline, respect: they mean different things now. Back in my day, players still showed respect to referees with personality or authority. I was much impressed by Bas Nijhuis recently, when he took a hard line of action towards players constantly shooting their mouths off or making signs of disrespect. My thoughts: stop that stupid protesting.”

“I had a reputation of being anything but a home referee and allowing manly football”, Corver reminisces. It’s the way he played football himself during his 10-year career. He played in the first squad of TONEGIDO, an amateur club in his home town of Voorburg, near The Hague. “But I had a sixth sense for dirty play and gamesmanship.” It allowed Corver to get away with dishing out few yellows and even fewer reds during his long career.  “An early unmistakable, stern reprimand would usually suffice.”

Corver’s maxim was (and is): You cannot win the respect of anyone but through correct, courageous and consistent conduct. 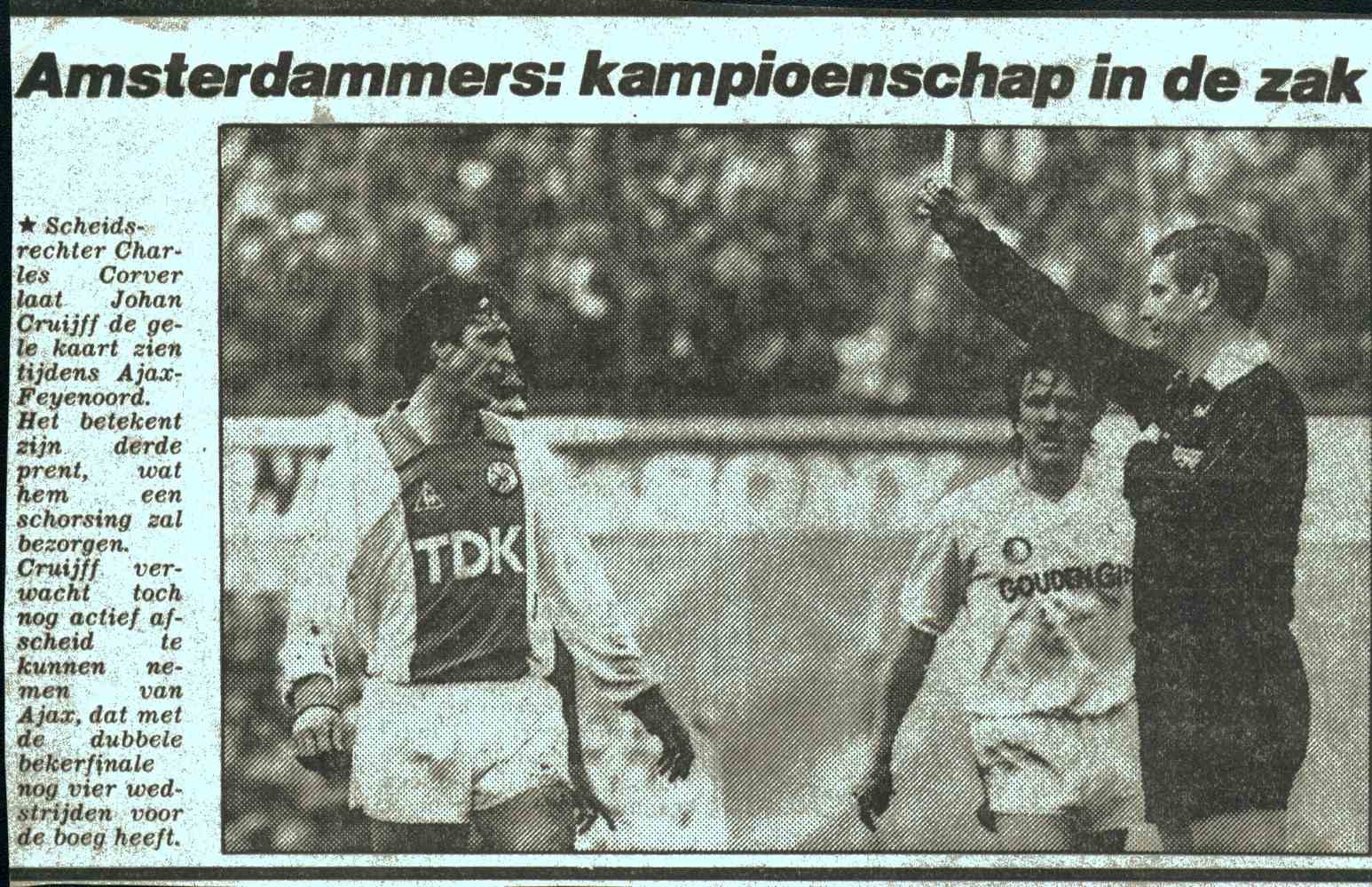 Recalling his first match reffing Johan Cruyff at Ajax’ De Meer stadium, Charles Corver says: “He protested my decision to award a penalty against Ajax by waving his hand in a gesture of disapproval. He’d grown a habit of doing that, and most of my colleagues tolerated it.  Not me. I immediately showed him a yellow card. After that, he must have thought: ‘Better be careful around Corver and stop doing that.'”

“The disciplinary committee came down on him hard as well. Still, in spite of this incident, I always had great report with Cruyff. He’d accept my authority. Twice when I reffed Barcelona he came into my dressing room after the match and gave me his shirt. My son is still proud to own those. Once players know the ref won’t let them fool around, they’ll stop doing it. As a referee, you do have the power to project a certain image and build a reputation for yourself.”

5 thoughts on “Charles Corver, Dutch referee of the century, has passed away at age 84”