Two brothers on the line during an Uefa match. Yes, that actually happened. In a 2014 Europa League match in Macedonia between FK Turnovo and Hajduk Split Richard Storey and David Anderson were the assistant referees of Arnold Hunter. Different name, you might think, but they got the same mother. A unique moment in international refereeing.

Dutch Referee Blog was able to interview the two brothers about this unique experience and their refereeing career so far.

I was also the first time that a refereeing team from Northern Ireland was a full Fermanagh and Western RA refereeing team, which is the smallest referee association in the country. “It is a historic occasion for the four referees and the Association and this also shows that the positive development, coaching, commitment and attitude from the members has been rewarded”, says the RA in a statement on their website. 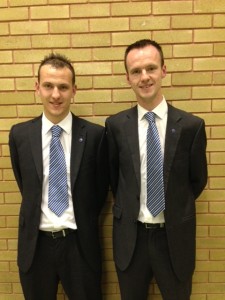 David Anderson and Richard Storey: first brothers who got appointed for the same Uefa match.

Richard Storey is born in 1986 and is on the Fifa refereeing list since 2011. David Anderson is a Fifa referee since 2015 and already officiated as AR during two Uefa Europa League games in 2014. He got his Uefa CORE-diploma for talented refs earlier this year.

How was it to become the first brothers who officiated during the same international match?

(David): “To start of with, Richard was appointed originally to the game, I was called in due to another assistant being unavailable. From the moment Richard received his FIFA badge and the steady progress I have been making locally we always hoped an opportunity would arise for the two of us to officiate internationally together. Richard would have always used this to motivate myself over the past few years as it was always a goal we had between us.”

(Richard): “The majority of the time that Arnold gets an appointment I am fortunate enough to be part of his team and as David has made rapid progress the past couple of years having attended the UEFA CORE programme I felt it was only a matter of time until he received an appointment with us in Europe. I was delighted for him when he was called in as a replacement for another assistant. It was amazing to think that I would get to experience a match abroad with my younger brother.”

How did you two become involved in refereeing?
(David): “Richard started first and a couple of years later he talked me into doing the course and since then we haven’t looked back.”

(Richard): “I started refereeing back in January 2003 as a young 16 year old and was at it a few years when I finally persuaded David to become involved also. This was nice as obviously refereeing is quite a unique “hobby” and there were not many of my friends who understood it so it was nice to get a family member involved to share experiences with him and even have a chat with him after our matches.”

How is it to have a brother who is also refereeing?
(David): “For me it is a huge advantage. Richard would be my number one support, he always keeps me motivated and I know if I have a problem I will always turn to him first. We definitely would not compete against each other, both of us are happy for each other whenever we gain a good achievement, we would be the first ones to congratulate each other and we would never think bad if one gained an achievement and the other one never. We would train together as much as we can but sometimes that is not possible, Yes we do live in the same house together, after games and that we will always talk that night about how it went etcetera. We have another brother who has done the course but he is not active.”

(Richard): “I also feel it is a huge advantage having my younger brother as an assistant referee. We can share experiences and learn from each other which is great. There is no competition at all between us. If anything I want David to do as well if not better than me as it makes me extremely proud. As I have a few years more experience than David I made the FIFA list in 2011, however I feel that if David keeps working hard as he has been its inevitable that he will make the list very soon and that will make me just as happy as I was when I got on the list. As for training we do train together when possible but sometimes we have to train alone due to us working at different times of the day. That said we both make sure that we are going out to train 3 – 4 times a week at least.”

When was the moment when you thought you’d be become an assistant referee?
(David): “I refereed for about two years at a decent standard but decided to try lines for a season and I really enjoyed it and preferred it to refereeing. Plus when I see the advantages it gave Richard I wanted to do it also.”

(Richard): “Like David I also refereed for a while at the start of my career and as I enjoyed it and still enjoy it to this day however I seen vast opportunities within the assistant referee route. We had FIFA assistant referees who were approaching 45 so therefore I felt I should give it my best shot to work towards making the international list as an assistant and to be honest it’s a decision I don’t regret at all. ” 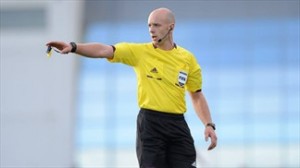 You two always work as a team with Arnold Hunter?

(David): “Richard would as the two of them are FIFA and travel a lot in Europe but we have worked together as a team in the league a few times. This is an advantage for me as we all know each other and are comfortable working together.”

(Richard): “I have basically worked with Arnold from day one of me being an assistant. We have climbed the ranks together and supported each other throughout. We both made the FIFA list on the same year and that was nice as we are both good friends as well as colleagues so we were both equally happy for each other. I feel we have a very good understanding on and off the pitch which helps the “team”. Arnold and I recently represented Northern Ireland out at UEFA for a Core development programme for international officials which was of great benefit to our learning and development. As for David he has worked with us on a domestic level numerous times and I really hope that he will feature with us on a more regular basis internationally in the future.”

(David): “My goals are to keep doing what I’m doing and hopefully when I am the correct age I will gain my FIFA badge and officiate internationally just like my brother and if possible officiate with him again internationally.”

(Richard): “Since reaching the FIFA list my goals have always been the same. I hope one day that Arnold makes the elite category within UEFA so that we as a team could officiate at the very top level in competitions such as the Champions league. I know this will be extremely difficult but if we continue to work hard and take it one game at a time I think it is possible as we all have a great attitude towards our learning and development. We also are fortunate to have age on our side.”

Liked the article? You might also want to read the interview with referee Arnold Hunter on the Dutch Referee Blog.

12 thoughts on “Brothers on the line: unique moment in European refereeing”