Aran Hodgkinson is a young referee from the UK who got the opportunity to referee and train two weeks in Portugal. What a great chance for him. 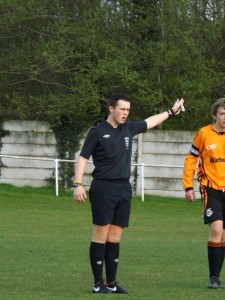 Aran Hodgkinson: young referee who got the opportunity to officate in Portugal.

On his blog Aran Hodgkinson shares his experiences with the world. The first day in Portugal was a big surprise for some of the guys there: “To the lads disappointment there was no full English breakfast, just cereal, fruit and ham and cheese. A proper athletes breakfast!!”

After a training session on day 2, he also got to referee. In his last week he even got the opportunity to whistle a youth team from Benfica. He wrote:

“My third match in Portugal was between Benfica U14s team and and Scottish regional team consisting of players who were all at professional teams in Scotland like Motherwell, Inverness and Aberdeen who had come over to Portugal for a 3 day training camp, and whilst over here they had organised to play a game against Benfica U14s, of which I was asked to referee. The experience I would gain from this game would add even more to what I have already gained whilst being over here, and also a fantastic opportunity to referee a strong Benfica team!”

Read all Aran’s stories on his blog.

Good luck with your career, Aran!