Dutch professional referees Allard Lindhout and Martin van den Kerkhof climbed the Mont Ventoux mountain for a charity that helps people with ALS, also known as Lou Gehrig’s Disease. “We were inspired by our refereeing colleague Reinold Wiedemeijer. His father had gotten this disease”, Lindhout says. This disease causes paralysis and people eventually die because they can’t breathe anymore. The Jupiler League, the second football level in The Netherlands, is sponsor of the charity Stichting Tour du ALS. Lindhout was asked by Wiedemeijer to cycle the tour and he was happy to support the good cause. Every participant brings in 1500 euro’s of sponsor money. (Check sponsor options for Tour du ALS) 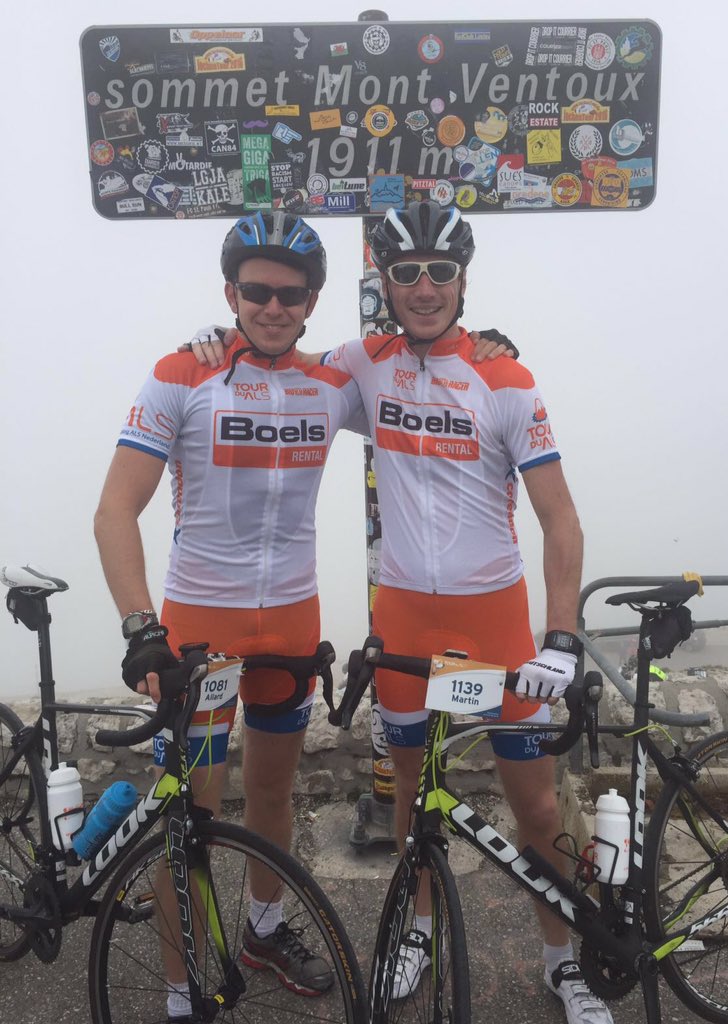 The training sessions for referees are quite different with cycling trainings, is Lindhout’s experience. He’s currently a junior referee in the Dutch professional football. “As referee you focus on running and sprints, but with a good physical condition you can achieve a lot on the bike as well”, he says. “The football competition was over during the last month, so I could focus on cycling then. Normally I do train on the bike, but only to loosen my muscles. Absolutely not for making lots of kilometres.”

The highest point of the Mont Ventoux is on 1912 metres and the mountain is climbed a lot during the Tour de France. It’s climb of hors catégorie, so incredibly difficult to climb. “It was very heavy. My heartrate was very high”, assures Lindhout. “The event is great. It’s a euphoric feeling reaching the top of the mountain.”

Lindhout was impressed that many patiens with ALS disease were present during the cycling race. They can experience themselves how everybody cycles that mountain for ‘their’ good cause. “I even saw patients cycled up the mountain by their family. That’s so impressive.”

Now the event is finished, it’s time for Lindhout to relax a little. The referee trains the next weeks to maintain a certain physical fitness level, but not to challenge it. “That means I’ll go out for a run and do some sprints, but all at lower pace. The last week of June I’ll take a week of full rest.” After that period the preparation of the new season starts. “From then on it’s lots of hard work towards the new season”, Lindhout says. He has officiated one full season in the Eredivisie at the moment. “My goal is to become a stable factor in the Dutch top league. I want to gain more experience during the 2016-2017 season and finally I hope to get a promotion in the senior referee group.”

Want to know more about physical training for referees? Check out the interview with the physical trainer of the Dutch top referees.