Aled Fellowes is a Welsh referee and he is going for the second time to the Ibercup in Estoril. On this story he writes about his past experiences (he has been there in 2014 as well) and reports his experiences as referee throughout the tournament.

How Aled Fellows experienced the 2014 edition

In order to get to the Ibercup Estoril I had to apply to the tourament through Tournaments Abroad, the application process started in Early November, it took roughtly 6 weeks before I was informed I was accepted. As a Welsh Referee the Welsh FA don’t take referee groups to such tournaments which meant I had to apply as an individual.

Last year out there I enjoyed the experience I had, it’s a fun tournament and it’s played in a friendly manner, I made a lot of new friends and got a lot of new contacts out there which made me want to attend again. It’s a good tournament to attend, it’s as much about the refereeing as it is socialising with the other referees and a lot is there to be learnt, it’s also quite a big tournament with loads of teams involved and is known world wide and is definatley worth attending no matter where you are from it gets your name known so is one to apply for.

Last year I learnt a lot about the European style of play, it’s a lot more physical in the play where usually in the UK free kicks would be given out there you leave it go as both players are at it, it also helped my man-management skills as a referee and also aided my communication with players who are non-English speakers, I also was able to develop my French skills whilst refereeing French teams.

This year I’m expecting much of the same, last year was an excellent tournament which was played in good spirit. I’m also expecting some really strong, physical games and some excellent footballing displays from the mixture of professional academies and local ameutur teams present. I’m also looking forward to meeting old and making some new friends. 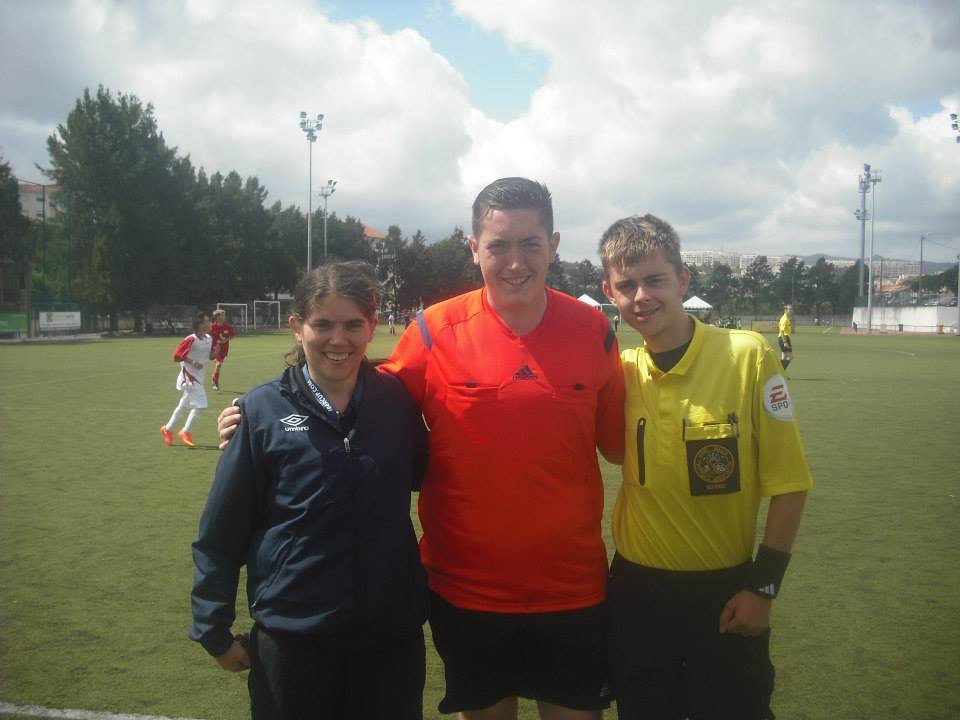 The day started early, a 7:00am start wasn’t what I had planned but duty called. My games were only 10 minutes away by train at a ground called Salesianos which is in Estoril. My first game was one of the first to start with a kick off of 8:45, it was between a South Korean team Seoul Daedong and a Spanish team Vasconia, it was in the U11 category of tournament which meant as a result it was 7-a-side with no offsides. Both teams had players who spoke English and were able to provide a good communication path through the team if there were issues however both teams were there to play football and not make my life hard and it was an easy game to referee.

My 2nd game was at 10:45 and was between Reading FC, a professional academy team and Brisbane from Australia, sadly this wasn’t Brisbane Roar and was a team pulled together by the state of Brisbane and sadly it became a bit one sided and Reading emphatically won the game 17-0.
I then had a break for food in which time i returned to the free accommodation to change kits over and also got food at a very nice beach bar.

5PM saw my final game of the day, this one in the U9 category with 2 Portuguese teams, Belenenses and a local team Torre, English generally at this age is a bit of an issue however Torre had 4 players who were fluent in English which was a great help to the game as they were able to help out in situations where players didn’t understand what was going on making things a lot clearer.

The day finished at 6pm and a relaxing evening with another visit to the beach bar for food and a nice cold drink to chill.

The weather was very hot, this took it’s toll on some players, excesses of water are available at grounds to help with hydration however plenty of of water isn’t always enough, sports drinks which aren’t the cheapest are the best for rehydration.

Wednesday looks a lot cooler so should be a lot better for officiating.

2 games as assistant referee were in store for me at Jamor where the national stadium (Estadico National) is based.
With me was English referee Karl Barron.
The game was refereed by a Liverpool County FA referee Ben Chance. The game itself didn’t live up to the hype and a one sided match proceeded to follow it, it was a real shame as the match had some great potential to be a thriller!

The second game who’s referee I won’t name was a lot more physical and needed a strong referee, sadly the strong referee never turned up and the performance was poor, the game was physical and challenging and could’ve done with a few cautions earlier than they came to cap things off early but it never came.
The afternoon was free for me with no games which led to me deciding to head to Salesianos to watch young Gibraltar referee, Seth Galia.

The games were easy games bar 1 which needed a strong handed approach rather than warning resulting in 4 cautions being issued however all the games were extremely well handled in such searing heat.

Day 3 was unusual, just 1 game as 4th official with the referee and assistants being from Manchester. The game was a tricky game for the referee who did an excellent job of keep control of the game and earning himself the U18F final in the process. My day was done after that which left plenty of spare time to head off to Lisbon for the day. Day 4 saw a return to the 7-a-side refereeing 2 U12 games, they also brought the first major problem with a player thinking it would wise to dissent a decision after getting cautioned, that earned the keeper a red card and made life difficult for the team. The 2nd game of the day was simple with nothing major, another trip into Lisbon was in order to this time visit Benfica

July Day 5 was the end of my tournament with a U10 semifinal, this was an easy game to referee and had no issues, the afternoon saw me deciding to watch some of the younger referees who were at the tournament to help them with their development as referees. Day 6 was finals day and with no finals I and my new mates Kyle and Ryan opted to go have a stadium tour of Benfica’s ground as the finals were being played at Estoril Praia’s ground which was a good walk from Estoril train station. Benfica is an amazing ground, one I’d like to referee at in a few years if I become a FIFA official. The final night saw me and the left over referees have a relaxed night before heading home to following day.