Roger Federer will try to win the Davis Cup in tennis this weekend. He’s a great player from Switzerland who has performed on top level for a very long time. How does he keep that good? And what characteristics of him would be useful for referees too? I’ve pointed out 3 Roger Federer characteristics referees should have too. 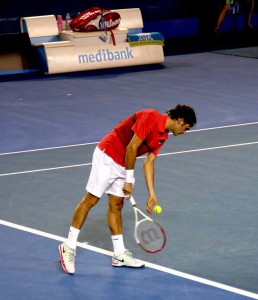 1. Working extremly hard
Federer is training hours. Long days on the tennis court. It requires great effort to do what he does during practice. That’s what referees should demand from themselves. Go to your RA’s training sessions. Rainy day? Go! Long day at work? Go! That hard work will pay out in the end and you’ll be topfit during your matches in the weekend.

2. Being consistent
Watching the Swiss tennis player it looks he doesn’t get tired while his opponents are visibly suffering from all the running and smashing. Federer’s play doesn’t (often) have a relapse. As a referee you don’t have an opponent, but you definitely can show you are the one who gets better. While players get tired, defending gets sloppy, you can show you’re physical ability is still awesome. You can show you are still able to do a 60 metres sprint in the 90th minute and make that important call: penalty or a dive? If you’re still on the middle line you do something wrong. Don’t spend all your energy in the first half, save something for the seond half and be able to make those match deciding decisions from a good position.

3. Having mental strength
Roger Federer is not a tennis player who uses brutal force: hard smashes or services. He reads the game and plays with intelligence on the court. He gives that lob nobody expected – especially not his opponent. He knows what to do in difficult situations and acts upon that.

That mental strength is a quality every referee needs. It’s not just running hard and being close to a situation. Yes, that helps you sell a decision better, but that’s not all you need. If the game gets tougher you should be able to read the game, make the right call and keep calm.

But how do you create mental toughness? More on that in next week’s blog post.