Arnold Hunter from Northern Ireland is happy he officiated such beautiful matches since he became a referee. Next Saturday he’ll be up for another top match in his home country: the cup final between Cliftonville and Crusaders. 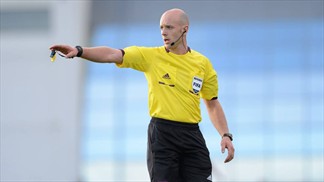 How do you combine refereeing with your private life and work?

“I am very fortunate as I have an extremely supportive and understanding wife and family. Without my wife looking after our young daughter and my parents and brothers working and helping out on the family business (dairy farm), I would not have been able to referee as much as I have.”

What are your refereeing goals and what is your best moment so far?

“When I started my refereeing career I didn’t really think of long term goals, more like taking one step at a time and not to let myself or anyone else down by working hard at my game and improve my understanding of an evolving game. However this is changing more and more, as I developed and grew as a person and a referee.”

Arnold Hunter is a referee for eleven years now. “As the seasons changed along with the levels I was refereeing, I found myself falling more and more in love with this side of the beautiful game and as such my aspirations have grown. However I still adopt my first goals of working hard at each and every game, to learn and develop and not let myself or anyone else down.”

“I’ve been very fortunate the opportunities refereeing has afforded to me, in particular in the summer 2012 U19 finals tournament held in Estonia. This was my first time to be involved in such a prestigious tournament.”

“The teachings and experience received from the UEFA observers and the friendships made during these two weeks which culminated in having the honour of refereeing the semi-final Spain v France. An epic encounter that finished 3-3 after extra time with Spain winning on penalties. A career high I will treasure for the rest of my life and one I would love to experience again.”

Do you see chances for a referee from Northern Ireland to reach the Elite group?

“I’ve adopted a philosophy of never say never. I realise how extremely difficult it is to achieve elite status, no matter what country you are from, however it is an ambition of mine.”

“The help and support I and my European team have received over the years from the Irish Football Association (IFA) Referee Development Officer, Alan Snoddy, has been invaluable. His valued knowledge, advice and experience on the world football stage is immense and one I hope will strive us to excellence.”

What would be your advice to (young) referees?

“One of the observer’s said to me during the summer in Estonia if you continue to work hard and believe in what you do, you will reap the benefits.”

Read part 1 of this interview.

You also might want to see the short video interview referee Arnold Hunter did after he got the appointment to officiate at 2012’s UEFA European Under 19 Championship Finals in Estonia (3-15 July).